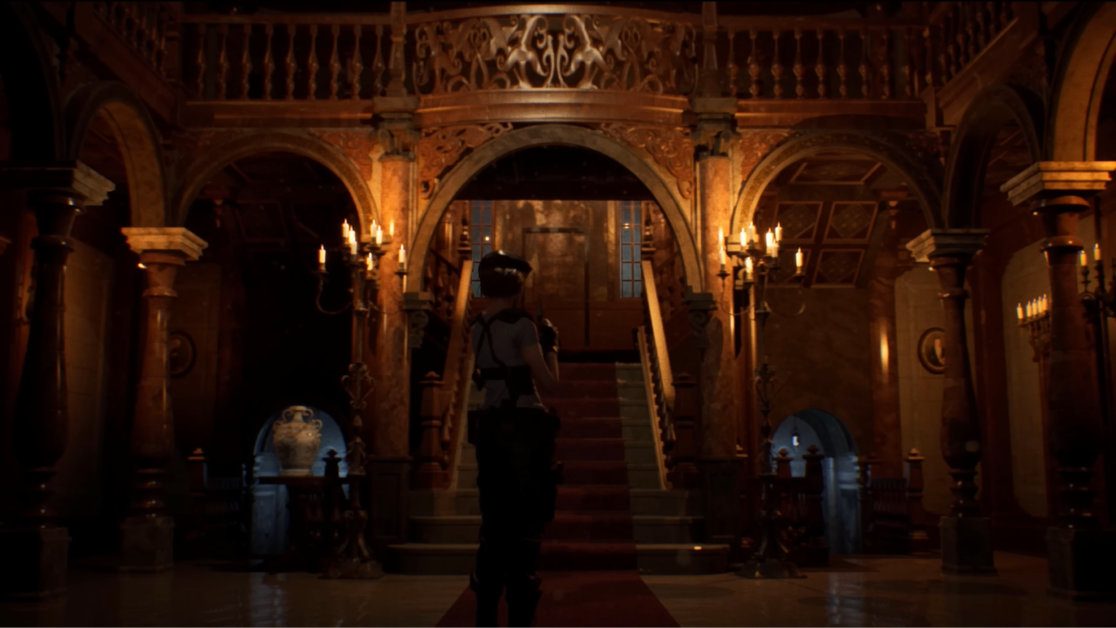 The Resident Evil remake in question is fan-made and developed by Luiz Rodriguez. An impressive trailer was uploaded to the YouTube channel, RE Biohazard. The name of the fan remake is “Biohazard: RE1 Classic Edition”.

At the beginning of the Biohazard: RE1 Classic Edition trailer, we see Jill Valentine playing Moonlight Sonata on a piano. This particular scene is one of the most iconic puzzles in the RE franchise. Once Moonlight Sonata is successfully played, it opens up a secret passage behind the greenhouse which enables the player to acquire the Gold Emblem.

Later in the trailer, we get to see the halls of the Spencer mansion, populated by unfortunate Umbrella employees, now turned into undead zombies. We also get to see the scene in which we are first introduced to Yawn, a giant snake that is the undoing of poor Richard Aitken.

This fan-made remake looks incredible harnessing the power of Unreal Engine 5. Not only do the lighting and reflections look amazing, but the zombie animations also manoeuvre in a more realistic manner.

What I will say, however, is that much of the assets look to be taken and enhanced from the Resident Evil (2002) remake. That being said, some of the assets are new or upgraded, as, in one scene, we clearly see a portrait of the mansion owner, Dr Oswell E. Spencer.

Nonetheless, this Unreal Engine 5 remake certainly looks to be, at the very least, a visual upgrade to its source material. Furthermore, as a fan of old-school survival horror, I appreciate that the tank controls and fixed-camera angles have been retained.

Just as the trailer comes to an end, we see the message “now in development”. I assume that Luiz Rodriguez intends this remake to be playable at some point. I say assume because much of the descriptive language is in Spanish. So please excuse my ignorance.

An official remake is on the way!

If this Resident Evil remake does one day become playable, hopefully, Capcom won’t pull it down too soon. However, if the publisher does pull this remake, might it suggest that a new remake could be on the way? Maybe.

Are you impressed with this fan-made Resident Evil remake? If so, share the love across our social media channels.