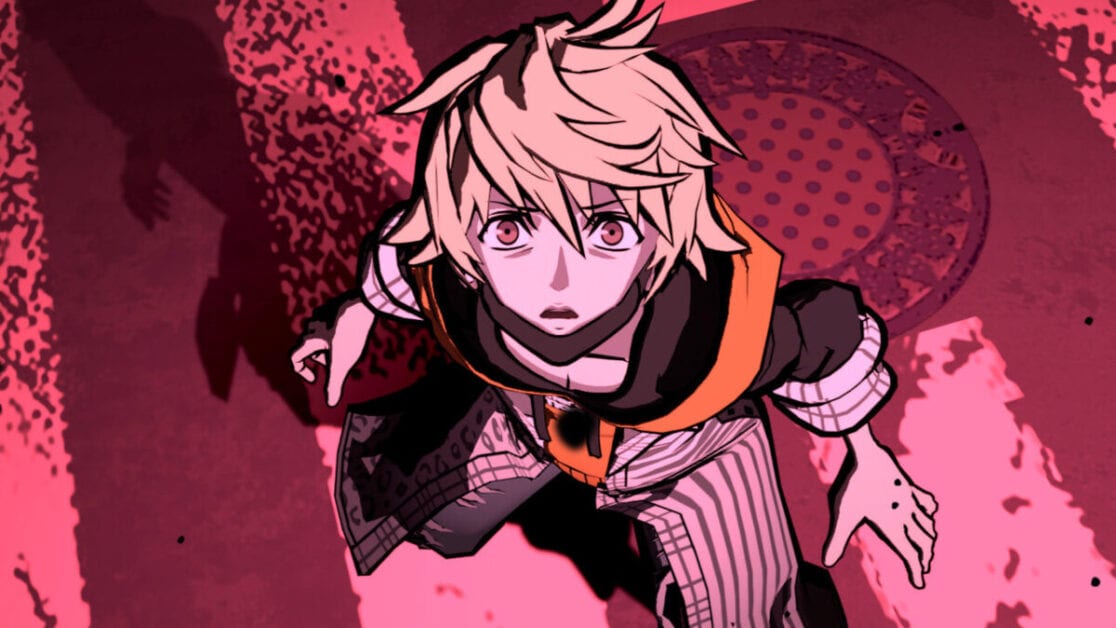 After getting some divisive ports, and numerous teases over the last fourteen years, we finally have an actual sequel to The World Ends With You. We were treated to a very strong demo earlier this year, so expectations were higher than ever.

The city of Shibuya is a dangerous place to be right now. More and more people are getting sucked into the mysterious Reapers’ Game, never to return.

We start our adventure by being introduced to protagonist Rindo and his best friend Fret. A strange monster attacks, leading the pair to seemingly be killed, and wake up trapped in the game themselves. While in this state, they are essentially ghosts, only visible to other players and the titular Reapers who oversee the event. Here teams are forced to complete a series of challenges each day to avoid being erased.

At the end of the week, a winner will be chosen and granted any wish they desire. Our intrepid pair decide to go all out, desperately fighting their way to the top of the leaderboard to literally win their lives back.

The cast all have great chemistry with each other, easily having some of the most enjoyable friendships in gaming. It’s also huge, bringing in entire teams of players, old and new, to fight in the desperate struggle for freedom. Amazingly, none of the returning characters overshadow the new faces, and they manage to mesh into the new situation nearly seamlessly.

This game takes a very different approach than the original in its script. While the first game was a tight character study, watching introvert Neku learn to open up through making his first friends, this game is much more about the bigger picture.

Rindo here is much more socially capable, and his team’s character development is much more subtle, often taking a back seat to the mission to free themselves from the purgatory they are trapped in.

While spreading it very thin, the script manages to ram everyone we meet with charm and at least a modicum of depth. There are almost too many rivals, and their screentime draws away from the actual villains, meaning that some of them are much less developed than you would like.

The first two acts are very well-paced but don’t leave you much breathing room to appreciate all of the character and story beats. The final act has to cram in a lot, ending up very similar to Kingdom Hearts 3 in this regard.

While NEO does a much better job here, we almost could have done with an extra few days of the game to spread out some of the plot points and elaborate on things more. There are plenty of loose threads that could be used for a third entry or midquel, but we do get a proper narrative finish for characters new and old, and it happens to be very satisfying.

The entire universe of The World Ends With You is built on a gorgeous graffiti style that will never get old for me.

You know that it’s all about the aesthetic in a game when your ‘armour’ is fashionable clothing, and how popular the brand is can affect your stats.

If your characters don’t reach a certain style level you won’t even be able to get benefits from your clothing, so fashion can be a dangerous thing here!

With all the brilliant colour choices and amazing character designs, even some of the flatter characters manage to stay burned into my brain. There may be fewer boss designs than the original, but they all looked stellar, one highlight being fighting a skyscraper-sized kitty.

The soundtrack demands your attention, every song is an expression of the world around you, and while the new tracks embrace a variety of different musical styles they fit well with all the classics of the original.

Comic-book inspired panels are used to make up the non-cutscene story sections, and they look brilliant, allowing the raw talent of the art team to run wild. They manage to perfectly capture the attitudes and energy of the team in every scene, you hardly notice they are still images at times.

The graphics look amazing in docked and handheld mode, bringing the charm of the original into 3D seamlessly. With hundreds of different attacks to equip, you’ll never get bored of seeing the effects in action. From lightning bolts to whips made of barbed wire, these attacks always know how to grab your attention.

The game is divided between combat and puzzle solving using the innate superpowers of your main characters. Your main trio have the powers of time travel, Inception-style mind diving and reminding people of things long forgotten, and the game uses these in loads of different ways.

Every day sets a new challenge, and the creators were careful to balance the actions carefully to prevent burnout. One day might be a battle royale which is nothing but fighting whereas the next day was all solving trivia quizzes about the kinds of things you’d have spotted through Shibuya.

While the game structure harkens back to classic JRPGs, the combat very much embraces the modern style of action pioneered by the original. You can equip one of over 300 different powers to each of your team members. Each character is bound to a different button, meaning that as your party expands your options grow.

All the attacks have their own cooldowns so they can be used simultaneously, meaning you can absolutely fill the arena with an insane amount of anime explosions. Be warned though, when you unlock a fair amount of party members and unleash all your attacks at once you can get some minor slowdowns on the Switch.

This game sets the new standard that JRPGs should follow, with so many amazing features to speed up and slow down the flow of the game. You can change the difficulty, amount of encounters or even your own level at the drop of the hat for nearly the entire game. As you make more friends throughout the story you just unlock more and more of these quality-of-life features.

Both English and Japanese audio options are available, and the casts for both do a stellar job. While the returning voices from the original are a treat, the new cast really makes you care for the characters and make up for their slightly rushed development with some very emotive acting. One annoyance is that you can’t skip any cutscenes, but you are able to fast-forward when you replay days.

NEO: The World Ends With You is a modern masterpiece, and proves that Square Enix still have the magic touch. Fans of the original have no excuse not to pick this up, and anyone who is curious would have a great time too.

This game is very much a sequel, and despite the first two acts of the game being almost entirely playable stand-alone, the third act is packed to the brim with callbacks and continued plot points that may confuse a player unfamiliar with the original story. Even fans of the original DS game may be confused, as elements that were only present in the ‘Final Remix’ Switch port are treated as known quantities throughout.

However, if you desperately want to avoid the original, the point of view firmly remains with our new cast of characters, so you can join them as they learn more about the original organically.

This is one of the most stylish and heartfelt games I’ve had the pleasure of playing in years. It gave me everything I was looking for, and so much more I didn’t even know I wanted.

NEO: The World Ends With You was played on Nintendo Switch for this review.