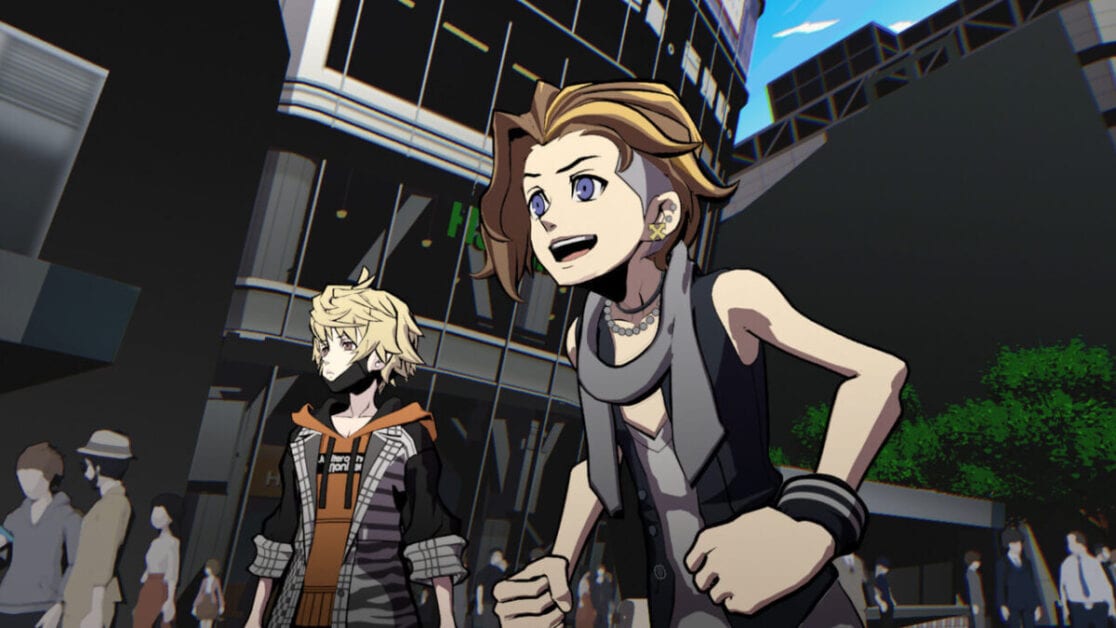 Ahead of the release, we decided to take a quick dive into the demo. So let’s see if it’s looking likely to meet these high expectations!

What is NEO: The World Ends With You?

These games are stylish JRPGs from the chaotic minds that brought you Kingdom Hearts. Filled with Tetsuya Nomura’s wild fashion and rollercoaster plot beats backed up by amazing writing, there’s no doubt why these games have had fans clamouring for more.

In the original game you played as Neku, a recently deceased teenager living in the bustling Shibuya area of Tokyo. Awaking as an unseen ghost-like entity, you are now trapped within the Reapers’ Game, a seven day challenge where the winner has a chance of being brought back from the dead. Teams of two are mandatory, thus you team up with unwilling allies over the course of this twisting tale.

Here in NEO we are introduced to a fresh pair of faces, best friends Rindo and Fret. After a disastrous monster attack seems to kill the teens, they are sucked into a strange new version of the Reapers’ Game.

There are new Reapers in town and they’ve changed all the rules, letting players form clan-like groups and hash it out in a wilder competitive arena. Teaming up with a mysterious man from the original game, ‘The Wicked Twisters’ set out to win the competition and come back to life.

To progress in the Reapers’ game you must battle against monsters known as ‘Noise’ and complete cryptic daily missions. These missions mostly consist of solving puzzles and fighting bosses with weapons that take the form of collectable pin badges packed with different super powers.

While it is a sequel, you won’t need any prior knowledge to fully enjoy this demo at all. They do an excellent job introducing you to the world, the rules and a sample of fun new characters. There’s only one returning character from the original game so far, but not knowing his history doesn’t detract from anything. If anything, it may provide you with a fun reason to go back and try the original game.

Falling in love all over again

As someone who was really invested in the original, I was worried that this adventure would be treading the same ground. This taster has put all my worries at ease and made me so excited to get my hands on the final product.

While still very much a part of the same universe, they’ve cleverly twisted the tone and rules, meaning both new and returning players will have a lot of questions to get invested in. As this is just a taste of things to come, there are plenty of ways the plot could fail to deliver. From the track record of the team though, I’m fairly certain it’s going to go the distance.

The fully animated cutscenes looked amazing, the 3D models look great, and their distinct movement patterns tell you a lot about their personality even before they open their mouths. The comic-book style panels that make up the majority of dialogue are dripping in style, packed with more visual humour than the entire original game put together.

While you did see other players in the original, they were few and far between, the cast being incredibly tight. Here you get to see multiple teams trying to win the top spot straight off the bat, and hear regular updates as to their progress. This adds a great sense of urgency to your mission and makes the world feel much more alive.

Coming into the Reapers’ Game with a friend is a genius way to shake up the story. You feel less isolated, and always have at least one confidant to trust with your secrets. This is different from the original where you are forced to help enemies for information all the time.

The new characters are an absolute treat and managed to get me far more invested than I expected. Rindo and Fret are full of life and humour, a stark contrast to the anti-social outcasts we saw in the original.

Their friendship feels very real and they feel like equals, Fret is no sidekick. Assuming he doesn’t pull some kind of insane betrayal when we get further on in the story he will definitely be up there in terms of my favourite friends in gaming.

How does it feel to play?

Aside from a few minor slowdowns in the busier areas of town, the demo ran well on the Switch. Combining the bright colours and crazy clothing with the graffiti-based design of the monsters really make this world stand apart from the sea of JRPGs set in modern Japan.

While not on the scale of The Witcher 3 or Persona 5, the large area of the city that you get to explore feels really active, and the characters often take the time to listen in on the thoughts and feelings of regular people they pass.

The sections we get to play through here are incredibly linear, although as The World Ends With You series are much more story and character focussed than a lot other JRPGs that wasn’t a total surprise to discover going in. A lot of this linearity comes from the tutorial elements of these first few days, but as there are a lot of features to cover this is welcomed.

The writing might rub you the wrong way, being incredibly quippy and having a very anime-styled script. However, the actual story is interesting enough that you can ignore the jokes and whacky individuals if you don’t enjoy them.

The combat is much more streamlined than the original game, but by no means is that an issue. You take control of three party members at the same time, and pick what kind of attack they’ll have based on the pins you give them.

You can’t just spam one character as they will need to recharge, but the game cleverly motivates you by rewarding you for constantly switching your attacks up. This almost makes the combat feel more like a rhythm game at times, although one where demonic graffiti gorillas are trying to squash you.

This game brings back some of the great quality of life features of the original. Encounters aren’t random, instead being selected by the player from the overworld, you can also chain many enemies for massive loot and experience multipliers. Your characters have the ability to read the minds of NPCs, so whenever you get lost you can always get hints and tips that will lead you to your next location.

You’re allowed to level up to 15 in the demo, and I did that in no time because the combat was so fun and flashy I just kept going back for more. The amount of different powers you get is a little bit limited, but there should be many more when we get access to the full roster.

Should you give it a go?

We thought that the NEO: The World Ends With You demo was amazing. If you’re even slightly curious you should definitely give it a go.

The demo gives you full access to the first two days of the game, giving you the chance to get a feel for the gameplay and a little taste of the story.

If you do end up completing it and want to play the rest of the game without any foreknowledge, I would make sure to skip the trailer for the main game that they play you at the end of the demo. This video shows you the names and teams that you haven’t met yet and I think the natural introductions that were done in the game were good enough not to spoil the upcoming ones.

While having two days of a seven day challenge might seem like a fair amount of the game being given away, the original’s plot ended up going far past that original seventh day so it can be presumed there will be plenty more content in the full release to sink your teeth into.

You have a month to make up your mind, and as a nice treat all your game progress and levels will carry over to the full version if you choose to buy it.

If you’ve got thoughts on the demo or the original game, please feel free to let us know in a comment over on our Facebook or on YouTube!

The NEO: The World Ends With You Demo was played on Nintendo Switch for this article.