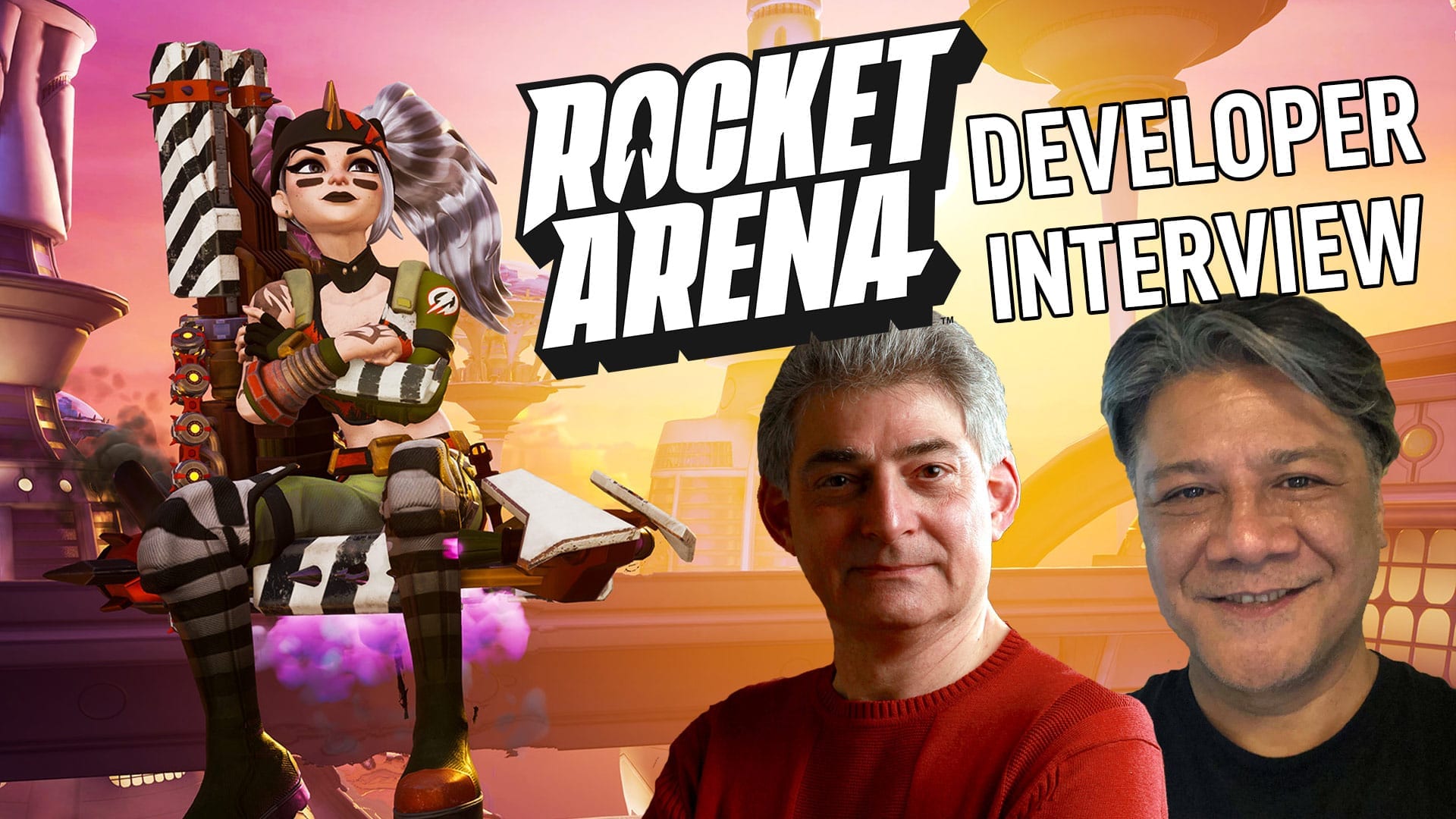 Rocket Arena released on 14th July for £24.99. When I reviewed it I was impressed with what it was doing. I did wonder though if people would be put off by its price. Especially with it being a multiplayer only game accompanied with some elements usually reserved for free to play games, like battle passes.

It’s not been a kind time for Rocket Arena since launch. On Steam, at the time of writing, it’s struggling to get more than 100 players according Steam Charts. It does seem that EA and the developers, Final Strike Games, preempted this possibility though. How? With crossplay integrated into the game at launch.

This, combined with it being free on Origin Access and a big price change (it can now be picked up from £3.99 on most platforms) has helped breathe some life into the community. Hopefully this will help the community continue to grow.

Rocket Arena takes inspiration from a lot of things. On the surface it’s an arena shooter, but underneath there is a layer normally reserved for fighting games like Smash Bros. Build up a damage meter to send your opponent flying further, until they fly off the map. It’s a fairly unique take on the arena shooter, with game modes and frequent updates adding more variety, but that’s not the only thing that helps the game stand out.

Rocket Arena captures the spirit of 90s and 00s cartoons with its characters. There’s a good reason why that is. The team hired Emmy-nominated writer Len Uhley to help expand its game world and lore, whilst adding personality to the characters.

Len’s credits include episodes of many classic Disney channel cartoons such as DuckTales and Chip ‘n’ Dale. Then, in the 00s he was writing iconic episodes of Static Shock and Ben 10. It’s easy to see why the team at Final Strike Games reached out to him to help bring Rocket Arena’s characters even more to life and give him his first video game credit.

Working on a video game for the first time

I recently had a chance to speak to him and Rocket Arena’s Senior Art Director Dev Madan. Both were keen to tell me about the game and Len couldn’t wait to tell me how he got involved.

“My agent got a cold call from Final Strike Games at the end of 2018. All of the guys were huge fans of the shows I worked on 30 years ago when I just started in animation. I was one of the writers on TaleSpin and they had watched the mini series that was the lead off for that series, and they said ‘let’s get one of those guys that wrote the funny dialogue for Don Carnage’, who was the comic villain.”

Hearing Len talk so enthusiastically about his past was great but his words about Rocket Arena were heartwarming.

“They were fans of mine and I quickly became a fan of what they were doing. They had spent probably 2 years already, before I came on board, designing this world. When I saw it my eyes bugged out. There was this beautiful design Dev and his team had created; this feature quality animation, these beautiful environments and these hilarious characters. Based on their foundation I got the chance to work on the characters more and their inner relationships. What a way to get introduced to a whole new world!”

It sounds like an experience that was hugely positive for Len transitioning into a new medium for the first time. Part of that is down to the wonderful work of Dev and his team. Dev’s career has seen him work across comics, with beloved characters like Batman, Judge Dredd and many more. He’s also had a long history in gaming, working on the likes of Plants vs Zombies and the Sucker Punch classic, Sly Racoon. In fact he was one of the co-creators of the stealthy critter.

Appealing to the masses

One thing I’d experienced when playing Rocket Arena is the range of people that were playing it. I asked Dev how the team went about making a game that could appeal to such a wide audience.

“It all revolves around rockets. The characters, the world and everything are bigger than life. It’s bright, colourful, big and bouncy. We take it seriously but it’s not afraid to not take itself seriously. It’s all about fun. It goes right to the core. You never die, you’re just knocked out. It’s keeping things big and bouncy and fun all the way through the process.”

The characters of the game really are larger than life and fun, but surely Len and Dev have favourites?

“The first character that really sparked for me was Topnotch. The guys had done this walk cycle for him and he had this silly sort of Monty Python walk that made me laugh out loud the first time I saw it. He’d be one of them. Blastbeard is great fun and Izell is a terrific character.” Len told me before passing the question onto Dev.

“It depends, if I’m playing Mega Rocket my man is Blastbeard all the way. Every one of them I have so much fun with, it’s so hard to choose.”

Back to the beginning

With Rocket Arena having a unique feel I was curious what the inspiration for the team was. The key things they considered during development. Dev tells me by taking it right back to the beginning.

“From the very beginning the core 3v3 mechanic has always been there. The idea is we want the game to be as fun to watch as it is to play and accessible. It’s big, bright and colourful but what Len brings is these subtle undertones that make it a little meatier for an older person. Len will have these really intricate relationships with the characters and how they relate to each other. The best part is we get to draw these story elements out over the course of the seasons.”

Len talks up the work the team and himself have done in helping to make sure there’s plenty of things for Rocket Arena for a long time.

“We have developed this terrific lore about this world. As time goes by you’ll learn more about it because we have this backlog of information. I come from the linear storytelling experience where I’d like to be able to see where these characters go and interact over time.

There’s so much more to come from Rocket Arena. The storytelling possibilities, to my mind, are endless. Coming from my discipline I’d like to see the TV series and lunchbox and all that sort of stuff and the other kinds of storytelling that are part of the video game experience. But that just depends on how many fans we can get watching and playing. I’m looking forward to more and I hope everyone else is too.”

I was curious to hear about the future roadmap and see what else they had planned outside of season 1. Maybe new characters or new maps?

Len was excited to talk about the voice actors and give a tease of an upcoming future character voiced by a voice acting veteran.

“We’ve got Kari Wahlgren as the voice of Flux. Jahto is voiced by James Arnold Taylor who’s the voice of Obi Wan in the animated Star Wars series. Kimberly Brooks, I worked with her years ago on Static Shock, she’s the voice of Mysteen.

Coming down the pike there’s a character we can’t name yet in public who’s voiced by Dee Bradley Baker, who you’ve heard on games and animation. He’s the guy who does the all weird alien voices on Ben 10. He does a voice for us and that’s all I can say.”

No matter how hard I tried they wouldn’t tell me any more.

Variety is the spice of life

One thing Rocket Arena does is offer a variety of game modes from the get go. With that there’s no doubt plenty of technical headaches and Dev gave me an insight into how the team works..

“It’s an ongoing process. You’re trying to pull it all together as you’re developing it. It’s like anything, it’s this ongoing thing. That’s actually one of the coolest things about a live service. For better or worse you launch with something and you get to improve it with player feedback.

We are really lucky to have one of the most incredible communities. It’s still early on and everything but the Discord group, the Reddit threads. We’re always listening. There’s always this listening to the feedback, trying to improve what’s there.”

What are you proudest of?

As our interview wrapped up I wanted to find out what they were most proud of with the game so far, early on in its life. Len was the first to talk.

“It’s absolutely gorgeous. As a newcomer to this medium and as a fan of artwork, to me, this is like feature quality animation. I’m thrilled that people get to see it. I’d like there to be a tourist mode where you can just walk around these environments because they’re so beautifully done and there’s such detail in everything. I’m biased but I also think that they’ve done brilliant work and I’m thrilled to be involved.”

The thing Dev is proudest of highlighted the team he works with. Final Strike Games is a relatively new team of 50 people making a completely new IP, which is a pretty intense thing to do for your first game. So what is he proudest of?

“The team we’ve put together and the game we’ve created together as a real collaborative team. It’s really accessible and easy to get into but what’s super cool is the characters are also unique, they play all differently and whilst they’re easy to pick up and play they’re really hard to master. It’s deceptively simple in that sense.

This is a brand new company. You’re putting together a new company, a new team and building an original IP. Shipping! That’s a big deal. I’m really proud of the game and I’m proud of the team for sure. It’s learning to work together, build the rules of this IP together and get it out the door on time. That’s a tall order, so I’m pretty proud of that. Then to watch Twitch streams and hear the players calling them by name, that’s a really, really fulfilling thing to hear.”

There’s clear enthusiasm about the game among the team and the a community that is still growing. It will be interesting to see if the game gets to put all of its ideas in motion. With frequent updates like it has already been delivering hopefully we get to see everything the developers had planned from the beginning. If you’d like to find out more about Rocket Arena make sure to head to the website for the game.