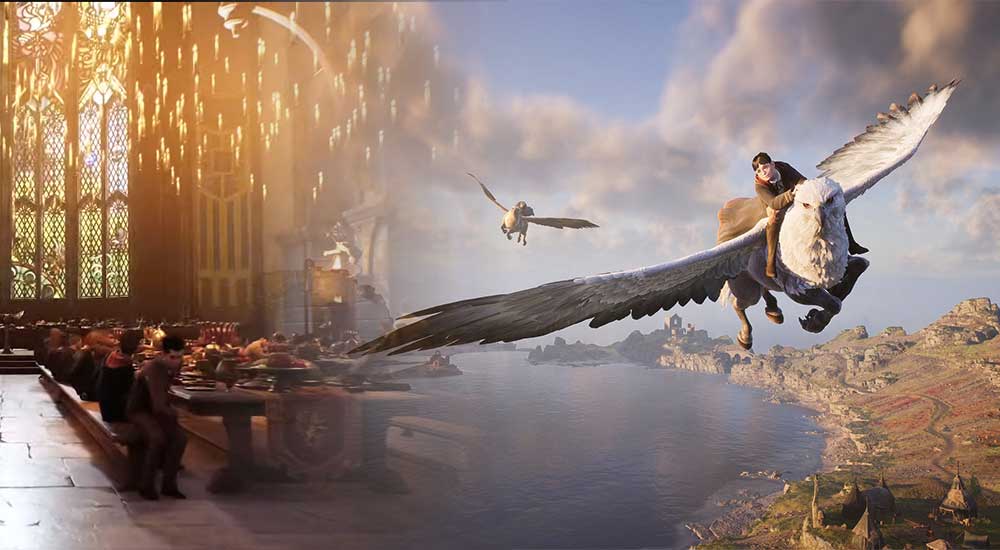 Once upon a time, the tale of the boy who lived was the story that gently laid an entire generation of wannabe wizards to sleep. A childhood classic full of the magic of love, acceptance and belonging. Swept up in a magical world that accepted you for who you are, what was once a source of comfort to so many has now become marred in controversy following author J.K. Rowling’s ‘gender critical’ opinion on our trans siblings.

It’s hard to miss the emotionally-charged ‘debate’ around the morals of Harry Potter and the so-called ‘trans panic’; there is no ethical consumption under capitalism, after all. But listen closely and you’ll hear the transphobic dog whistles masquerading as the cries of ‘valiant’ women fighting for their rights. Whilst this piece aims to answer the question ‘should I play Hogwarts Legacy?’, let me make one thing clear. Your trans brothers and sisters are not stealing the finite resource of human rights.

Trans rights are, and will always be, human rights.

What is Hogwarts Legacy?

Avalanche Studios shared more on Hogwarts Legacy at Sony’s State of Play event in early 2022. We saw 14 minutes of brand-new gameplay, packed with information about the game mechanics, story and release window. This is, by all accounts, a gorgeous looking RPG, set in the magical Wizarding World of Hogwarts.

But since the announcement trailer, some fans and critics of the franchise have been calling for a boycott of the game for the alleged anti-semitism, transphobia and racism woven into the fibres of the Harry Potter universe. The entire franchise has faced accusations of bigotry in recent years. Not only has J.K. Rowling faced criticism for using her platform to share her opinions on the trans community, but the  films have come under fire for a lack of diversity, and harmful naming conventions when an attempt at diversity is made.

J.K Rowling has made headlines numerous times over the past few years for raising her concerns of the transgender community on Twitter. Perhaps, as some claim, she’s been a defender of cisgender women’s rights, falsely believing that trans acceptance ‘erodes’ women’s rights and paves the way to erasing the concept of sex. It really began as she tweeted her defence of Maya Forstater in December, a tax specialist who lost her job after posting transphobic tweets. She then went on to justify her beliefs:

“If sex isn’t real, there’s no same-sex attraction. If sex isn’t real, the lived reality of women globally is erased. I know and love trans people, but erasing the concept of sex removes the ability of many to meaningfully discuss their lives. It isn’t hate to speak the truth,” she tweeted.

“The idea that women like me, who’ve been empathetic to trans people for decades, feeling kinship because they’re vulnerable in the same way as women—i.e., to male violence—‘hate’ trans people because they think sex is real and has lived consequences—is a nonsense.”

She continued, “I respect every trans person’s right to live any way that feels authentic and comfortable to them. I’d march with you if you were discriminated against on the basis of being trans. At the same time, my life has been shaped by being female. I do not believe it’s hateful to say so.”

Gender-based discrimination is a real and dangerous issue, Rowling is certainly correct here. You might even agree, that’s entirely valid. The issue comes from, as mentioned earlier, conflating the ideas that trans people’s lived experiences erase all forms of sexism. Two things can be equally true, and trans people pose no inherent threat to cisgender women’s rights. It’s disingenuous to state that she would ‘march with’ trans people when she stokes the flames of bigotry.

After receiving backlash to these tweets, J.K Rowling took off the mask. She created a blog post that detailed her concerns with so-called ‘trans activism’. I won’t link to it here, but if you do decide to find it for yourself, it’s out there.

Even if you’re a staunch supporter of trans rights, her eloquence and honey-dripped ‘concerns’ may lead to you nodding along and agreeing with some of her points. It’s this tonal whiplash that masquerades her transphobia as ‘just asking questions’  – in the same breath, she claims to support and love trans people, whilst also positioning them as a threat to you, or the women you love. Which is, of course, baseless.

These poisonous half-truths are mired by the underlying drone of plausible deniability; thorns designed to slip under the radar of mainstream audiences, but stab into the sides of those more educated on the nuances of gender identity. After the BBC applauded her ‘gender critical’ blog post and nominated it for the 2020 Russell award, claiming that offence is the “price of free speech”. When we normalise bigotry and discrimination, we open the floodgates to normalise extremist views.

Using her experiences of abuse and internalised misogyny to discredit trans people’s existence is, in my opinion, an incredibly insidious move. It’s an appeal to emotion on the most basic of levels and I, personally, find it hard to believe that J.K Rowling, a prestigious writer and intelligent woman, did not understand the audience she was appealing to with this blog post. She, of all people, knows the power that words can have.

So How Does This Impact Hogwarts Legacy?

Many of those who disagree with me will claim that you can separate the art from the artist. However, I find ‘death of the author’ to be a particularly disingenuous, and blinding take.

According to The Trevor Project, 78% of transgender and nonbinary youth reported being the subject of discrimination due to their gender identity. Furthermore, a recent Nielsen study shows that 10% of gamers over the age of 18 identify as LGBTQ+. 2,000 LGBTQ+ people over the age of 13 were surveyed – 40% identify as gay or lesbian, 50% identify as bisexual, and 10% identify as transgender or non-binary. We cannot continue to pull the wool over our eyes and separate the real world harm that Transphobia has real life consequences, and has no place in the games industry.

It’s clear that we need to do more to support transgender and nonbinary people, not invalidate their identities and cause further harm. If you’re on the fence about buying Hogwarts Legacy, may I suggest donating to a trans charity with the money you would spend and playing it some other way? Perhaps you could borrow from a friend, or buy it second-hand.

Talking of money, I’d like to address what some people will, no doubt be thinking right now. Many reports rightly claim that Rowling had nothing to do with the development of this game, which is correct. However, IP laws state that, as long as she owns the rights, she will profit off it via royalties from the game. When we line the pockets of J.K Rowling, we further normalise her beliefs and empower others to accept bigotry.

It can be easy, and comes from a place of privilege to simply ask: ‘does any of this… matter?’. Does any of this matter when J.K Rowling has made her millions? When Harry Potter is a household name?’ Isn’t it… too late to do anything? Well, it’s easy to take a defeatist view on the world. But if you’ve read Harry Potter, you’re sure to know that it’s never too late to change the world. Actions must have consequences, and money talks. If you disagree with her opinions, this is one of the best ways to show your support for the trans community.

‘Should I play Hogwarts Legacy?’. Phrase it this way: Does this game mean more to you than the trans people asking you to take a stand?

If you’ve got to the bottom of this opinion piece and disagree with me, thanks for taking the time to read it. It’s hard to have your opinions challenged, even more so when it’s negative towards something that you love, I get that. Let me know what you think in the comments, I’ll read all of them on the other side of your screen.