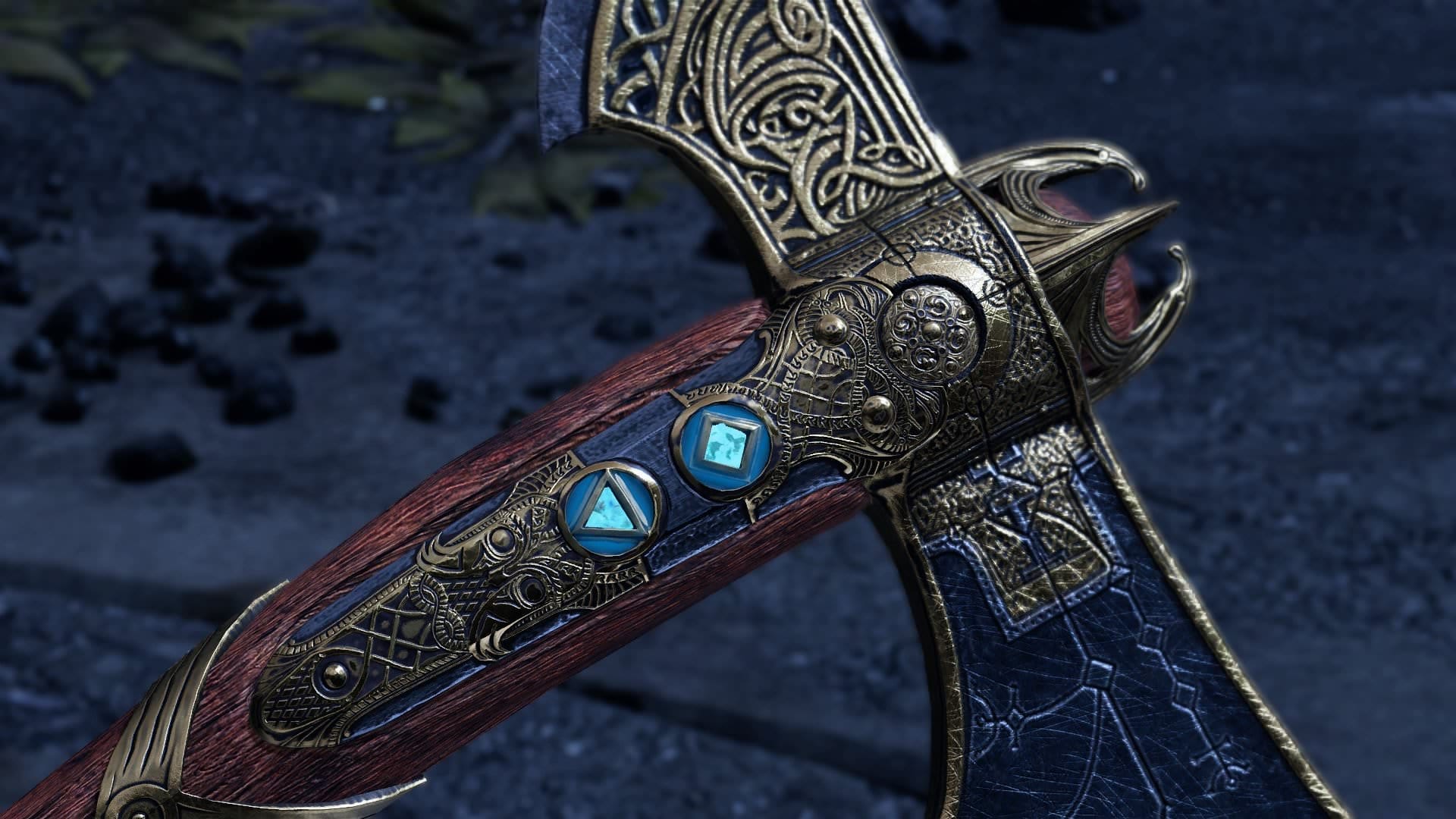 We’ve got something special to show you today. Two modders have built the God of War leviathan axe in Skyrim and you can download it as a mod for free today.

There are a number of other spectacular God of War Skyrim mods that we’ve pointed out in this article, but let’s first take a look at the Leviathan axe.
Check out this God of War Leviathan axe mod for Skyrim 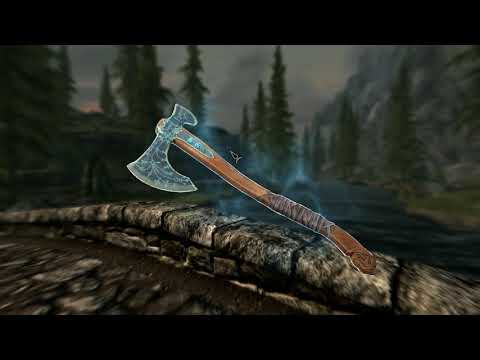 First things first, we have the actual axe model from modder Ghosu. This mod adds the Leviathan axe as an item that can be crafted at a forge. Ghosu actually built the 3D model for this axe from scratch. As you can see from the video above, it looks pretty close to the real thing.

If you add the mod, you’ll be able to create 4 different versions of the Leviathan axe. One is a one-handed version, another is a two-handed version. There is then an enchanted version of each that does frost damage. 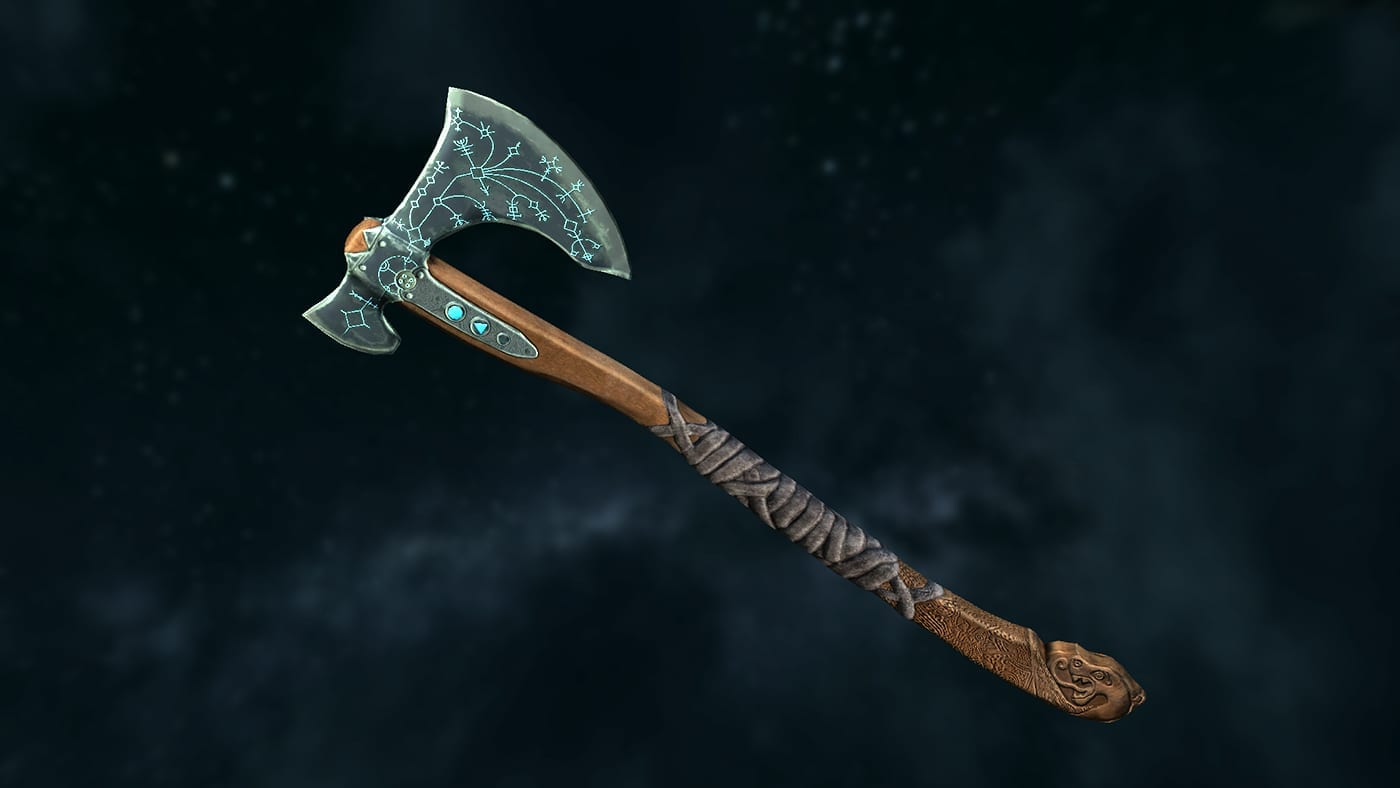 You will be able to find the Leviathan axe under iron items within the forge.

Unfortunately, the axe cannot be thrown and Ghosu doesn’t have any plans to add this feature to the mod. However, because the modding community for Skyrim is so expansive, we wouldn’t be surprised if somebody makes a mod where it is possible.

If you’d like to use this mod, you can download it here. Please note that this mod works for both Skyrim and Skyrim Special Edition on the PC.

If you download the mod and want to spawn the axe without crafting it, follow the steps below: 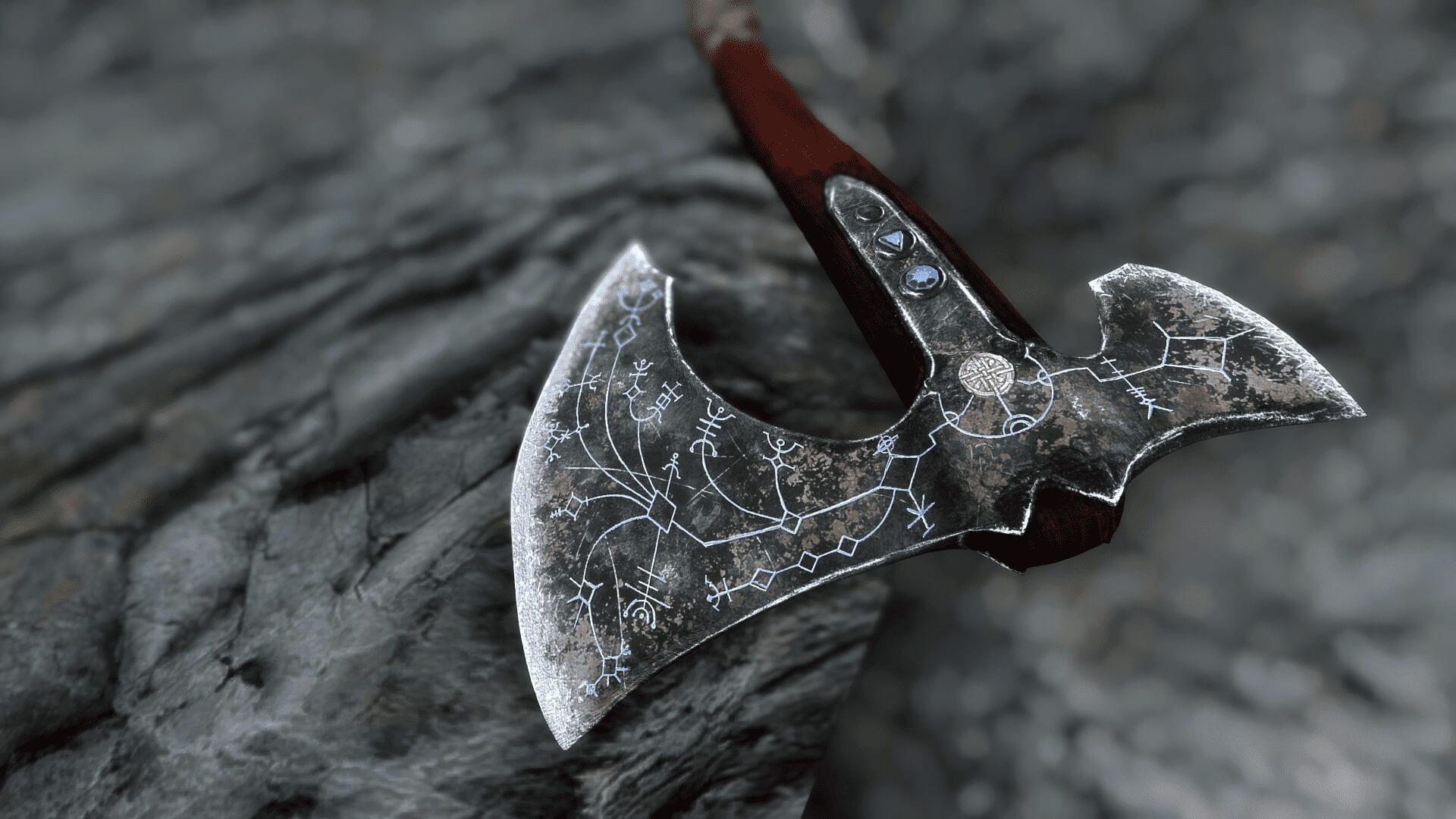 The God of War Leviathan axe model from Ghosu looks great on its own, but if you’d like higher definition decals, make sure to check out this next mod from Akarsil.

This mod was handpainted from scratch and includes far higher resolution graphics for the same Leviathan axe from Ghosu. 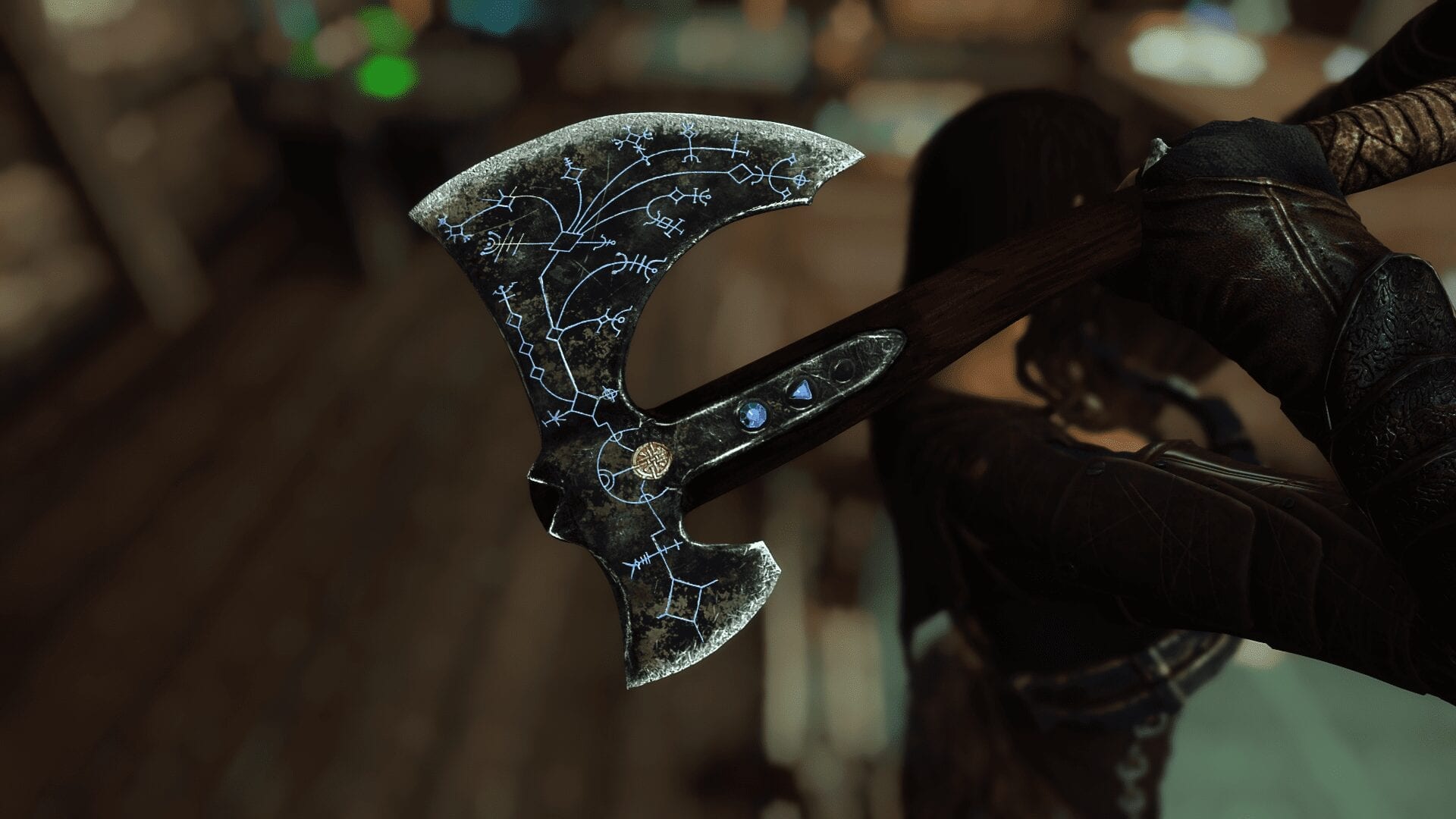 As you can see from the images above, this thing looks absolutely stunning in-game.

Akarsil used Photoshop CC, Substance Painted, NifSkope, and ShaderMap4 to hand paint and upload the graphical rework for this axe.

If you’d like to install this graphical rework, you can do so here. Keep in mind that you will still need the base mod from Ghosu for this to work. 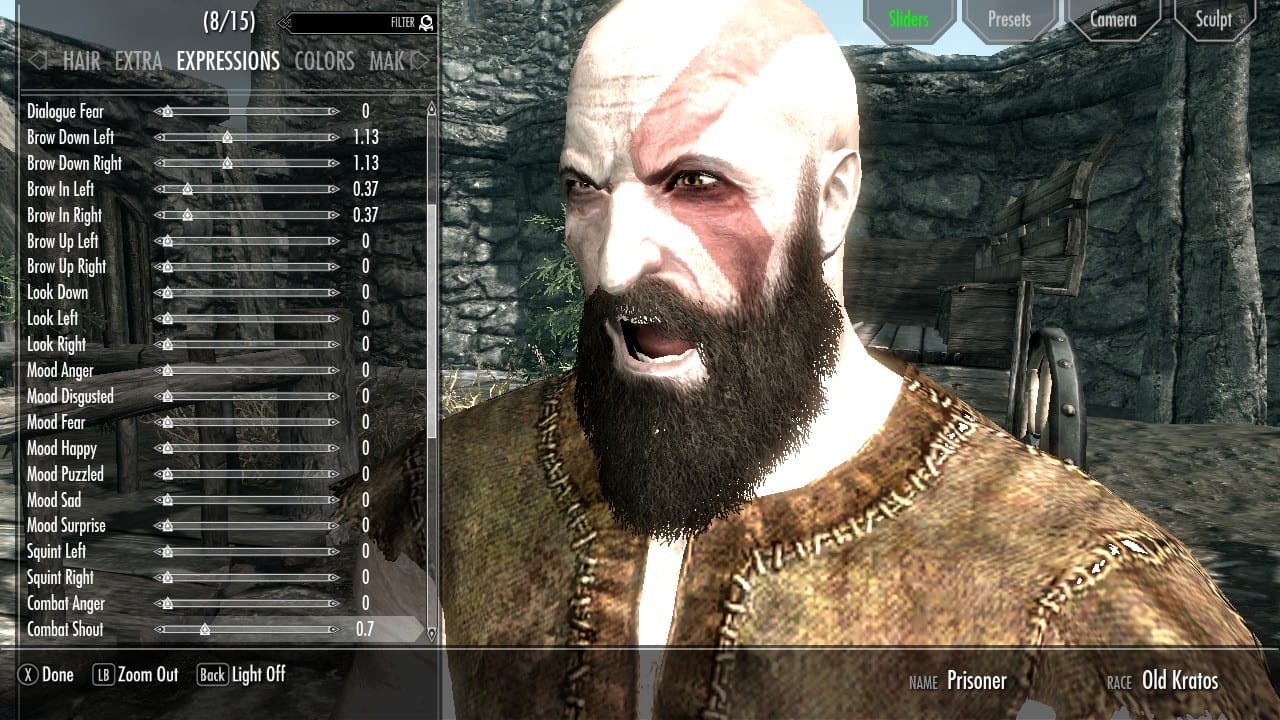 This next mod was created by SPinc recently and it adds the ability to choose Kratos as a starting character when you start a new game of Skyrim.

He’ll be available as one of the races to choose from during the opening scene. The mod has been designed to make you look as close to Kratos from the 2018 God of War game as possible.

I think it’s safe to say that SPinc did a good job at creating Kratos with this mod. If you want to take your modding game a step further and play as Kratos whilst wielding the Leviathan axe then this mod will take your interest.

Take a look at this mod here. 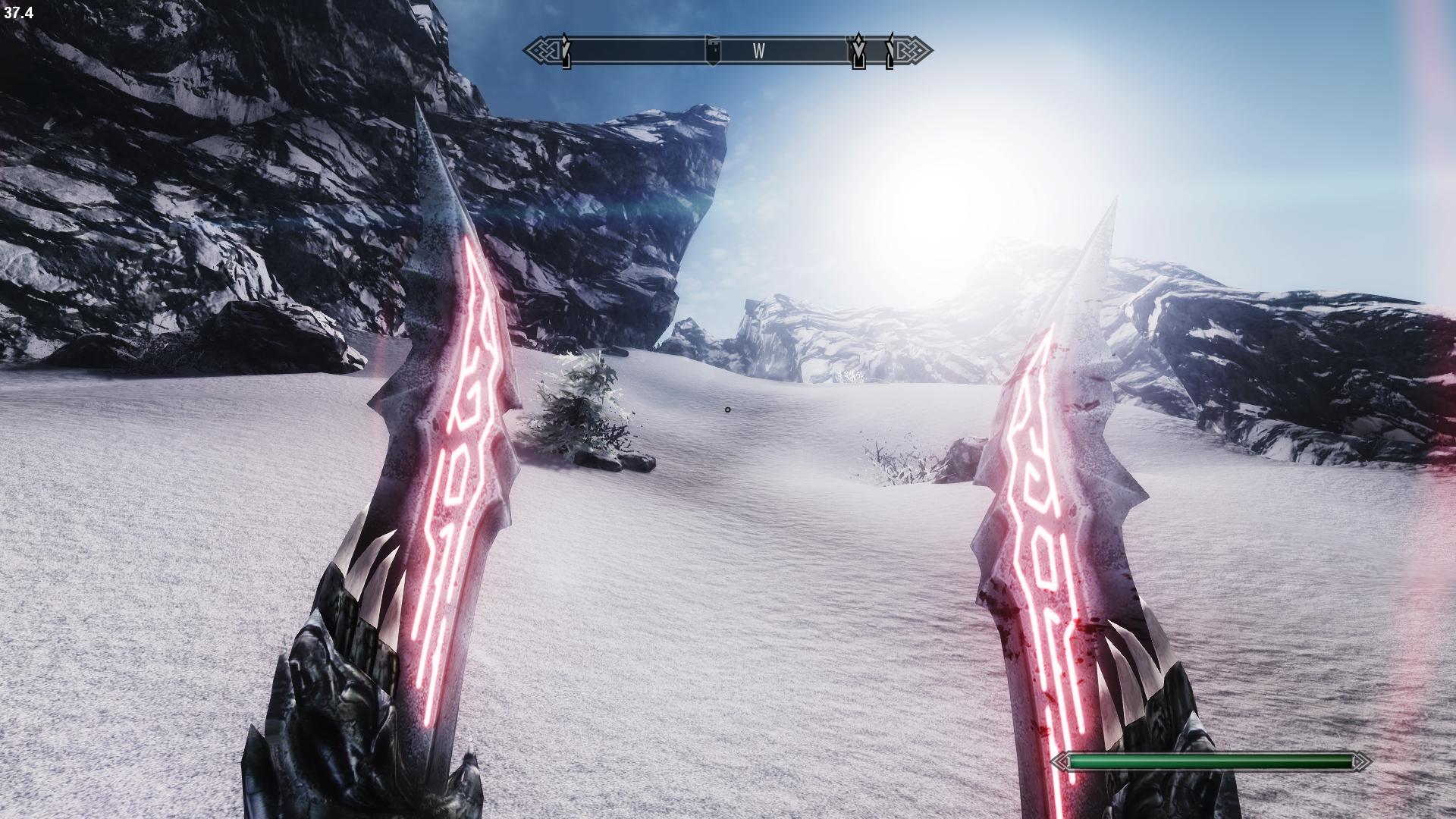 If you’re more of a fan of Kratos’ weapons in the original God of War trilogy, you’ll want to take a look at this mod created by volvaga0.

This mod was originally uploaded to Skyrim Nexus in 2012, but it still stands out as one of the best weapon mods today.

With this mod, you’ll add the Blades of Chaos and the Blades of Athena to Skyrim. These weapons are custom-made and look very similar to the same weapons in the original God of War.

By default, you will need to craft these weapons at a forge. You’ll be able to craft them with 1 Daedra heart, 2 fire salts, and one Spell Tome: Fire Rune.

With these ingredients, you’ll be able to create 2 of either the Blades of Chaos or the Blades of Athena. These are one-handed weapons meant for dual wielding. Take a look at the mod here. 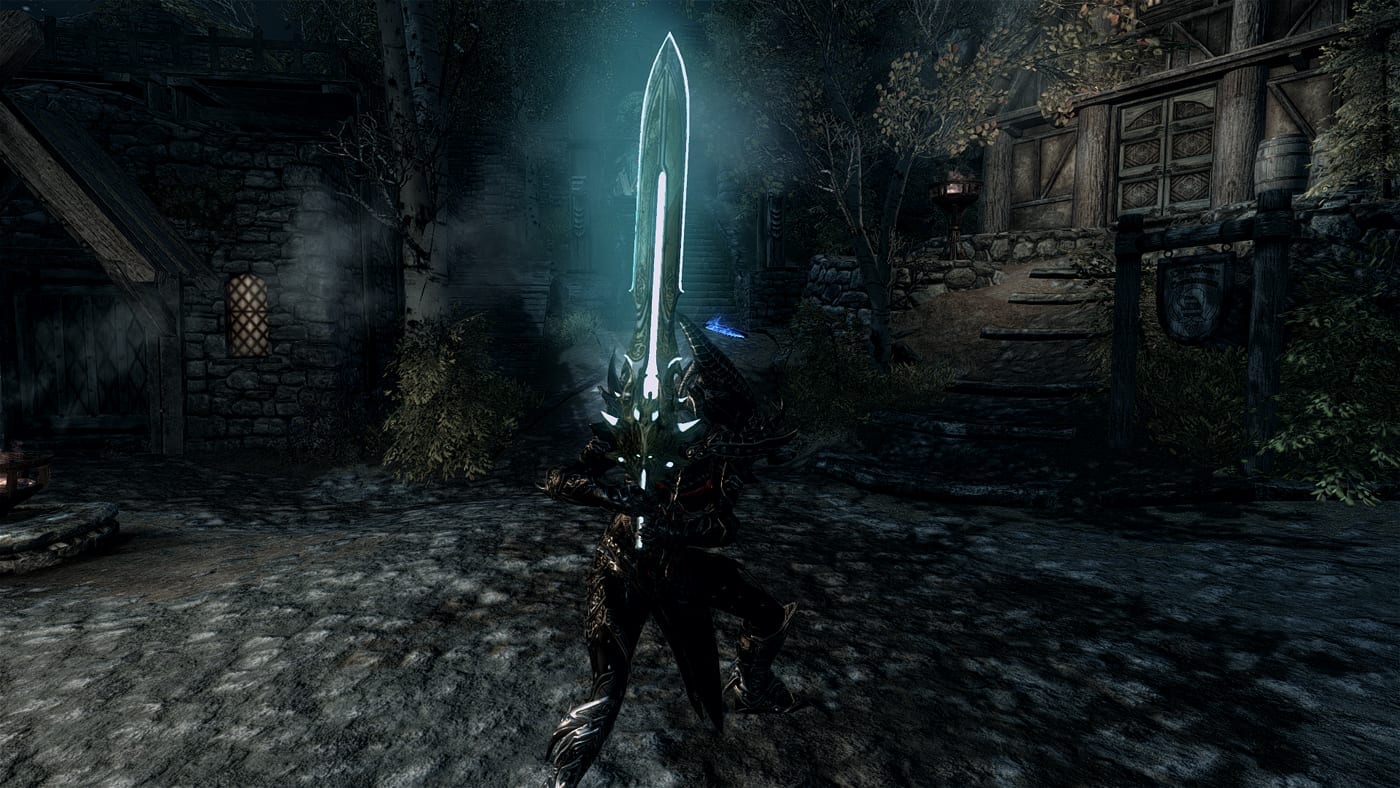 The Blade of Olympus is a weapon that appeared frequently in older God of War games. It’s far larger than the Blades of Athena and the Leviathan axe. It stands tall at almost 6 foot and has an unmistakable glint to it.

Volvaga0 also managed to make the Blade of Olympus in Skyrim and he has put it up for free to download in his mod collection.

The texture quality on this mod isn’t quite as high as any of the other weapons shown in this article, but thankfully the glow from the weapon manages to hide that.

When you download this mod, you’ll need to visit a forge. You can find the Blade of Olympus under the Daedric section and you’ll need a Daedra Heart, 3 Moonstone ingots, and 5 gold ingots to craft it.

If you know about God of War’s lore, then the shock damage makes perfect sense. The Blade of Olympus was created and used by Zeus during the great war.

There’s obviously only so far you can go with adding these mods to Skyrim. It’s nice to have these weapons at your disposal in Skyrim, but they’ll never quite compete with using the actual weapons in God of War.

Admittedly, the Skyrim combat system just feels incredibly outdated when compared to God of War. Hopefully, this is something that will be improved upon in Elder Scrolls VI.

Thank you for checking out these incredible mods. If you’d like to see more Skyrim mods, check out our top 10 Skyrim mod list.