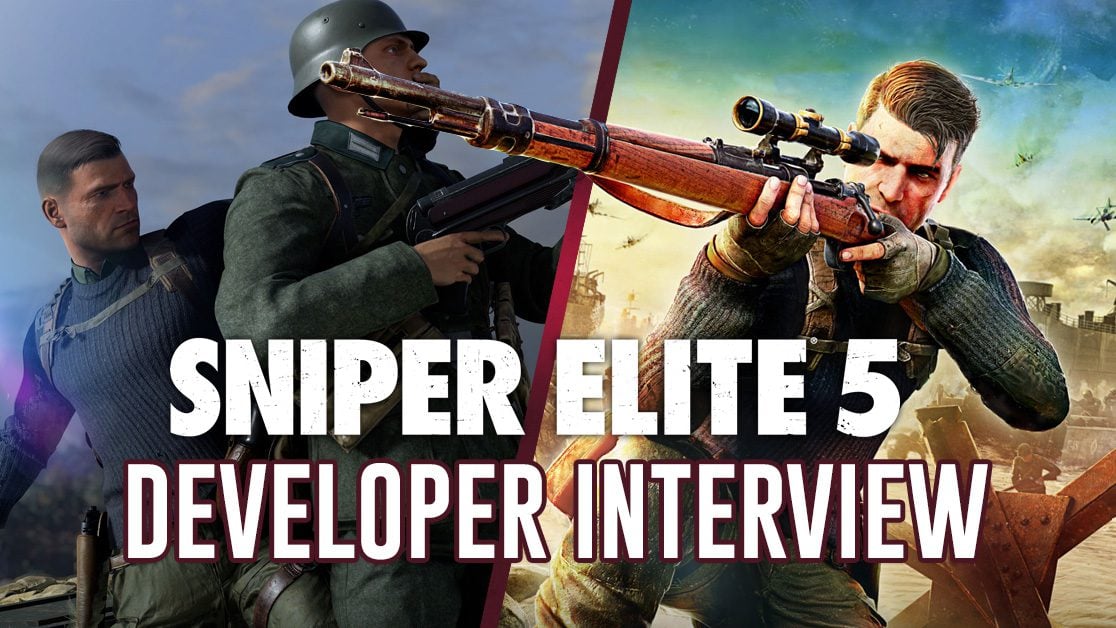 Sniper Elite 5 is the latest iteration of Rebellion’s flagship action series. Set in World War II, the player is taken across many iconic theatres of war as they use long and short-range combat to eliminate various individuals belonging to the Axis Powers.

We’ve played Sniper Elite 5 in its entirety, reviewing it earlier this week with an impressive 9/10 rating. In our review, we said: “Putting it under the scope, Rebellion Developments has delivered a coherent, open-ended stealth experience filled with plenty of freedom. This is peak Sniper Elite, with so much about the game inspiring tactical, sneaky gameplay that makes you feel like a real wartime marksman.”

But with such an impressive new game releasing in the midst of various worldwide issues; a war in Ukraine, a global pandemic, it’s important to talk to the people behind the art. GameByte spoke to Jordan Woodward, the Head of Design at Rebellion to learn more about Sniper Elite 5’s development and the way it has been influenced.

GameByte: What are the biggest changes that Sniper Elite 5 makes from the last entry?

Jordan Woodward: We have made a high number of improvements and enhancements, including the new Invasion Mode which is a real game changer. This is where players can invade each other’s campaign taking the role of an Axis sniper, tasked with taking the player out.

You get a message when your game has been invaded and it immediately ramps up the tension and creates a game of cat and mouse. Another human player acts in such unpredictable ways meaning it can be a real challenge. You can turn Invasion Mode off in the menu if you like but I recommend everyone try it as it’s a lot of fun.

Outside of Invasion mode one of the main areas for change has been our weapon customisation options. In Sniper Elite 5, if you factor in the different ammo types there are over 8 million weapon permutations available to the player. This enables them to create weapons that perfectly fit their playstyle and the part of the mission they are about to face.

You can customise your weapons between missions but also during missions by discovering workbenches that are hidden within the map – each level has 3 to find. These will also unlock new customisation options to enable you to further refine your selection.

We have also improved Karl’s ability to traverse the map. He is now able to climb vines to access hidden areas or open up new routes which may avoid guard posts. He can also make use of zip lines to quickly avoid oncoming danger.

The improved AI makes this especially important as they are far more aware than in previous games. If they spot you, they can inform other nearby soldiers, call for reinforcements or trigger an alarm. AI vehicles are also far more intelligent and can now cut across the terrain to hunt you down, rather than being stuck to predefined routes and paths.

GB: In your own opinion, what are the core ingredients to making a Sniper Elite game?

JW: The core gameplay can be summarised in three words: observe, plan, execute. That core is what differentiates Sniper Elite to a lot of other shooters. By its very nature the game is slower paced and considered as you know that any mistake you make could lead to disastrous consequences.

We want to offer the player choice and allow them to play the game in the way that best suits them. The maps are effectively big sandboxes for the players to explore and they can find a route through them that matches their play style. They can find a nice high spot and snipe from there, creep in the shadows slowly taking enemies out or go big and loud if they want. There is a lot to discover including side missions, kill list targets, collectables and more, which leads to great replayability.

Authenticity is also incredibly important to us and our community. This includes the weaponry, vehicles, uniforms, settings and general aesthetic. Sniper Elite 5 is set in France in 1944 around the events of D-Day. We wanted every location to scream France and undertook a number of research trips to ensure that we got as close to the look and feel of the real thing as possible.

We are also incredibly fortunate to work with some incredible experts and partners to help us ensure we are as historically accurate as we can be, whilst still ensuring that the game is fun to play.

GB: Sniper Elite 5 boasts “advanced gunplay physics” – can you elaborate on this?

JW: Of course. For Sniper Elite 5 when playing on the harder difficulty settings we now factor in rifle stock and barrel options along with gravity, wind and heart rate while you line up your shot.

We have also worked on the way that bullets deflect in the environment, including giving them the ability to ricochet off bone and cause even more damage to the enemy.

Iron sights have also been included for SMGs and pistols for the first time in the series and you’ll see your most precise shots played back in Kill Cam.

Click the next page to read the rest of our interview with Jordan Woodward!