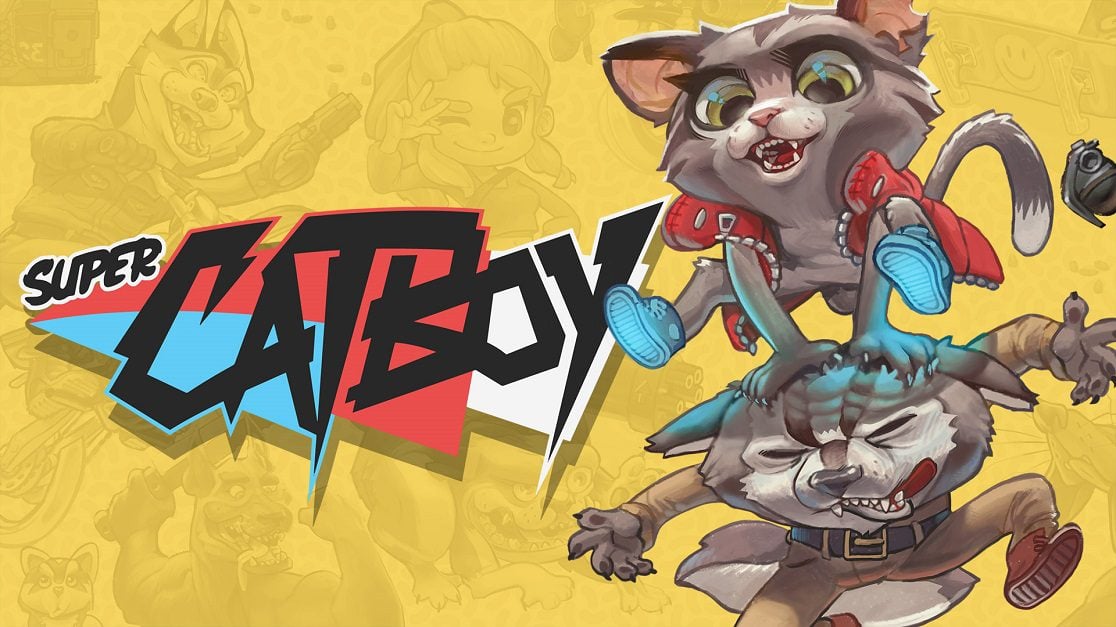 Missing the 90s Mega Drive attitude? Remember when Saved By The Bell was peak teenager TV? Super Catboy, an upcoming fast-paced 16-bit action platformer, does too.

Part of Digital Dragons 2022 indie showcase, Super Catboy stands out as a nostalgic love letter to the edgier (yet cheesy) side of SEGA’s early 90s push whilst putting their stamp on a saturated genre.

It’s not an easy challenge to pull off, especially for a two-man cat and dog development team:

Whilst Bilbo and Cody declined to comment, we managed to sit down with Arthur Eckmann and Thomas Flachs to find out exactly how Super Catboy will stand out in the Indie scene when it launches in Summer 2022.

We also managed to get an exclusive main character reveal too; let’s get straight into it:

GameByte: It’s no secret that Super Cat Boy is channelling that 90s Sonic debut attitude. However, we feel that you’re trying to tell people that games need solid gameplay and simple, fun gameplay mechanics. Are we right or wrong?

Arthur Eckmann: “We’ve grown up in the golden 16-bit platformer era of the 90s, which featured a lot of great platformers with solid gameplay that inspired us. Super Catboy is our love letter to that era, mixing game mechanics of different games of that time.“

Thomas Flaschs: “Catboy started as a more humanoid character with cat ears and whiskers but developed into being a cartoony cat on two legs later. I think what makes the general character design of the game stand out is that we have both human characters like Weapongirl or the villain Dr Ungefug and anthropomorphic animal characters.

“They all use realistic ballistic weapons, which is weird, looking at the art style that seems so innocent at first glance. We tried to give each character exaggerated characteristics depending on what kind of animal it represents. The dogs are all good boys and loyal to their master (also naive and dumb). The cats are a bit disinterested with grumpy facial expressions despite being very athletic and elegant in their behaviour.“

GB: What challenges have you faced when standing out from the crowd with Super Catboy? (By the way, we think you do!)

AE: “Thanks! We’ve never tried to actively stand out from the crowd. We are working on a game that we want to play ourselves and thus just focusing on bringing our dream to life.“

GB: Let’s talk about influences; these can be inside or out of gaming; how did the idea of Super Catboy come to life?

AE: “The idea for Super Catboy came to life more than 15 years ago, when I was still a teenager and daydreamed about what the perfect platformer would look like in my eyes. One of my favourite games of that time was Mega Man X.

“I wanted to incorporate the exciting dash, shoot and wall jump mechanics, round it up, and add some beat’em up mechanics into the mix that I enjoyed in games like Turtles in Time and Double Dragon.

“Back then, I was already making games as a hobby using tools like RPG Maker 2000 and GameMaker, resulting in some smaller games and prototypes, but I hadn’t the confidence to implement that idea yet. So I stored it somewhere in my head and worked on some smaller (learning) projects.

“Many years later, I’m in the lucky position to work full-time on this project.“

GB: The development team are full of 90s nostalgia, just like us. Tell us how that affected the level design of Super Catboy.

AE: “We’re indeed full of 90s nostalgia. But I’m not sure how much it affects the level design as I deliberately abstained from replaying the gems from the past. I want to create a game that can keep up with the nostalgic memories of those games I played as a child.

“In general, the level design process is an intuitive process in which I try to create a mix of platforming and combat-focused challenges. I build vertical slices and test them. Parts that turn out to be fun make it into the final game; others get thrown out.“

GB: Are there any plans to physically release Super Cat Boy in a retro-inspired SNES box or anything like that?

AE: “That’s something that we would love to do and have talked about in the past. But for now, we’re focusing on the digital release. Time will tell.“

GB: We believe you have something special and exclusive to show us?

AE: “We haven’t revealed the look of Super Catboys’ rival yet if I’m not mistaken. It’s time to introduce: Catgirl. (We are very creative with naming our characters!)

“She’s Dr Ungefugs’s bodyguard and responsible for the dirty work that must be done, like getting rid of Catboy and Weapongirl, who will become an inconvenience in his world domination plans.“

GB: Finally, what are you all playing right now? Are there any game releases you’re looking forward to this year?

AE: “Since we are in the final developing stage, there is sadly not much time to play other games. I’m also not fully aware which game releases will happen, but I have a big pile of shame of great games that I bought and haven’t played yet.“

“Among others, I’m looking forward to playing “Flynn: Son of Crimson”, a beautiful pixel art platformer I backed on Kickstarter and Cyberpunk 2077, which I saved for later when I have finally enough time to immerse myself into the game.

TF: “I’m playing Terranigma on the SNES again right now. And I’m meeting up with two friends every once in a while to play Secret of Mana 2 (3 player mod) on the SNES whenever we find the time.

“Since we don’t have as much time on our hands as we would like, we tend to be super disoriented in the game and always forget what we did last time. As a Harry Potter fan, I’m anticipating Hogwarts Legacy!“

Super Catboy is currently available to wishlist on Steam with a general release date of Summer 2022.