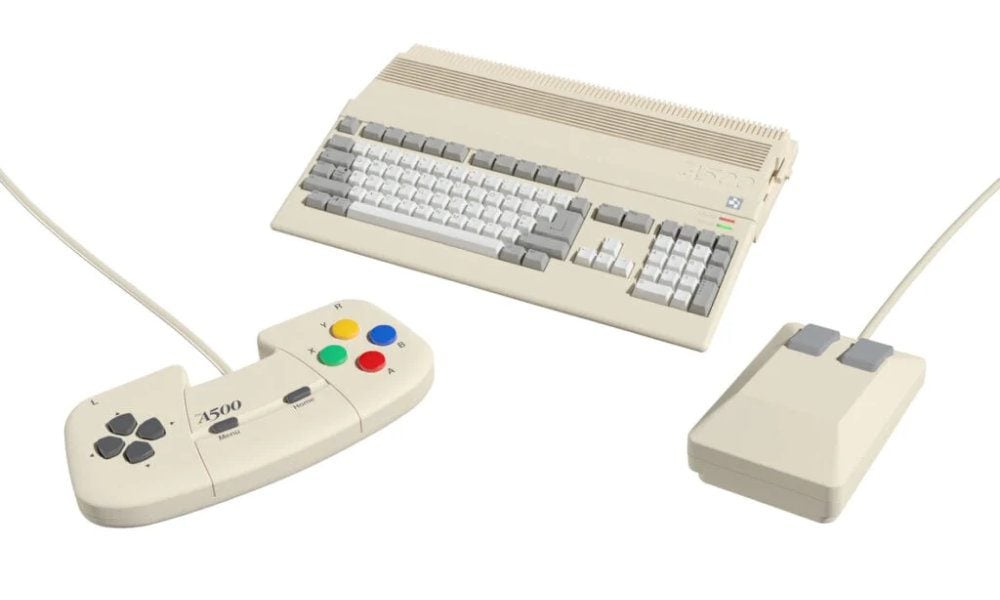 The next retro mini console is the Commodore Amiga 500 aka the A500 Mini. This news will be a joy to fans of retro gaming.

Firstly, let’s address the elephant in the room. I know I’ve described the Amiga 500 as a “retro mini console”. The original A500 was of course a PC. But despite coming with a “keyboard”, the A500 Mini’s keyboard is not functional. So, I guess technically, this can be called a “retro mini console.”

Anyway, let’s get on to the finer details at hand. The original Commodore Amiga 500 was released in 1987 and it remained very popular well into the early 90s. At the time it was seen as one of the premiere home PC systems and was perhaps not seen in most households. I can only remember one person from my childhood owning one.

However, the release of the upcoming A500 Mini gives gamers such as me a chance to finally own a piece of nostalgic gaming history. The A500 Mini is being developed by Retro Games Ltd, the company that previously released the C64 Mini.

What’s in the box?

The A500 mini will come with a “keyboard” which will essentially be a console hub. Though you can plug in a USB keyboard for compatible games. It will also come with an Amiga CD32 controller as well as an Amiga-style two-button mouse.

The Amiga 500 Mini will come with 25 built-in games. However, at the time of writing only 12 of the 25 games have been announced. The 12 games include:

Players will be able to import their own Amiga games

Yes, that’s right. Players will be able to import their own Amiga ROMS via a USB stick with full WHDLoad support. The A500 Mini emulates the A500s OCS chipset as well as an enhanced ECS chipset from the A500+, and the AGA (Advanced Graphics Architecture) of the A1200. This means that you will be able to play Amiga games from a variety of generations.

The A500 Mini will have a selectable 50Hz or 60Hz screen refresh, CRT filter, and various upscaling options, as well as a save game function.

When will the A500 Mini release?

Will you be picking up the Amiga 500 Mini? Let us know across our social media channels.