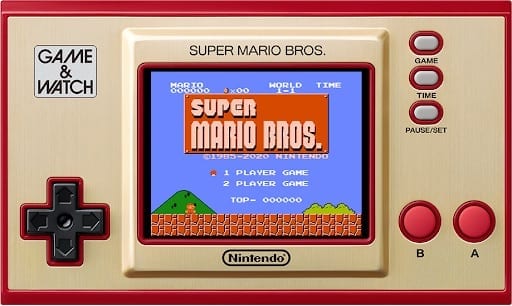 When Nintendo announced that it was bringing back the Game and Watch console, many gamers rejoiced. It was a chance for Nintendo to celebrate its humble beginnings as a handheld console maker, the very start of a series of events that would transform the Japanese company into a video gaming monolith. The Game and Watch series of handhelds spanned a number of years, first releasing in 1980 and stopping in 1991. For many, the Game and Watch is a classic piece of gaming history, one which brings back endless memories. Unfortunately in 2020 Nintendo decided to release a new Game and Watch, turning it into a mere collector’s piece, and one that directly chooses style over substance.

To some, the new Super Mario Bros Game and Watch will seem like a cute gesture, one that encompasses Nintendo’s past while celebrating its most significant asset. However, to others, this beautiful recreation lacks substance, failing to honour both Nintendo’s rich history and the character the device is attributed to. This Game and Watch comeback should have been the ultimate handheld tribute, but instead ended up being a massive missed opportunity.

Nintendo is no stranger when it comes to classic recreation. After all, we’re talking about the same company that pioneered the “classic edition” console. Even before Nintendo created its NES and SNES mini consoles, the company consistently offered players a way to explore the classics. Sure, Nintendo does have a bad habit of shelving beloved IPs, but for the most part, Nintendo is loud and proud about its legacy.

Before we get ahead of ourselves, we should probably look at exactly why the Super Mario Game and Watch console is such a disappointment.

On the outside, this retro recreation is gorgeous. It features detailed packaging, an authentic form factor, a vivid LCD screen and rechargeable batteries. As a product, the Super Mario Bros Game and Watch is oozing with quality. It gives meaning to the big seal of approval logo found on all Nintendo products.

Despite being a physical marvel, it’s when you power on this little time capsule that you learn the horrible truth. It’s almost empty. Since the console proudly takes the guise of a Game and Watch console, you’d perhaps expect it to be filled a wondrous library of Game and Watch games. Instead, you get just three. That’s it. One of the games is “Ball”, the first-ever Game and Watch game. The other two are Super Mario Bros and its sequel, The Lost Levels. Both of these can be played on almost every Nintendo console to date.

Besides playing all of three games, The Game and Watch can also be used as a watch. Despite this adding to its authenticity, it hardly feels like a system-selling feature.

The Game and Watch is a tremendously understated part of Nintendo’s resume. Not only did its success pave the way for the likes of the Game Boy and Nintendo Entertainment System, but it also facilitated the creation of the mighty D-Pad. The new Game and Watch neglects most of this by having a vacant library, even though so many Game and Watch games will be lost to history as a result.

Unlike less antiquated consoles, the original Game and Watch consoles didn’t use cartridges. Instead, each title was released as its own dedicated LCD game. Over its 11 year lifespan, Nintendo created 47 different Game and Watch’s, each pertaining to a specific design series. Ultimately, this means that playing Game and Watch games today comes with caveats, especially if you want to keep things authentic.

Luckily, Nintendo hasn’t wholly neglected preserving the Game and Watch. The Nintendo DS did receive a collection of Game and Watch ports in 2008, albeit as a Club Nintendo exclusive. Both this collection and the original LCD games will now come at a price. This means fewer players will be able to enjoy what the Game and Watch has to offer. The newly released Mario Game and Watch could have made these games more accessible as a tribute to the console’s importance and achievements.

It’s worth mentioning, however, that Game and Watch games are anything but elaborate. They are quite often simplistic, due to the limitations of early LCD screens. This could be why Nintendo emitted them from the new Game and Watch, but doesn’t entirely excuse the system’s overall lack of games. After all, since this is a console attributed to Mario, shouldn’t it have at least more than two Mario games included?

As you can imagine, it didn’t take long for hackers to get a hold of the Super Mario Game and Watch console. It wasn’t easy, but these same enthusiasts managed to get games like Super Mario World 3 and even DOOM running on the thing. This tells us that hardware limitations aren’t the reason the devices’ sparse library. So, why did Nintendo choose only to include three titles on this retro tribute?

While there’s an optimistic answer to the above question, there’s plenty of pessimistic alternatives. It could simply be that Nintendo didn’t want to spend time and effort on something it considered a novelty. Another explanation could be that Nintendo wanted to make the device as cheaply as possible, meaning less time was spent developing the product.

However, there’s a chance that Nintendo was simply testing the water with the Super Mario Game and Watch. After all, what the majority of Nintendo fans really want is some sort of Game Boy mini, right? Well, potentially.

Thanks to third-party alternatives and modding, most handheld enthusiasts already have access to a tremendous modern-day Game Boy experience to hand.  Essentially, if Nintendo wants to tap into the Game Boy’s modern-day market, it will have to provide fans with a flawless rendition of the console.

Nintendo’s potential hidden agenda aside, it’s sad to see such a beautiful product go to waste. The Super Mario Game and Watch could’ve been many things. Instead it was seemingly designed to be nothing more than an aesthetic collector’s piece. This isn’t inherently bad; after all, we all like nice things to sit on our shelves.

However, in this instance, Nintendo has managed to disregard a whole chunk of its own heritage, recreating a family heirloom whilst forgetting about its importance. Let’s hope that Nintendo will come to realise the importance of its first handheld in the future, and give it the historical context it deserves.

Do you think Nintendo missed a trick with the Super Mario Game and Watch?