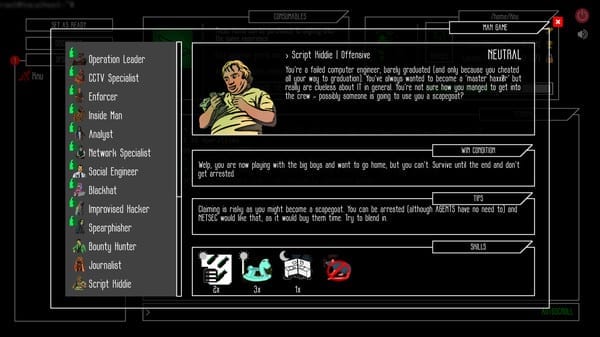 Let’s be honest duping and deceiving your friends is satisfying. While many of us wouldn’t dare to do it in real life, there’s a reason why games like Among Us are so popular. However, Untrusted is a game that takes the Among Us format and transforms it into a hacking simulator. The result? An experience that makes you feel like a treacherous technomancer.

Untrusted is a game with complex mechanics paired with a simple premise. The whole affair revolves around social deduction, with players assuming the role of either a “hacker” or an “undercover agent”. Here’s a quick run-through of the game’s rules, as listed on Untrusted’s Steam page:

“In Untrusted, hackers from the fictional NETSEC group are tasked in hacking a specific server on a computer network. NETSEC members must use their skills and wits to outsmart the undercover AGENTs that will try each night to perform arrests or have other players become snitches for them.

“The game ends as soon as the NETSEC group gains root access of the target node (meaning that they completed the hack opeartion) or when all AGENTs or NETSEC members have been eliminated from the game. If the NETSEC operation leader gives root access to an AGENT member however, it is also instant game over.”

As you’d perhaps expect, Untrusted has a role-playing element, which aids the game’s experience. However, the game’s Steam page also states that Untrusted is complicated.

Therefore, you might have to dedicate some time to familiarising yourself with mechanics before diving in.

Untrusted is currently free to play on Steam, so if you like Among Us, you should probably give it a go!