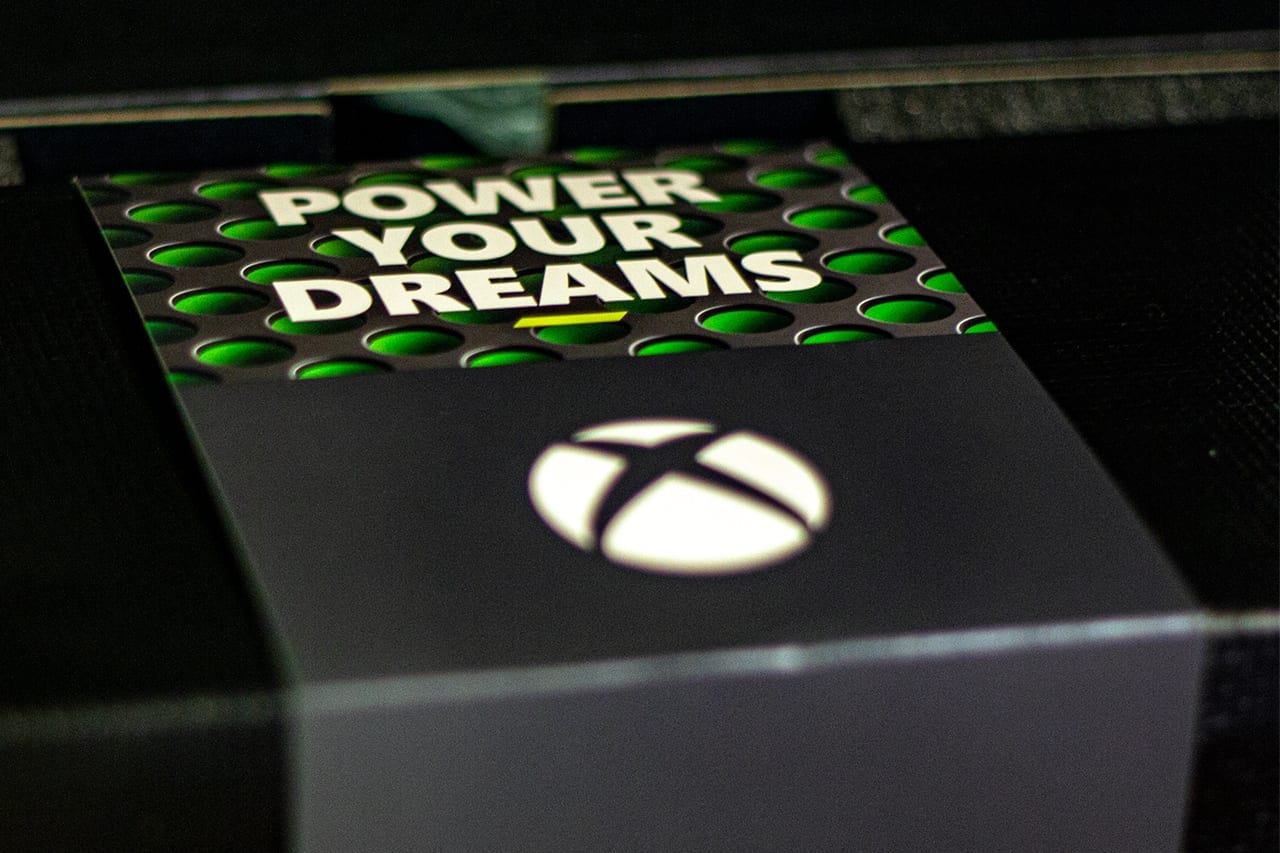 The Xbox Series X releases worldwide on November 10. We’ve already told you everything you need to know about it but now we’ve been hands-on with it we can take that further. We can tell you what we like about it, what we think needs improving and help you make the decision right for you on November 10.

Let’s break it down from the very beginning.

Technology can be boxed in many ways. These days though it’s important to make that experience as visually impressive as possible. Xbox does a great job of doing this with the Xbox Series X.

The stickers on the side of the box have easy to remove flaps which open it up with no tearing. Once inside you’re greeted with a very nicely packaged Xbox Series X with a cardboard sleeve around it.

The controller and all the accessories are in a small cardboard compartment and the box looks really neat. It’s a delight to open, easy to take out and fairly straightforward to put together.

Setting Up the Xbox Series X

The Xbox Series X doesn’t need much plugged into it to make it turn on. An HDMI and a power cable go into the back, plug them into where they need to go and you’re good to go… kind of.

Once you’ve plugged everything in you’ll also need to update/set up the console. Although this can be done using the console itself you can speed the process along using the Xbox app. If you don’t have it installed already I recommend getting it to download before you start setting up your console. It’s easy to navigate and helped make the setup much less tedious.

It’s a smart way to speed up the process for sure. Long gone are the days that consoles are ready to go straight from the box though so if you are buying this as a gift, consider setting it up beforehand.

The menu and user experience for the Xbox Series X is similar to other Xbox offerings. That is an important thing to stress here. Xbox is looking to champion that you can play your games anywhere. Whether that’s on your phone, your Xbox One, or your Series X.

If you’re already an Xbox owner or Game Pass user you probably know what to expect from the menus. They’re simple enough to navigate and there’s a nice level of customisation. I would like to see a bit more but I’m sure more will come soon.

The download experience is slightly painful, which will be a small concern for those looking to go more digital this generation. I couldn’t find any way to adjust my queue of downloads to prioritise games in the order I wanted them to download. A small problem, that is no way near a deal breaker but worth highlighting. After the initial set up you will probably not have to worry about it again. It will just mean some awkward stopping and starting downloads to get what you want straight away.

How Does it Look

The most interesting thing about its design is the top of it with the holes and the green accents. It’s eye-catching, it pops and it’s unlikely you’ll ever actually see it in most setups.

There’s a base for it if you stand it upright, which is clearly how Microsoft want you to display it. Turn it on its side though and… the base doesn’t move. So now you have a box on its side with a random circle on the end.

It’s a shame really because what the Xbox Series X does is fantastic. It’s just quite a dull bit of machinery to look at and even less attractive on its side.

I love what I’ve experienced of Quick Resume so far… when it works. Unfortunately, those three words are key here. Quick Resume just doesn’t seem quite there right now. It doesn’t work on every game and currently on some games where it says it does, it boots up from the start of the game.

It also has booted into one of the games I have access to with no sound. This is amended by quickly hitting the menu screen and going back in but it shows there’s still a few bugs in the system to work out.

It has been wonderful jumping from game to game on a whim of what I feel like at the time. If you’re someone that frequently changes their mind on what they want to play then the Series X is perfect for you. Especially if you invest in Game Pass and get access to the wealth of games on offer there.

I could jump from one game to another in about 10 seconds. When Quick Resume did work properly it even took me to the exact moment I left the game.

The controller is what you’d expect from Xbox for the most part. It fits well in the hand and has some very satisfying clicks when you press buttons. It takes two AA batteries, which are easy to fit in and for the most part is a great bit of kit.

The share button works well, it even pings things to your Xbox app if you have it set up to do so. The share settings seem a nice improvement for Xbox and should lead to some great moments being captured by gamers on the console. Having it in the centre of the controller, along with the other settings/pause buttons, means you don’t accidentally knock them. Plus they are far enough apart you shouldn’t accidentally hit the wrong one!

The triggers are very satisfying to press and the 8-directional D-pad is perfect for precision. That said the sticks themselves are perfect for accuracy. No matter what type of game I was playing I found that they were very responsive.

My one small complaint with the sticks is I would like them to be a bit bigger. Accessories will be able to sort that no doubt but they’re a touch too small for my thumbs. It would also be nice if the sticks had a little more resistance or weight to them. Sometimes it can feel a bit too light moving them around.

None of them made me think “this is next-gen” though.

Once I get my hands on some of the launch titles that I’ve not yet had access to I’m hoping that opinion changes. Some games have released this year that look beautiful and I can’t wait to see how the Xbox handles them. The fact that games work across One and Series is a great move for consumers.

As touched upon earlier it seems Xbox is stressing the idea of uniformity. The Xbox experience is far more than a console but, if you want it looking its absolute best for a reasonable sum of money, the Xbox Series X is going to be the best place for it.

We know Xbox has games coming. There’s so many on the horizon to be excited about and I can’t wait to see them running on an Xbox Series X.

At launch though Xbox Series X isn’t about next-gen games. It’s about making your current experience the best it can be. It’s also about…

Of the next-generation consoles, the Xbox Series X and S are the only ones that can give backwards compatibility that stretches over a decade. There are games on Game Pass and the store you can buy and you can even put your discs in.

When I put in my Xbox 360 games it simply asked to install an update to make them work. They worked and looked superb. It’s a wonderful feather in the hat for Xbox to have with their consoles. For those, like me, that skipped Xbox last generation it’s great to have a way to play your 360 collections and catch up on what you missed last-gen.

It has been alluded to but Game Pass remains a great investment for gamers that want variety in their gaming. If you’re coming into gaming for the first time or you’re picking up your first Xbox in a while then Game Pass should be on your radar.

It’s a genuinely decent offering they have and it’s nice to see some games with optimisations for Series X on there too.

The Xbox Series X is a great bit of kit. In some ways, it does what a PC can do but its exploration into things like Quick Resume help set it apart. Being able to have so many games running at once that can be easily jumped into and resume where you left off is not something every PC can do.

The fact that the Xbox Series X runs quietly when doing this and seems to deliver it with no performance slowdown makes it even more impressive.

The Xbox Series X is a powerhouse. It may not look the most flashy and there are still some little things to fix but there’s no denying its quality. At the moment it’s lacking games but Microsoft has made their intent clear there with their studio purchases.

If you get the Xbox Series X you’ll get the console that will be getting the new Bethesda games, the new Halo and so much more. Not only that but you’ll get a console that can handle them quietly, quickly and competently.

The Xbox Series X may not be much to look at but it’s definitely packing.

The Xbox Series X reviewed here was provided to us by Microsoft.