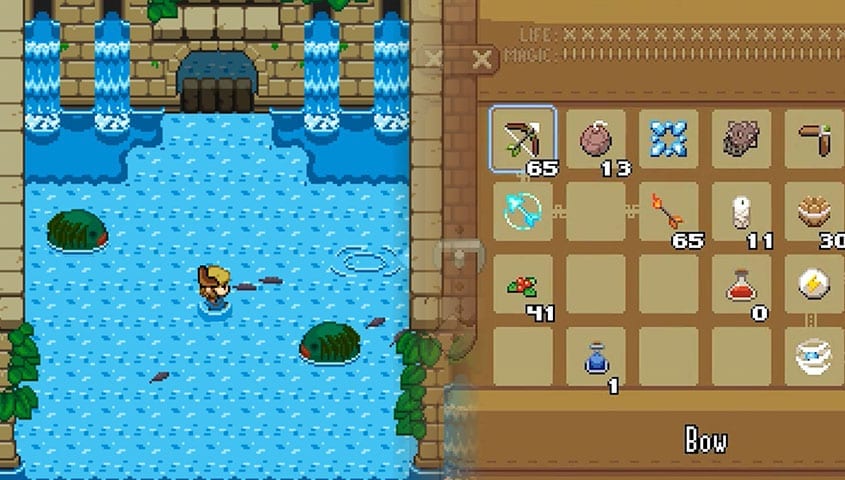 Earlier this year the world was introduced to the wonderful Yarntown, a itchi.io game which reimagined FromSoftware’s Bloodborne as a 2D retro treat. Created by developer Max Mraz, fans of the short title were eager to hear about the next game – and here it is! Max Mraz and publisher Nordcurrent have officially revealed Ocean’s Heart, a Legend of Zelda-inspired 2D adventure coming to Steam in early 2021.

Looking like a cross between Link’s Awakening and A Link to The Past, Ocean’s Heart promises a fully-realised action RPG set in a world “teeming with secrets and mysteries.” The top-down classic art style is definitely looking special from what we’ve seen so far, and if you’re a fan of SNES games then this might be one to keep on your radar!

The game’s official description reads as follows: “Ocean’s Heart is an epic top-down action RPG in which you explore a beautiful archipelago as a young woman named Tilia. Take on contracts to fight monsters, descend deep into ancient dungeons, defeat menacing foes, and unravel the mystery of Ocean’s Heart. All done in beautiful, bright pixel art.”

Ocean’s Heart will see you craft potions, upgrade weapons, battle monsters and explore the world around you as you fulfil your epic quest.

“Battle fearsome monsters and wield various weapons and ancient magic to defeat or outmanoeuvre them,” says the game page. “Search for special materials to upgrade your weapons until you’re demolishing monsters who once put up a fierce fight.”

Check out the Legend of Zelda-inspired 2D adventure in action via the tweet below!

The game is currently targeting a release window of early 2021. Add it to your wishlist right now, or find out more details on the Steam page just here. You can support Max Mraz on Twitter here.