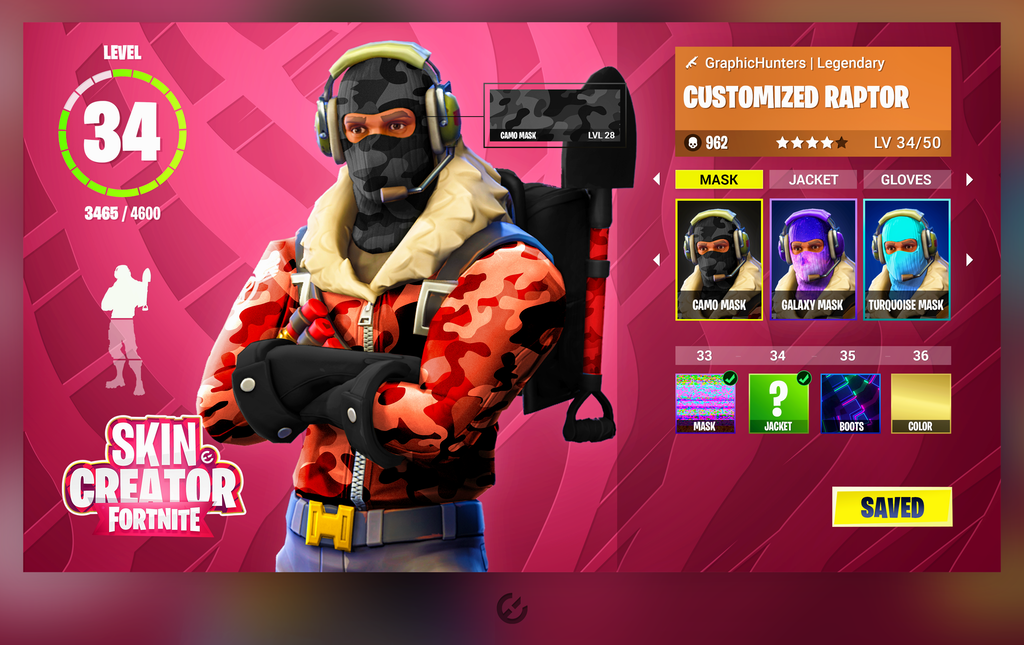 There’s no denying that there’s a lot of love for Fortnite skins right now. Despite the huge collection of skins already in the game, some fans are getting pretty creative with some Fortnite skin concepts.

I’ve taken a look at some of the best and wanted to share them all here. Without further ado, here’s a look at the top 10 Fortnite skins concepts that I absolutely want to see in the game as soon as possible. 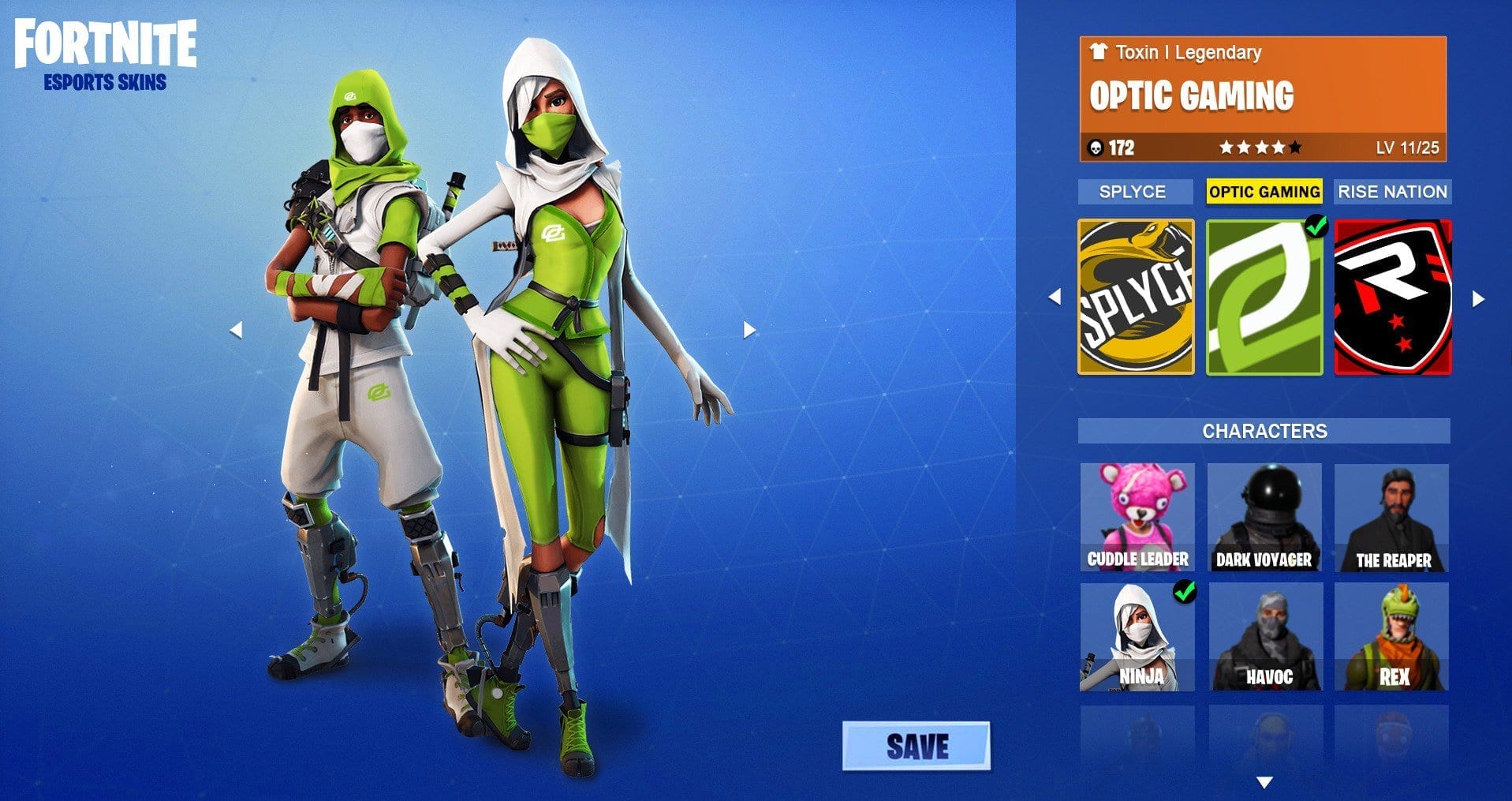 This first skin concept was created by @T0XlN on Twitter. Rise thought it would be interesting to see what it’d look like to take some of the most popular esports organizations in the world and create custom skins for each organization.

If you’ve seen how Overwatch have esports skins, then you could probably see how they’d sell well in Fortnite as well. The only difficult part is having an esports scene for Fortnite in the first place. So far, there hasn’t been any talk or progress towards introducing a competitive scene to Fortnite.

I kind of want there to be an esports scene for Fortnite just so that we can get these skins. 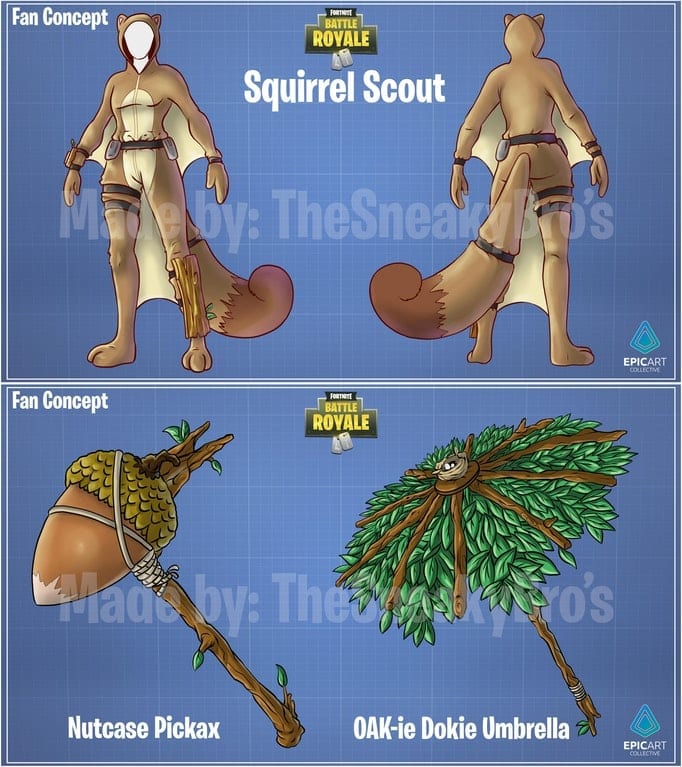 This next skin concept doesn’t just include the skin, it includes the glider and the pickaxe as well. This an entire package that I’d love to see in Fortnite in the future.

This skin is based on a flying squirrel and it was created by SneakyParagon.

Have Epic games ever added a skin concept from a player?

In short, no but there has definitely been times when the community have inspired ideas for the game.

There are a couple things to note about this skin. Firstly, the main costume is almost like a onesie. The pickaxe is essentially a giant nut on a stick, and the glider is an oak stick with an umbrella built from leaves at the top. 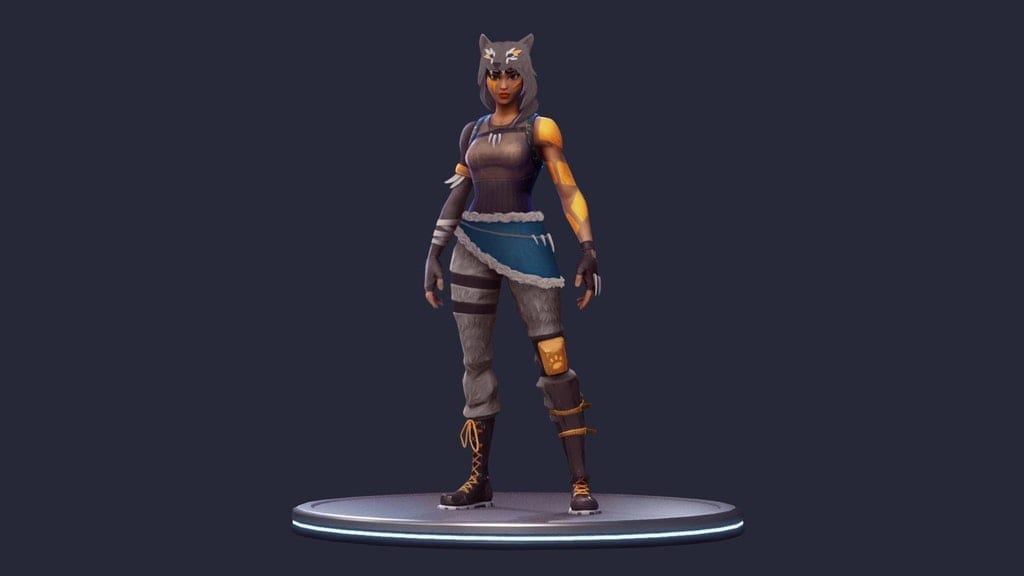 This next skin concept was shared by Kraze136 and if it made it into the game we bet Dakotaz would rep it every single game. I’d definitely use it, too.

What’s great about this skin is that it’s pretty simple, but it does enough to stand out from the other skins in Fortnite. Hopefully, this would be a common skin so that it doesn’t cost an arm and a leg in V-Bucks. 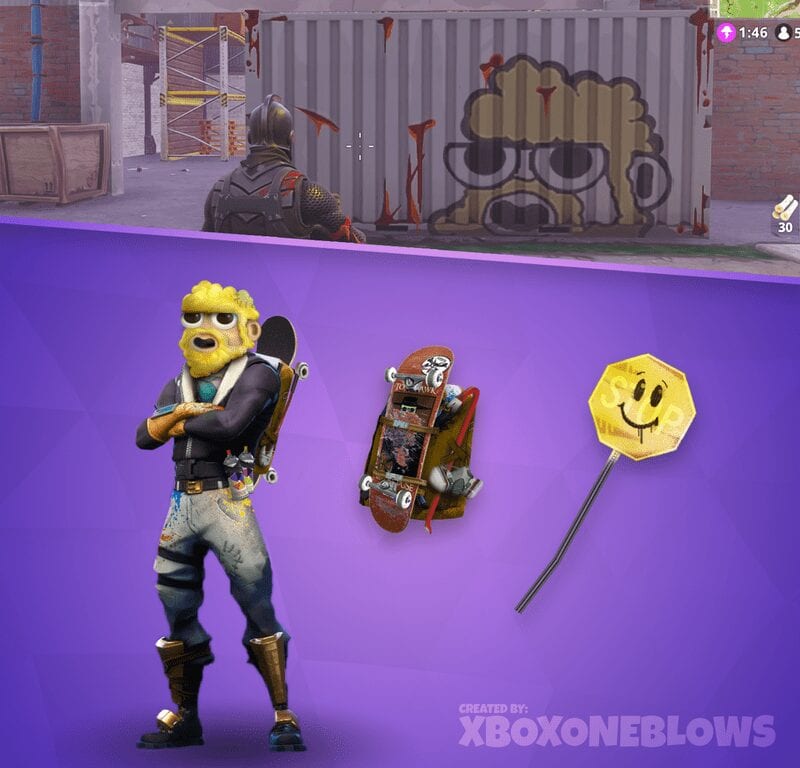 Have you ever noticed that Fortnite seems to be filled with various graffiti? There are plenty of shipping containers that have been tagged, some of which show off this strange blonde bearded man.

Nobody knows the origin story for this graffiti, but somebody was inspired to create a Fortnite skin concept based off of it. You can see the graffiti head skin concept above.

The skin was created by XboxOneBlows and everything about it is awesome. I love the way the character has jeans with paint splats on and a skateboard on the back of his backpack. The pickaxe is nice, too. It’s simple but it’d definitely go down as a popular item. 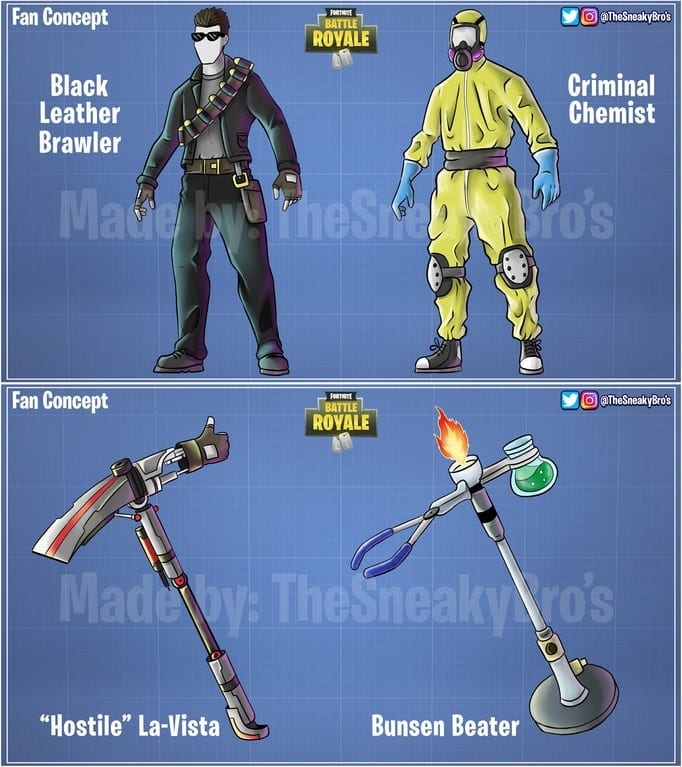 Next up we have more Fortnite skin concepts from SneakyParagon. This time, we have designs based on pop culture characters.

On the left, we have what SneakyParagon has named the Black Leather Brawler. On the right, we have the Criminal Chemist, which is quite clearly inspired by Breaking Bad.

The designs on both of the pickaxes are a nice addition to the overall skin concept as well. 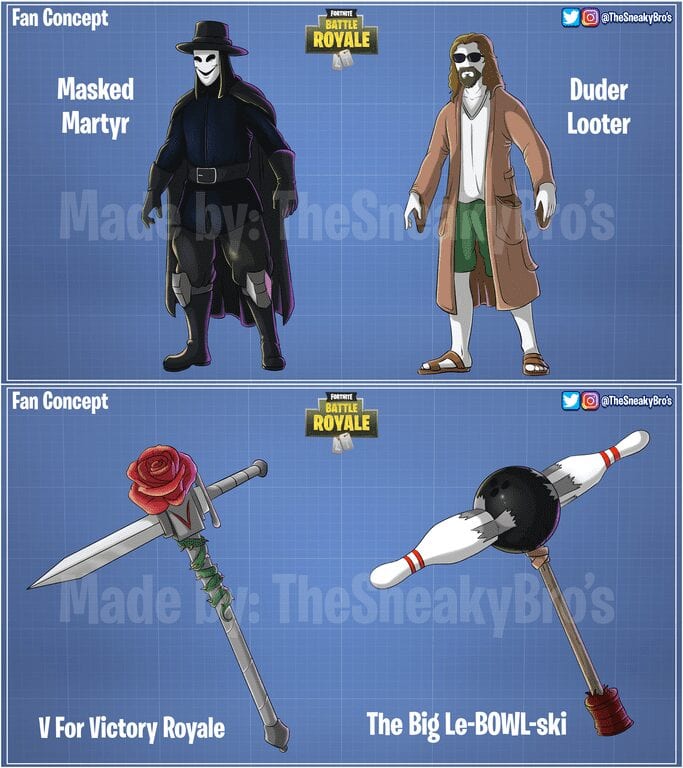 Okay, we’re back at it again with two more pop culture skins from none other than SneakyParagon again. I personally think these two skins are even more awesome than the first two.

The V for Victory Royale pickaxe design is also very neat. The Big Le-BOWL-Ski is a good alternative for those that like to go for the less serious skin designs. 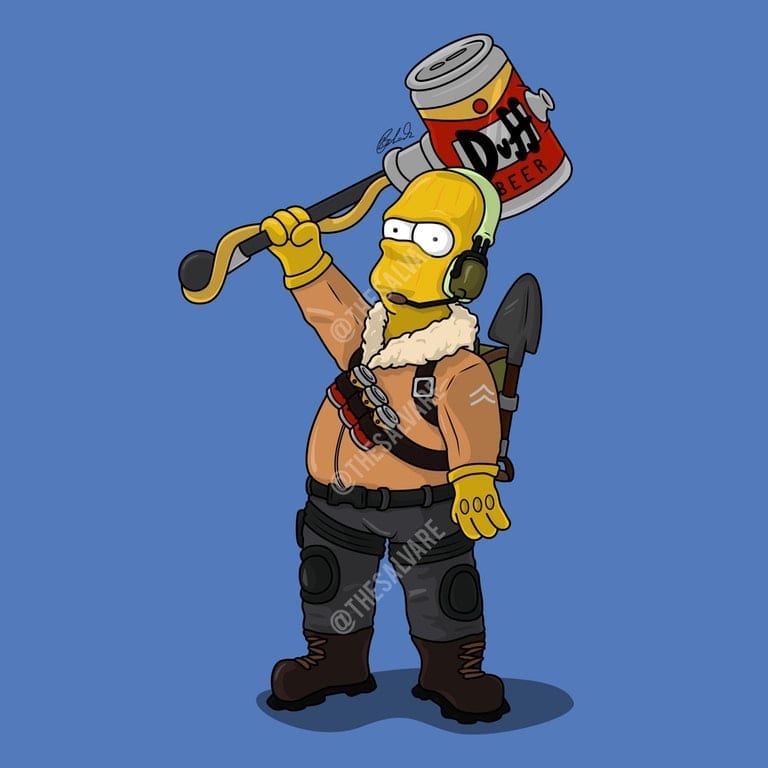 It would be hard to get this approved by Epic, but I’d still love to see this Homer Simpson crossover skin in Fortnite. Or perhaps we’ll get lucky enough to see the Simpsons reference Fortnite in some way in a future episode.

This skin was made by Thesalvare and it merges both the Fortnite Raptor skin and Homer Simpson to create a crossover concept.

What is the best Fortnite skin?

Almost certainly this one.

The skin is mostly the same, although the pickaxe has been replaced with a giant duff beer keg on a metal stick. I’d love to see more crossover Fortnite skin concepts like this for other characters. Has anybody seen anything similar to this online?

Let’s end this with a bang, shall we? Instead of waiting for Epic to add skins into the game, why not let us get access to a unique Fortnite Skin creator? This is exactly what graphichunters has proposed.

With this system, you’ll be able to make custom skins and add your very own cosmetic items, colors, and patterns. Players could earn new customization options by leveling up and progressing through the battle pass.

In the picture shown above, nearly everything can be customized and each option is unlocked after reaching certain levels.

As an example, the mask has been painted with the camo mask pattern. There’s potentially no limit to what you could make your character look like with this system and it would allow everybody to have their very own unique appearance.

I’d personally prefer to see this system added to the game in place of any other Fortnite skin concepts shown so far.