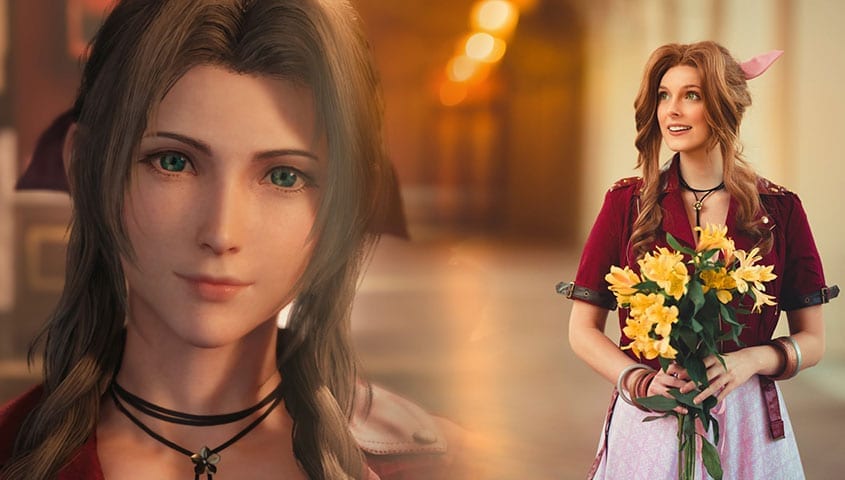 Whatever your Halloween costume plans this year, you might want to cancel them as ‘Ween 2020 has already been won by actor Briana White for her cosplay of Final Fantasy 7 wonder, Aerith.

White, who voiced our beloved angel Aerith in this year’s Final Fantasy 7 Remake, has donned the garb inspired by the character to create an incredible look that fans just can’t get enough of.

Taking to social media to share the incredible cosplay (though at Halloween, is it more costume than cosplay?), White had the following to say: “Beyond excited to share these first 2 photos of my Aerith cosplay. How lucky am I to voice her? Photographed by @MartinWongPhoto, styled by @helloiamkate, dress & hair ribbon made by @LadyxZero. More pics to come!”

As you can see in the images below, White absolutely nailed the look, bringing to life Aerith’s sweet, charming nature along with everything else we love about the character. Now let’s hope we’ll get to see her cosplaying as Aerith as she plays the game on Twitch!

Final Fantasy 7 Remake fans across the world can’t get enough of the Aerith actor’s cosplay, with the tweet being flooded with praise from gamers everywhere.

Even Square Enix, the publisher behind Final Fantasy 7, reacted to the actor’s cosplay of Aerith with a series of heart emojis.

Speaking of Final Fantasy, it’s still a little crazy to know that the next game in the series, FF16 is really happening.

Revealed by Sony during one of the company’s State of Play events, the PlayStation console exclusive already looks incredible.

The official video description reads: ““The legacy of the crystals has shaped our history for long enough…” Watch the exciting teaser trailer for the newest title in the legendary FINAL FANTASY series. FINAL FANTASY XVI is the next all-new standalone single player action RPG from Square Enix, coming to PlayStation 5.”

There’s no release window as of yet.

What do you think of the Aerith cosplay? Let us know with our React buttons below!