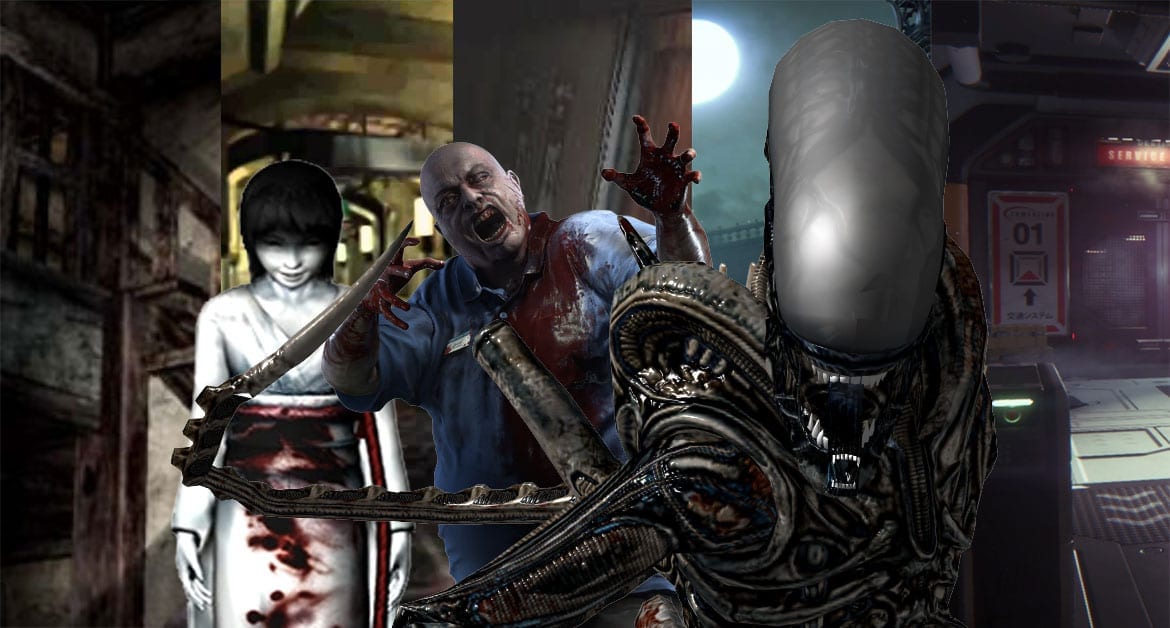 A great horror game can be made up of a fantastic story, characters, gameplay, music, and enemies. All of these components work together to great a truly memorable experience, or perhaps one of these elements shines brighter than the rest to make a game unforgettable. However, there’s one other important factor that makes for a great horror game – the locations.

In many respects, regardless of whatever the video game may be, specific locations and their moments can leave a lasting impression more than anything else. At times a great location can often be seen as its own character, with its own personality and charm.

I’ve tried to dwindle down some of my favourite locations in horror games. I’ve also kept it to one location per franchise, just to be fair. So with that said, here are my personal favourite terrifying locations in gaming.

For Silent Hill fans, the first terrifying location we experience in this iconic survival horror series is Midwich Elementary School. An elementary school is supposed to be a safe haven, a place where young children can begin to shape the path in which their lives will take. Much like the entire town of Silent Hill, this Elementary School is a place shrouded in a cult-like religion.

When Harry Mason wanders into this school in search of his daughter Cheryl, he also encounters a living nightmare known as the Other World. In the Other World, with the sound of that siren, the Elementary School becomes dark, rusty, and filled with evil entities. The knife-wielding Demon Children soon become the last of Harry’s worries.

While this school isn’t the most dangerous location in the Silent Hill universe, for many of us it served as our introduction into the world of the occult and the sinister secrets that would forever plague this horrific town and its residents. Is it a place we’d like to be trapped in real life? Heck no!

As a big fan of the Resident Evil series, I could have easily written an article dedicated to my favourite locations in the franchie. I could have picked the Spencer Mansion, the Clock Tower, Rockfort Island, the Village from RE4, even Raccoon City itself. However, after much deliberation, I chose the Raccoon Police Department.

When you first enter the RPD in the original Resident Evil 2, the camera pans up, you hear the eerie music and you’re in awe. What used to be an oddly constructed museum-turned-police station is filled with secrets, some too sinister to share. Yet you want to explore to see what lurks behind the next door, even though it could result in being bitten by a zombie or worse, beheaded by a Licker!

Much like Midwich Elementary School, a police station is supposed to be a place of safety, only adding to the fear. The terror was intensified in the 2019 remake thanks to Capcom’s detailed RE Engine. New rooms are added, enemy locations remixed, zombies can now open doors, and oh yeah, you’re also being stalked by the relentless Mr. X! Regardless of whether you play RE2 from 1998 or 2019, the RPD will always be one of the eeriest yet enduring locations etched in survival horror history.

If there was ever a location just as scary as the monster that wanted to kill you with its second face, it’s the Sevastopol Station from Alien: Isolation. For me personally, the Xenomorph is one of the most terrifying creatures in cinematic history, and while this alien was implemented so perfectly in The Creative Assembly’s inner space survival horror, the Sevastopol Station was the icing on the cake.

Putting the oversized Xenomorph to one side, the Sevastopol Station is kinda like a giant ghost ship lost in space.  Creaks, clanks, faint hisses in the distance, maze-like claustrophobic corridors (and the odd open room that will give you a sudden feeling of agoraphobia) all work together to create one terrifying experience. Blind corners where anyone or anything can attack you at a moment’s notice also keep you on your toes. The Sevastopol could turn the sturdiest of individuals into a nervous wreck.

You can run in the Sevastopol Station, but you certainly can’t hide for very long. They say that in space no-one can hear you scream, but in this unnerving ghost ship, the 9-foot-plus alien can. When it comes to horror game locations, this is one of the best!

Talking about a location as a character, Bloodborne’s Yharnam is such a place. Inspired by 19th-century European cities, Yharnam is a dark, gothic city that wallows in the stench of death and oddly, that is where much of its charm lies. While Bloodborne isn’t strictly a horror game, it’s definitely up there when it comes to memorable and horrifying gaming experiences.

Yharnam is a city that suffered a horrific plague outbreak, cruelly killing those unfortunate enough to call this place their home. Apparently, Yharnam found a cure for the plague, but no one seemed to know of its origins. Many outsiders had travelled to Yarnham in the hope of discovering the secret of the cure, but those who ventured into the city were lost, never to be seen again.

Even without the plague, Yarnham is an intimidating place built like a labyrinth, with spiralling towers and houses crammed into one another. Yharnam has you feeling scared to explore the next corner, but if you ever want to escape this nightmarish city, there’s no other choice. If things couldn’t get any worse, the city is full of cruel residents, deadly beasts, and supernatural beings that are hell-bent on making you Yarnham’s next victim. Have fun!

Being a keen fan of horror, very few video games have literally had the hairs standing on the back of my neck.  However, one such video game (or should I say ‘location’) is the Himuro Mansion from Tecmo Koei’s Fatal Frame/Project Zero.

Set in the mid-80s, the story centres around brother and sister Miku and Mafuyu Hinasaki. When Mafuyu goes missing while searching for a famous Japanese novelist, his sister goes in search of her lost brother. Miku’s investigation leads her to the Himuro Mansion and what she discovers is something that she could never have prepared for.

The Himuro Mansion is a place with a sinister past, dark rituals, and hostile ghosts that welcome no visitors into their home. Armed with only the Camera Obscura and Miku’s sixth sense, she’s tasked with capturing the evil spirits and cleansing this haunted house of horrors. Miku goes into the house investigating the whereabouts of her lost brother, but her investigation will prove futile if the Himuro Mansion were to never let her go. If you want horror, this is it.

Yes, I’ve put Sonic the Hedgehog on this list of horror game locations, but hear me out. They say we’re born with a fear of drowning, and beneath the cute & cuddly exterior of the lovable speedy blue hedgehog, those sneaky developers at SEGA knew exactly what they were doing when they created the Labyrinth Zone.

The Labyrinth Zone starts off fine, soothing music and its golden colours would be welcoming to any gamer excited to play as SEGA’s newest and now iconic mascot. That is, however, until we’re suddenly plunged underwater with an instinctive feeling of dread, panic, and a fear of drowning.

The Labyrinth Zone is deliberately slow-paced, and that works wonderfully in giving you an unexpected feeling of the unknown. Up until this point you’re used to moving at an incredible speed, but the Labyrinth Zone forces the player into an unnatural pace for Sonic the Hedgehog.

However, the worst element of the Labyrinth Zone is the timer that will suddenly kick in with music that will count down your death – unless you’re fast enough to find an air bubble to last just a few more seconds at a time.

I’ve lost count of the number of times that I’ve played the original Sonic the Hedgehog in my lifetime but yet 30 years on, the feeling of dread and panic induced by the Labyrinth Zone will never leave me.