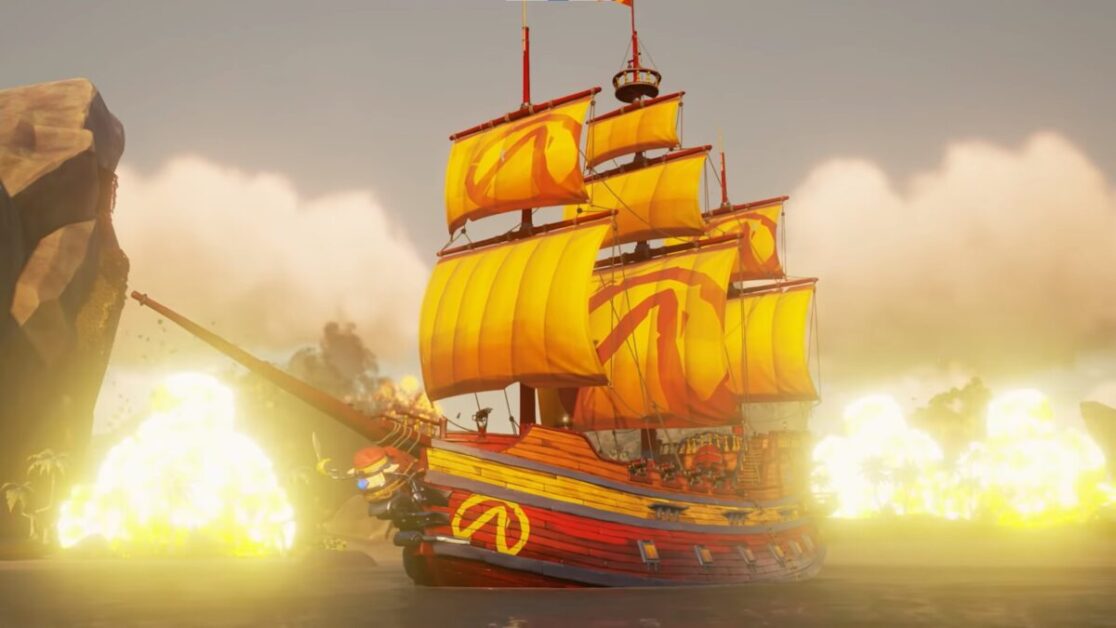 Borderlands is coming to Sea of Thieves in a limited time event called ‘Making Mayhem’.

The ship will certainly stand out to other players with mustard coloured sails with a vibrant red accented hull. The Borderlands logo is plastered across the ship and is also equippable as a flag. A crude rendition of Claptrap sits up front on the masthead and is also depicted on the capstan.

To unlock these mighty new ship cosmetics, you’ll need to complete a series of chaotic challenges to curry favour with the Bilge Rats faction. They’re split up into Minor and Major Mayhem categories. Minor Mayhem challenges include smaller tasks like blowing up a shark with a gunpowder barrel or setting fire to skeletons.

To earn larger chunks of favour, you can open one of the Gold Hoarder’s treasure vaults or cash in a stronghold gunpowder barrel. The biggest chunks of favour are earned by finishing any of the Tall Tales or by collecting all of the gold piles in a Treasure Vault. For a more pacifist option, you can also earn massive rewards by drinking and playing music with another crew at an outpost.

If you like the look of these cosmetic items, you’ll have to act fast. The Making Mayhem event is only running for two weeks from August 24th until September 7th. Hoist the anchor and raise the sails to earn that favour quickly!

It doesn’t fit with the Sea of Thieves theme at all, but I’d love to see Claptrap as pet. He’d be utterly useless, and would annoy the heck out of my crewmates, but it would make for an excellent meme.

Sea of Thieves continues to see resounding popularity, especially following its recent Pirates of the Caribbean crossover event. With Jack Sparrow himself appearing in the game, Sea of Thieves has seen record breaking player numbers.

Will you be jumping into the Sea of Thieves Making Mayhem event? Let us know across our social channels!