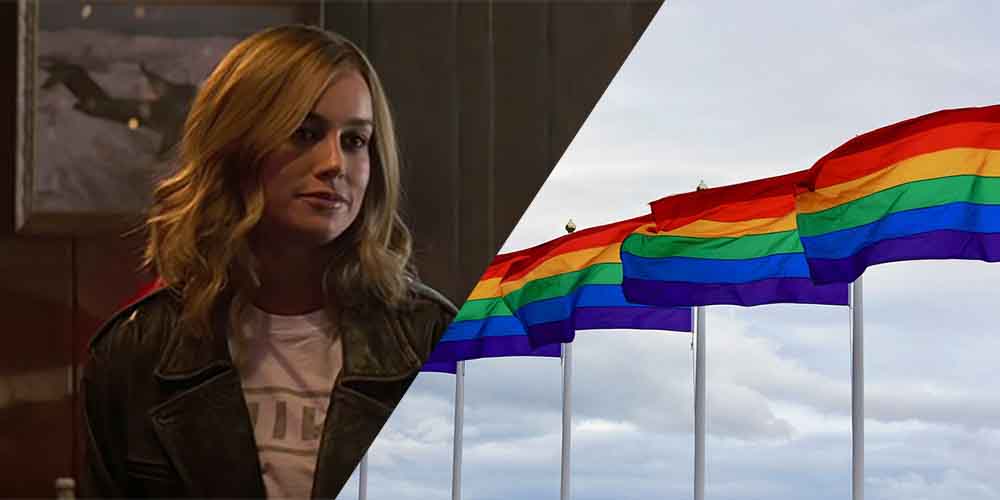 Swapping her red, yellow, and blue costume for a whole rainbow flag of colour, fans are increasingly asking is Captain Marvel gay in the MCU?

Brie Larson has only just arrived on the scene as the long-awaited Carol Danvers, but with a seven-movie arc ahead of her, there’s plenty of time to explore her sexuality.

Anna Boden and Ryan Fleck’s origin story was too busy with Danvers’ backstory to ask whether she prefers the company of men, women, or even flerkens. However, this isn’t the first time viewers have noticed there could be an LGBTQ+ relationship on the horizon for the high-flying heroine.

Despite Larson previously highlighting the close relationship between Danvers and Lashanna Lynch’s Maria Rambeau, it looks like Maria could have some competition. When one fan shared their own artwork of Captain Marvel and Tessa Thompson’s Valkyrie flying together, Larson couldn’t help but share the heartwarming scene.

After Larson wrote, “We cute @TessaThompson_x”, the Thor: Ragnarok star responded with, “WHAT. we so cute @BrieLarson”. It seems that it isn’t just two of the MCU’s leading ladies who like the idea of Captain Marvel and Valkyrie sharing spandex outfits. Given the already queer undertones of Captain Marvel, there was an overwhelming amount of support for the perfect pairing.

Considering Larson is set to replace Robert Downey Jr. and become the “new face” of the MCU, having an LGBTQ+ character at the forefront would mark a major milestone for the world’s highest-grossing franchise.

In the past, the MCU has been criticised sidelining the idea of same-sex relationships. Both Black Panther and Thor: Ragnarok came under fire for axing LGBTQ+ relationships. Ironically, the Ragnarok debacle came from one scene involving Thompson’s Valkyrie where it looked her life was saved by her lesbian lover.

Marvel Studios boss Kevin Feige has also promised more diversity in the MCU, which has already been backed up by the search for a gay actor to lead the upcoming Eternals.

Could we see Larson and Thompson share some screen time sooner than we thought? We stan with this idea!