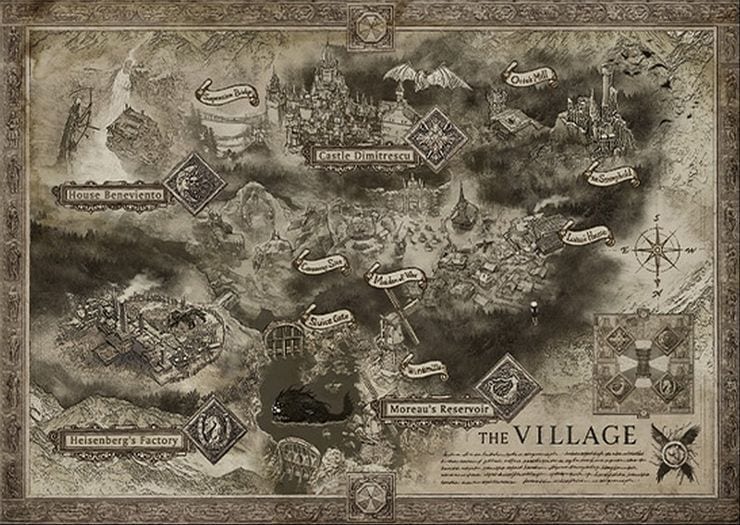 Capcom has revealed a screenshot of the Resident Evil Village world map, and it looks like we’re in for a treat!

Up until now, we have seen some images of the village map, but most images were taken from the accompanying collector’s edition.  So while we have already gotten an idea of the map size and its locations, it’s perhaps not been the best of representations.

However, this crystal clear in-game screenshot has quite possibly given us the best indication yet ahead of the game’s launch early next month.

While we shouldn’t expect anything near the world map size of Skyrim, GTA, or The Witcher, for a Resident Evil game, the map of Village looks to be quite sizable.

As we already knew, the world of Resident Evil Village seems to be broken up into four main districts. Each district will have its own leader and, I assume, enemy types and location identity.

The screenshot of the Resident Evil Village map was unveiled over at IGN and in the same article, an image of Mother Miranda was also revealed. If the name “Mother Miranda” rings a bell, that is because the name has been featured already in previous gameplay reveals more than once.

We heard villagers chanting Mother Miranda’s name in what looks to have been some kind of ritual and perhaps more famously, we’ve heard Lady Dimitrescu talk to Mother Miranda on the telephone.

From what we can tell, Mother Miranda will play a big role in Resident Evil Village and we’ve got the impression that she is some kind of big chief.  Plus judging by the image of Mother Miranda, she looks very creepy, almost Silent Hill inspired.

If you’ve not pre-ordered a copy of Resident Evil Village yet, you can reserve your copy at the GameByte Shop and you’ll even bag yourself a snazzy Lenticular Sleeve!