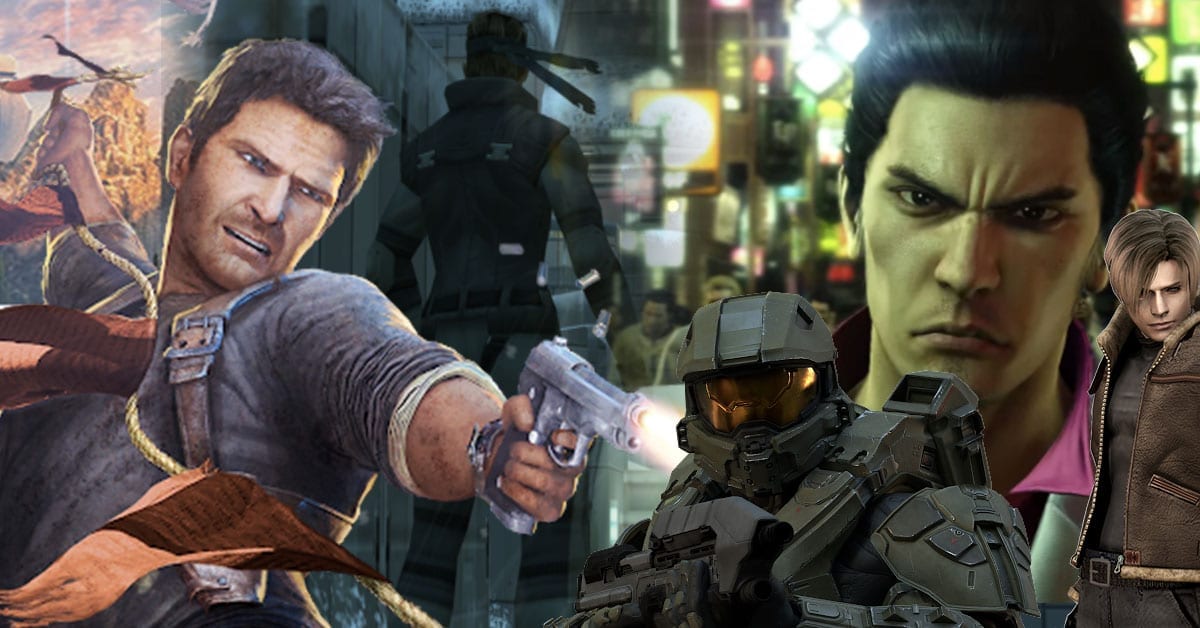 It doesn’t matter whether it’s a movie, TV series or a good book, every great story needs a hero and video games are no exception.  Much like my Most Kick-Ass Women in Video Games this is a tough list to trim down, but I’ve managed to pick my personal favourite male heroes in video games over the years.

There’s no doubt that I’ve missed some great names off this list, otherwise this could end up being a never-ending article. That said, here are my personal favourite kick-ass male heroes in Video Games.

When Uncharted: Drake’s Fortune released for the PlayStation 3 in 2007 it was far from a perfect game. Sure it looked good for its time and it gave us a sense of adventure only rivalled by the likes of the Tomb Raider series, but it wasn’t great nonetheless in my opinion.

In terms of gameplay, Uncharted: Drake’s Fortune was quite clunky. Not to mention those awkward motion controls we had to use when throwing grenades. However despite its clunkiness, there was something still special about the first Uncharted game and leading the way was hero Nathan Drake.

Nathan Drake was witty and sarcastic, almost to a fault. His mouth would often get him into trouble but his cunning combat skills (and luck), not to mention his relationships with Victor “Sully” Sullivan and Elena Fisher, who would bail Drake out more times than he could count.

Over the years that followed the Uncharted series evolved into one of the greatest action-adventure series of all time and with it so did the character of Nathan Drake. 2016’s brilliant Uncharted 4: A Thief’s End would be the perfect end to Drake’s story (at least at the time of writing) and he will no doubt go down as one of the greatest video game heroes of all time.

The Master Chief is quite easily one of the most legendary video game heroes there will ever be. We were first introduced to the Master Chief a.k.a John-117 way back in 2001 in Halo: Combat Evolved for the original Xbox.

However despite knowing of this iconic character for around 20 years, there’s still quite a lot that we don’t know about John-117 which only adds to his mystery and intrigue. In the Halo novels (which I certainly recommend) we do learn quite a lot about the origins of the Master Chief.

As of today, we know the Master Chief as an elite Spartan-II commando of the UNSC (United Nations Space Command), a hero that has saved the galaxy more than we’ll ever know.  However, this legendary soldier had a brutal childhood upbringing in the Spartan-II Program.

In the 150 pool of child candidates at the age of just six years old, John-117 was taller, stronger and smarter than the vast majority of his classmates and as a result he was always destined for success, even at a cruel cost. This brutal upbringing would shape John-117 into the Master Chief and one of the most legendary video game heroes there will ever be. The Master Chief’s legacy will continue in Halo: Infinite which is set to release at the end of 2021 for Xbox Series X|S.

“It took me forty years to realize this. But for guys like us… our lives aren’t really our own. There’s always someone new to help. Someone we need to protect. These past few years, I fought that fate with all I had. But I’m done fighting. It’s time I accept the hand I was dealt. Too many people depend on us. Their dreams depend on us.” – Kazuma Kiryu – Yakuza 4.

The above quote sums up Kazuma Kiryu of the Yakuza series perfectly. Admittedly I was late to the Yakuza series but the moment that I was introduced with Yakuza 0 (a prequel to the series) I was hooked and finally I could see what all the fuss was about.

Other than having a gripping story full of action, suspense and betrayal, not to mention awesome side-missions and a great cast of supporting characters, one of the main reasons that I fell for this series was due to its main protagonist, Kazuma Kiryu.

Kiryu stands for everything that an ideal hero should be. He’s charismatic, has a good heart, has good morals, will always stand up for those in need. Plus, when it comes down to it, he knows how to come out standing in a fight.

Sure the Yakuza series would still be great without the likes of Kiryu due to its diverse cast of characters, but it certainly wouldn’t be the same. If you’re a fan of the Yakuza series then you’ll know why Kazuma Kiryu is one of the most beloved heroes in modern video game history.

Leon S. Kennedy had arguably the worst first day on a job ever. Leon, a rookie cop aged just 21 at the time, arrived to work late on his first day as a police officer for the Raccoon Police Department. It is said that Leon attended a party the night before and after getting drunk, he overslept. However turning up late to work on his first day probably saved his life.

September 29th 1998 was the date on which Raccoon City was overrun by hordes of mutants and the undead, thanks to the T-Virus outbreak from pharmaceutical company Umbrella. No amount of police training could ever prepare Leon for the events that unfolded in Raccoon City that day.

With the help of Claire Redfield, who was in the city searching for her missing brother Chris, a member of S.T.A.R.S at the RPD, Leon might not have been able to save the city of annihilation, but he was still able to lift the lid of corruption fronted by Umbrella.

“We can tell other people about – having faith. What we had faith in. What we found important enough to fight for. It’s not whether you were right or wrong, but how much faith you were willing to have, that decides the future.” – Solid Snake – Metal Gear Solid 2: Sons of Liberty.

David has been known under a few aliases over the years, Iroquois Pliskin, Old Snake and Solid Snake to name but a few, the latter of which being his most well-known alias. Snake is a product of the Les Enfants Terribles project, a clone of the legendary Big Boss.

While Solid Snake was first introduced in the first two original Metal Gear games for the NES, for many of us our introduction to the military black ops legend was with classic PS1 title Metal Gear Solid in 1998. Solid Snake was a badass super agent that would rival the likes of James Bond, he had an IQ of 180 and could speak at least six fluent languages. In the field he was known as “the man who makes the impossible possible”.

Well that concludes my list of my personal favourite kick-ass male heroes in video games and as mentioned earlier, I’ve missed loads of heroes from this trimmed down list.

So be sure to let us know your favourite male heroes across our social media channels and don’t forget to check out our list of Most Kick-Ass Women in Video Games.