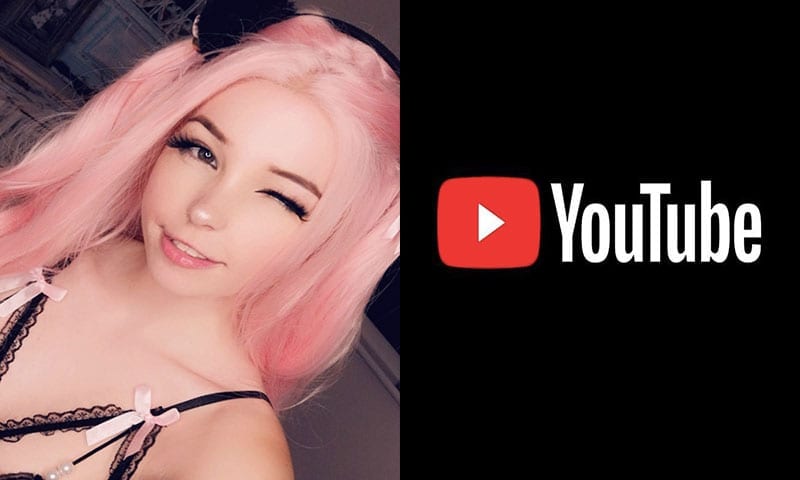 South African-born Belle Delphine whose real name is Mary-Belle Kirschner, lives in the UK and has made a huge name for herself for her risqué-yet-humorous antics across the web.

Delphine infamously trolled fans on an adult website, and seemingly made a small fortune selling her “GamerGirl Bathwater” online.

However, Belle Delphine’s YouTube channel which has just shy of 1.8 million subscribers, was recently shut down according to the social media star.

Belle Delphine claims that the channel was taken out of action with no prior warnings from YouTube. It is often a protocol that YouTube provides warnings, and dishses-out strikes before a ban is issued, though Delphine insists this did not happen in her case.

Belle Delphine took to Twitter asking why her channel was banned and retweeted support from the likes of Keemstar.

The reason given for her insta-ban was reportedly due to “sexually explicit content.”

However the social media star has called for “double standards” by the platform in relation to the controversial music video “WAP” from Cardi B, which not only still remains on YouTube, but it has also generated nearly 300 million views at the time of writing.

YouTube community guidelines do indicate that permanent bans can be issued for “severe abuse” without warning, which is perhaps what had happened to Belle Delphine’s channel. Yet if that was the case, then why haven’t other channels received similar bans?

Well there is good news for Belle Delphine fans, because following a social media campaign which generated support from well-known names in the industry, YouTube reactivated her channel.

Belle Delphine announced the news on her Twitter saying: “MY YOUTUBE IS BACK AAAAAAAH f*ccc im so happy i could cry :,) THANKYOU @TeamYouTube for listening to me!! Thank you to everybody else who hugely helped as well”

However it is worth keeping in mind that while it’s great that Belle Delphine’s YouTube channel was brought back, it can be argued that if this happened to a small channel with little to no social media support, those channels could be lost forever.

Are you happy to see Belle Delphine back on YouTube?  Let us know by reacting to our Emoji’s below.