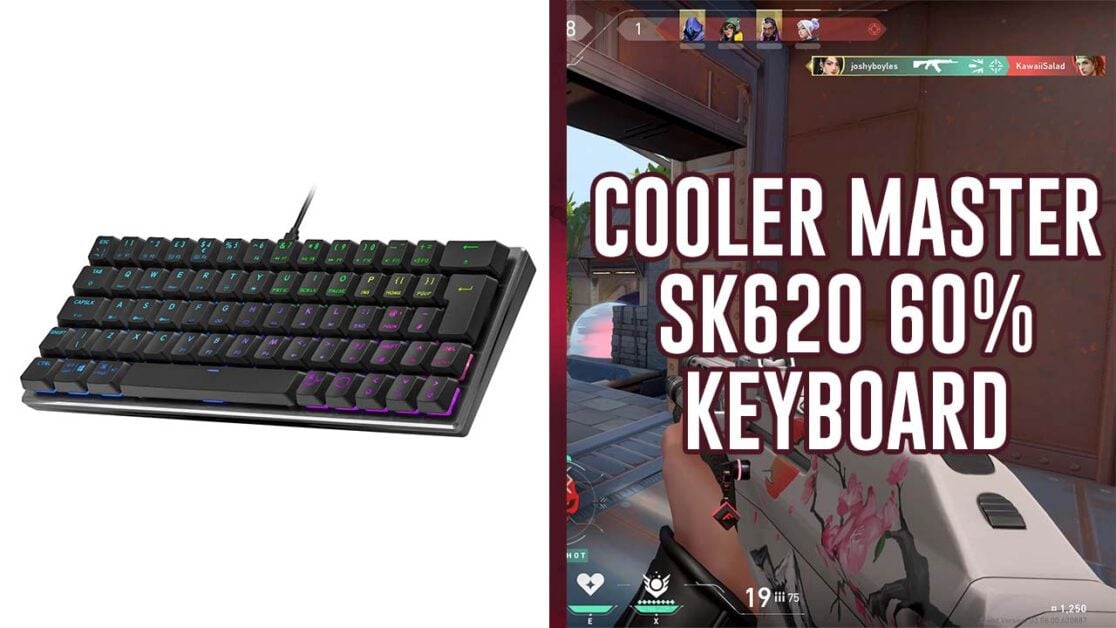 Once upon a time, Cooler Master was mostly known as a brand that sold well constructed PC hardware components. I remember when I built my very first gaming PC which used a Cooler Master Hyper 212 Evo for cooling. As a teenager with not much money, it offered a fantastic amount of bang for the buck.

That’s the same sort of energy that Cooler Master is carrying over into its suite of gaming peripherals. Last month, we reviewed the MM731 Wireless Lightweight Gaming Mouse. Praising it for its FPS gaming perfection, we also liked how much it undercut the price of its nearest competition.

Now, Cooler Master has sent over its SK620 mechanical gaming keyboard for us to try out. While I’m not a huge fan of using it for productivity, it’s perfectly suited for the gaming audience it’s aimed at.

Let me take you on a tour of the board’s construction to begin with. The main body consists mostly of plastic which gives it a light feel. However, a brushed aluminium plate sits between the keys and the board’s body. This gives the board a premium look and feel with the chamfered edge catching light from around the room. A removable USB C cable is located to the rear on the SK620, although a wireless version is available in the SK621. Two plastic feet prop the board up at an angle, although there’s only one adjustment level here.

The keycaps feature a matte finish and are laser etched to let the RGB lighting below shine through. My review unit features Cherry MX Red switches – the linear variant of the popular mechanic switch. They’re quieter than other switch variants, but are still relatively loud when they bottom out on the aluminium plate beneath. You wouldn’t want to use this in a communal office environment, that’s for sure.

The big competitive draw of the SK620 is its miniscule size in comparison to other full size keyboards. Its 60% size means that this board loses the number pad and squashes the arrow, navigation, and function keys into other areas of the board. The result is a ridiculously compact form factor that leaves acres of space for you to move your mouse freely.

The keyboard I came from before this was the Logitech G Pro Wireless Keyboard, which is stupidly long with additional function keys to the left hand side. I play a lot of shooter titles and use a fairly low mouse sensitivity to maximise my aiming precision. As a result, I’d often find myself catching the mouse on the edge of my Logitech board. I’m happy to say that I’ve never encountered this issue with the Cooler Master SK620.

An additional benefit of its small form factor is that the keyboard promotes an ergonomic posture while sitting at a desk. Those who spend hours gaming at a desk will know that sitting with your forearms pointing inwards is far more comfortable than sitting with your arms apart. Because the SK620 is so small, it lets you position your hands much closer together while working. It’s done the small of my back the world of good these last few weeks.

While gaming has been a dream on the SK620, I’ve struggled to fully make the transition to a 60% board in my work. As you might have guessed, my job requires writing plenty of words quite quickly. Muscle memory is a vital part of being able to do my job efficiently, and it’s very tricky to adjust to a new piece of equipment that’s so radically different.

Saying goodbye to the number pad was hard enough, but having to figure out the button combinations to access the function keys took a good while to get used to. I’m still not totally there after two weeks. It’s a trade off between convenience and comfort that you’ll need to evaluate for your own personal needs.

In addition, there were a few other non-standardisations that I struggled to get to grips with. The left shift key is half-width, meaning I ended up accidentally pressing the wrong key on numerous occasions while trying to sprint. While the keys are low-profile, they don’t adopt the chiclet-style of other low-profile boards on the market. This could just be personal preference, but I found the extra travel distance fatiguing on my fingers after heavy typing sessions.

The SK620 is versatile in its compatibility with support for both Windows and Mac computers. However, the Mac compatibility lets it down here. It’s far too easy to accidentally switch between OS configurations. I would often find myself frustrated with button functions switching, and there’s no easy way to tell which mode the keyboard is in. Given that the board is targeted towards gamers, the focus on Mac compatibility is confusing.

The Software Is Still Frustrating

This leads me to the Master Pro software that Cooler Master uses to control its peripherals. Like I said in my review of the MM731 mouse, the software is in clear need of work with numerous and replicable bugs making it frustrating to use. Thankfully, the SK620 is another case of being able to ‘set and forget’. Once you’ve got your lighting preferences all set up, you won’t find yourself needing to dive into the settings very often.

I wouldn’t get your hopes up about the RGB lighting putting on a show, though. There are some excellent pre-made lighting effects built into the software – I’m particularly a fan of the one that turns the board into a game of Snake. However, the LEDs under the keys just aren’t bright enough to be eye-catching. Colours are accurate for the most part, but the board is incapable of producing a pure white – it has a noticeable pink hue.

Is it what you’re looking for in a keyboard?

Overall, you have to evaluate exactly what it is you’re looking for from a keyboard. If competitive gaming is your main priority, then the Cooler Master SK620 is a stellar option to try. You’ll just need to be aware of the minor learning curve. If productivity is the main activity you do at your desk, then I’d consider the swap to a 60% board more seriously. Coming from a full sized keyboard, it has taken me far longer to get used to the new layout than I thought it would.

However, for an RRP of £84.99, Cooler Master has created an incredible competitive keyboard with the SK620. Logitech’s nearest competition to this board is over double the price. With a reliable construction and comfortable form factor, the Cooler Master SK620 should definitely be a keyboard to consider for your gaming setup.

The SK620 Keyboard was provided to GameByte by Cooler Master