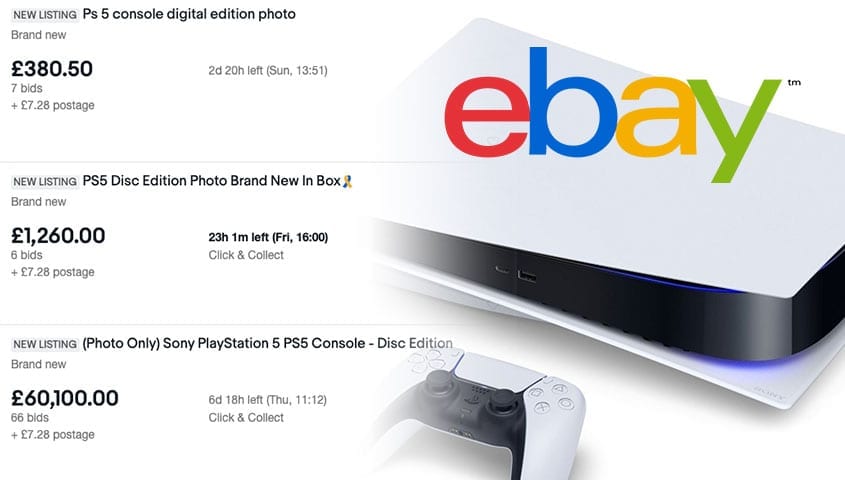 Earlier this week we reported that eBay sellers were selling photos (yes photos) of PS5 consoles for silly money, ranging from hundreds to thousands of pounds. Now eBay has responded to the PS5 photo controversy.

In case you missed it, people have been selling images of PS5 consoles on the auction site, presumably to people who either hadn’t read the listing properly, or to bots trying to secure units for resale.

It’s hard to imagine that anyone would ever contemplate buying a photo of a PS5 – especially for the prices that were listed on eBay – no matter how desperate they may be to get their hands on the sold-out console.

It’s more than likely (at least I hope) that people were panic-buying and not reading the item heading or descriptions correctly, in the hopes of snapping up the next-gen console before someone else.

While the sellers might feel that they’re well within their rights to sell photos of PS5 consoles – especially if it’s stated in the description that it is for a photo – eBay does not agree with the sellers capitalising tactics. The problem extends beyond selling images too, with people also selling…their wishes for the console?

eBay has now responded to the PS5 photo-selling controversy, released a statement in response to the listings.

“We condemn these opportunistic sellers who are attempting to mislead other users We are in the process of removing all listings for photos of PS5s from our marketplace and will be taking appropriate action against the sellers,” said eBay.

“For any purchase, but especially highly priced or in-demand items, buyers should exercise caution and thoroughly read the listing description. Buyers who receive an item which is not as described are entitled to a refund via our eBay Money Back Guarantee, provided they completed the transaction on the eBay platform.“

It’s good to see eBay taking action to prevent the issue spreading any further. It could lead to a lot of upset gamers as the holiday season approaches!

Do you believe it’s fair game for the sellers to sell photos of PS5s to overly eager buyers, or do you believe in eBay’s response? Let us know across our social media channels and react accordingly to our Emoji’s below.