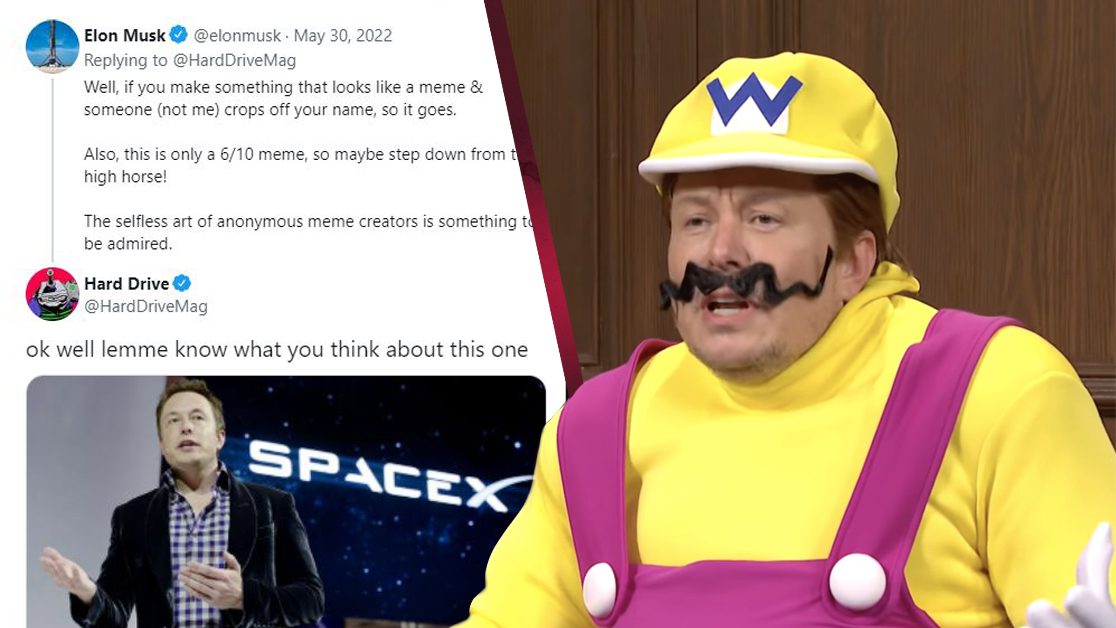 Elon Musk has embarrassed himself online for two weeks in a row, this time in an argument with a satirical video game website.

Last week, Elon Musk decided to show off his build in Elden Ring much to the dismay of pretty much everyone. Two shields on the same arm, so heavy that he can barely roll. His healing flask isn’t even on the hotbar! A mess of a build that just doesn’t make any sense.

Well, it’s a new week, so new opportunities for Musk to make a fool of himself have of course come about. This time, it’s Musk versus Hard Drive, a satirical video game website that’s basically The Onion for video games. And it ended with Musk, as the kids call it, getting ratioed.

If you don’t follow Musk’s Twitter, he pretty often steals memes and jokes from a variety of places. This time, he screenshotted the headline of a Hard Drive article titled “Zodiac Killer Letter Solved by Opening It With VLC Media Player.” Which Hard Drive then of course called out, as the outlet wasn’t credited.

In 2019, Musk put out a tweet about how “no one should be credited with anything ever,” which he clearly did once more in this case.

However, Musk did eventually delete the screenshotted tweet of the Hard Drive article. But only after Hard Drive proved it was funnier than him.

There was some back and forth where Musk called the Zodiac Killer article a “6/10 meme” despite him finding it funny enough to post. And Hard Drive in response tweeted an article at him titled “Elon Musk Admits He Wants To Travel To Mars Because No One Hates Him There Yet.“

Elon Musk Shared His Elden Ring Build Online, And Players Don’t Like It

Musk went on to post some drivel about how Hard Drive was less funny than SNL on a bad day, a show that Musk himself has been on where he proved he wasn’t funny with an abysmal Wario bit.

He also called Hard Drive unfunny and woke, despite this being the second time he screenshotted an article from the outlet.

Unsurprisingly, Musk stopped responding when Hard Drive reminded the billionaire of “SNL’s bad days.” Pairing the tweet with an image of Musk as Wario on his notoriously bad SNL skit.

That last Hard Drive tweet is currently sitting at almost 150,000 likes. So it’s safe to say Musk was beat in this bout of bits.