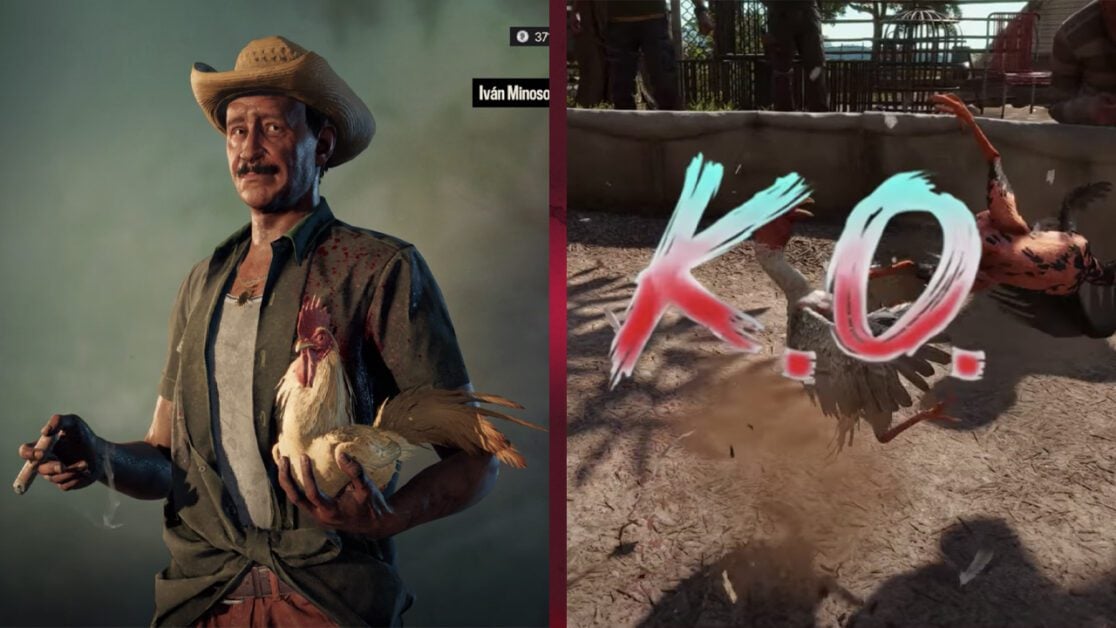 Yes, you read that correctly. There is a cockfighting minigame in Far Cry 6. Mind out the gutter, we mean cockerels. Select your feathery fighter, get ready to enter the ring, and clucking destroy your opponents.

Far Cry 6 is out today (October 7th)! The game is set on the fictional island of Yara, in the Caribbean. Yara is in the grip of the iron rule of the dictator ‘El Presidente’ Antón Castillo. Castillo is raising his young son Diego to succeed him. You’ll be playing as guerilla fighter Dani Rojas – trying to overthrow Castillo and his brutal regime.

Check out IGN’s playthrough of this controversial minigame:

The culture of cockfighting

We could criticise Far Cry 6 for showcasing this brutal practice. Cockfighting was made illegal here in the UK back in the fifties. Cockfighting is a bloodsport – while the birds rarely kill each other, they do harm each other. Some fighters provide their birds with metal spurs on their legs, to give them a weapon. We saw PETA respond to the fishing in Animal Crossing: New Horizons – who knows how they’ll feel about the cockfighting in Far Cry 6?

It is also worth thinking about how including this minigame in a story set in the Caribbean perpetuates harmful stereotypes. After the Cuban revolution in 1959, the government did clamp down on cockfighting, as part of a wider move against gambling. So perhaps if you are successful in bringing Castillo down, you can also bring an end to this sport on Yara.

Far Cry 6’s main writer, Navid Khavari spent a month in Cuba (which inspired a lot of the setting) as reported by Kotaku. Sadly it’s true that cockfighting does take place in Cuba and in other Caribbean nations such as Puerto Rico.

We received a statement from PETA Latino about Far Cry 6 regarding this game on 8 October 2021:

“Turning a horrific blood sport like cockfighting into a Mortal Kombat–style video game match is a far cry from real innovation, as today’s society is strongly opposed to forcing animals to fight to the death. Roosters used in cockfights are fitted with sharp spurs that tear through flesh and bone, causing agonizing and fatal injuries. PETA Latino urges Ubisoft to replace this reprehensible minigame with one that doesn’t glorify cruelty.”