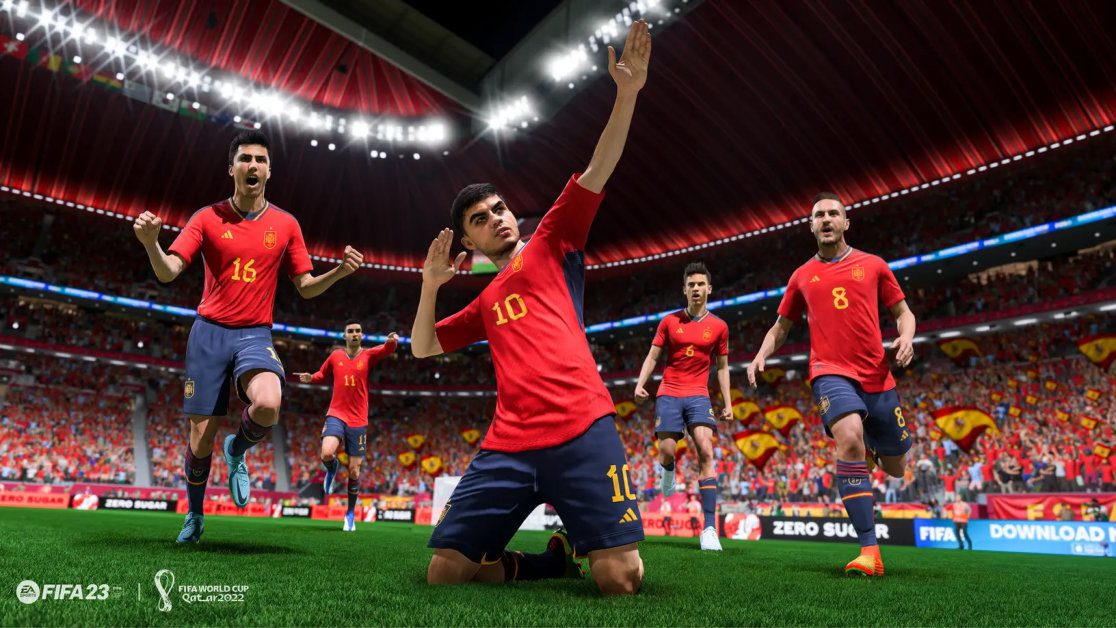 Arriving via a free update, the FIFA World Cup 2022 will bring all 32 qualified nations to the world’s biggest footballing exhibition.

Players will be able to play from the opening game of the group stages all the way to the final.

Furthermore, if your nation failed to qualify for the World Cup, additional national teams will be added to the update so that you can customise your own tournament.

Everything (including the User Interface) will be FIFA World Cup 2022 themed so you can immerse yourself in the experience from the comfort of your own home.

Additionally, not only will the FIFA World Cup 2022 be playable on your lonesome or via local multiplayer on your couch, but there will also be a World Cup Online Tournament Mode.

Meaning that you can test your skills with other players across the globe to be a World Cup winner.

“Every four years, the World Cup presents a unique opportunity to unite the world of football, and we’re thrilled to provide an immersive, hands-on experience to football fans across the globe,” said Nick Wlodyka, SVP, GM, EA SPORTS FC.

“Our first-ever football game was built around international football, and we’ve been building on that experience ever since.

“It’s amazing to see how fans truly experience the highs, lows, and everything in between that can only be felt when the whole globe unites through the world’s game.”

FIFA 23 takes the experience to the next level

If that wasn’t enough FIFA World Cup goodness for you, then the FIFA 23 Live experience will be taking immersion to the next level.

From November 21 to December 18, FIFA 23 in-game will keep you updated with results, fixtures, and player ratings. The latter will evolve depending on real-world tournament performances.

Of course, it wouldn’t be a modern FIFA experience without FIFA Ultimate Team updates.

The “World Cup Path to Glory” event will run from November 11 to December 23.

The Women’s FIFA World Cup is on the way too!

However, it’s not all about the men’s World Cup because the women’s FIFA World Cup is on the way too.

During the summer of 2023, the FIFA World Cup Australia & New Zealand will arrive in FIFA 23.

EA has promised further details on the women’s World Cup content in the coming months.

When will the men’s World Cup content arrive in FIFA 23?

The free FIFA World Cup 2022 content will arrive on Wednesday, November 9 via an update.

It will come to PC, PlayStation and Xbox. But sadly, the FIFA World Cup will not be coming to FIFA 23 on the Nintendo Switch.

FIFA 23 will also be the last FIFA game by name, ending a nearly 30-year partnership.

From 2023 this iconic football video game brand will be known as EA Sports FC. That’s going to take some getting used to.

Are you looking forward to the FIFA World Cup 2022 in FIFA 23? Let us know across our social media channels.