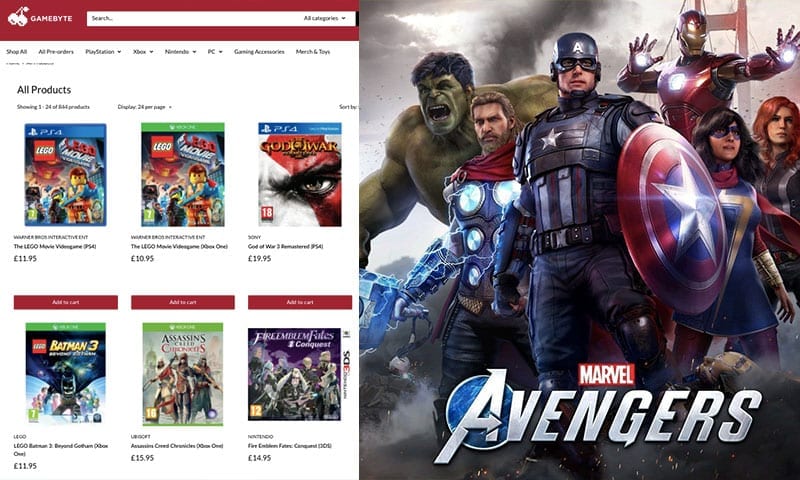 GameByte Shop’s Cyber Week is here. We’ve got daily deals for you and a big Black Friday weekend ahead – this time it’s Marvel’s Avengers!

If you’re looking for incredible gaming deals this Black Friday then you don’t need to look any further than the GameByte Shop, as today’s amazing deal is for none other than Marvel’s Avengers! Aside from console drops (sign up to our newsletter if you’re still hoping to get a PS5 or Xbox Series X!), we’re selling all the games, merch and accessories you could shake a stick at, with some amazing Black Friday deals to boot!

We’re treating you lovely lot to some incredible Black Friday deals across some of the year’s best games. This time around we have 2020’s Marvel’s Avengers, and it’s so cheap you might as well get a few copies…

You can pick up Marvel’s Avengers from the GameByte Shop right now as part of our Black Friday deals for the bargain price of just £27.95*. Available for both PlayStation 4 and Xbox One, Marvel’s Avengers puts the fate of the world in your hands as the world’s greatest heroes unite!

The game’s official description reads as follows: “Assemble your team of Earth’s Mightiest Heroes, embrace your powers, and live your Super Hero dreams. Marvel’s Avengers is an epic, third-person, action-adventure game that combines an original, cinematic story with single-player and co-operative gameplay*. Assemble into a team of up to four players online, master extraordinary abilities, customize a growing roster of Heroes, and defend the Earth from escalating threats.”

Whether it’s a treat for yourself, or an added gift for the holidays, Marvel’s Avengers is a great game for an even greater price thanks to our daily deals!

Pre-order your copy with the GameByte Shop Black Friday deals for Xbox One here, and PlayStation 4 here. Note that this deal will be live from November 24 – for 24 hours ONLY*. Just like the GameByte Shop, it’s available for the UK only.

We’ve got more Black Friday deals coming throughout the week, so as always, keep your eyes on GameByte for some incredible savings on top video games!

For more deals and the latest games, merch and more, check out the new GameByte Shop here! Will you be picking up Marvel’s Avengers this Black Friday?

NOTE: *all prices correct at the time of article being posted.