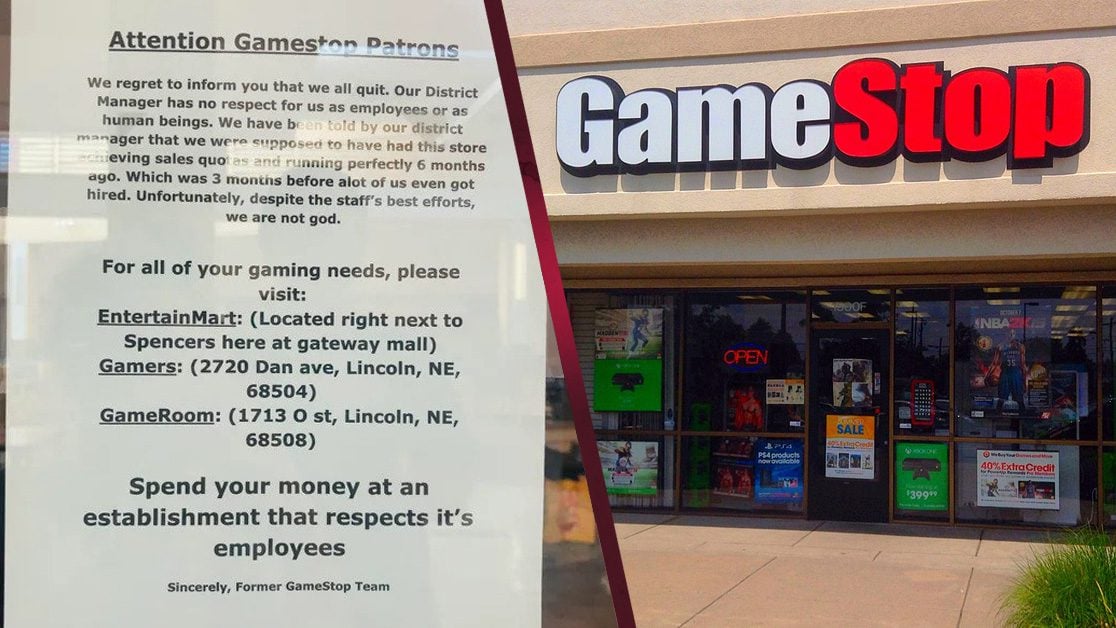 A recent GameStop has completely shut its doors, as employees walk out over poor working conditions and a verbally abusive boss.

As reported by Kotaku, this particular branch based in Gateway Mall in Lincoln, Nebraska was apparently one of the busiest locations. That’s according to the person that used to run it, at least. However, it was closed last weekend, with a sign in the window explaining how badly the staff had been treated.

“We regret to inform you that we all quit,” the sign reads pretty bluntly. “Our district manager has no respect for us as employees or as human beings. We have been told by our district manager that we were supposed to have had this store achieving sales quotas and running perfectly six months ago.

“Which was three months before a lot of us even got hired. Unfortunately, despite the staff’s best efforts, we are not god.”

This was followed up with a list of other locations prospective customers can shop at for their video game needs. And rounded off with a final line that read “Spend your money at an establishment that respects its employees.“

Kotaku called up the store in question earlier this week, with someone saying it would be open again soon. The outlet was also directed to contact communications firm Longacre Square Partners, which deals in investor relations, shareholder activism, and crisis management. Kotaku was unable to get an on-the-record comment from the firm, and a demand was also made to not mention Longacre in the story.

Why did they leave?

“For my health I had to leave,” said recently promoted store manager Frank Maurer over a phone interview with Kotaku. Maurer explained that he was experiencing such severe stress and anxiety that he had trouble sleeping. And wasn’t even enjoying games anymore.

Maurer joined GameStop in late 2021, finding it fun at first. But management’s strict quotas and lack of resources quickly turned it sour. The manager was apparently paid $17 an hour, but everyone else under him only made $9 an hour, Nebraska’s minimum wage.

The manager also didn’t receive proper training, and was “met with silence” when he asked for support. As well as this, the district manager was apparently “abusive verbally,” constantly threatening people’s jobs.

This isn’t the first time a walkout has happened at a GameStop in Lincoln, Nebraska. With another GameStop also citing the district manager as the reason for the mass resignation. There have been a total of four walkouts since August 2021 because of this manager, according to one former employee on Facebook.

It’s not particularly surprising that GameStop is a bad place to work. Reggie Fils-Aime explained why he left the company earlier this year. And if things are bad at the top of the chain, the bottom is obviously going to be the worst affected.