Let’s travel back to 2013, right back to the launch of Aliens: Colonial Marines which was released on PC, PS3 and Xbox 360.

Touted as a first-person shooter and sitting somewhere between the survival horror and sci-fi genres, the game absolutely bombed with both Alien fans and game critics panning the release.

The original story, which followed a U.S Colonial Marine squad facing off against a load of aliens, had some pretty big names attached, and fans of the Alien franchise were eager for the game’s release, which was why it was such a shame when the game tanked.

One of the reasons for the game’s failure to impress was its Xenomorphs, which were unintuitive and – quite frankly – dumb, as they stumbled around without any clear aim or motive. 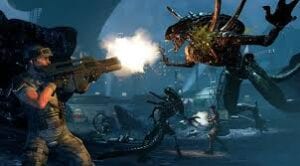 The AIs were supposed to be predatory enough to stalk and flank players by assessing exits and patrolling, something which didn’t happen until a modder found the solution to the problem a few years later.

The modder, known as TemplarGFX, didn’t explain how they fixed the game in 2016, but now we’ve got the final piece of the puzzle.

An old Moddb post from October 2017 has resurfaced, and it explains just how the game’s Xenomorph AIs were fixed.

Moddb user jamesdickenson963 has pointed out that A:CM’s terrible Xenos were down to a simple typo in the coding of the game.

Yep, the coding was supposed to include the word “tether” had somehow ended up as “teather.” 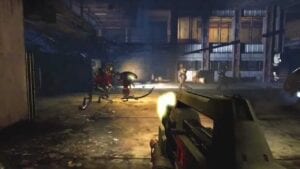 Posting to the website, jamesdickenson963 wrote about the typo: “Why is this line important? There are two reasons:

“1) AttachXenoToTether doesn’t do anything. It’s basically empty or stripped

“When a Xeno is spawned, it is attached to a zone tether. This zone tells the Xeno what area is its fighting space and where different exits are.

“In Combat, a Xeno will be forced to switch to a new tether (such as one behind you) so as to flank, or disperse so they aren’t so grouped up etc…

“Whenever the game tried to do this, nothing happened. Now it does!”

Notice that pesky little “A” that had snuck in there?

It’s unknown whether fixing the typo before the game launched would have affected its reception, but it seems unlikely, as players were quick to criticise everything from the game design to the storyline. 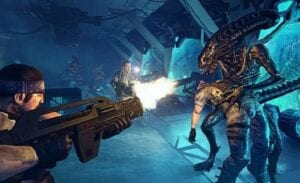 Aliens: Colonial Marines’ poor release meant the game scored a measly 45% on Metacritic, credited with “generally unfavourable reviews” across the board.

IGN gave it a 4.5/10, but unfortunately didn’t cite “too much outer space” as their reason why.

If you’re looking for a true sci-fi/horror classic and haven’t checked out Alien: Isolation, it offers a much more terrifying and exciting look into the world of Alien, and can be picked up on PC, PS4 and Xbox One for pretty cheap right now.