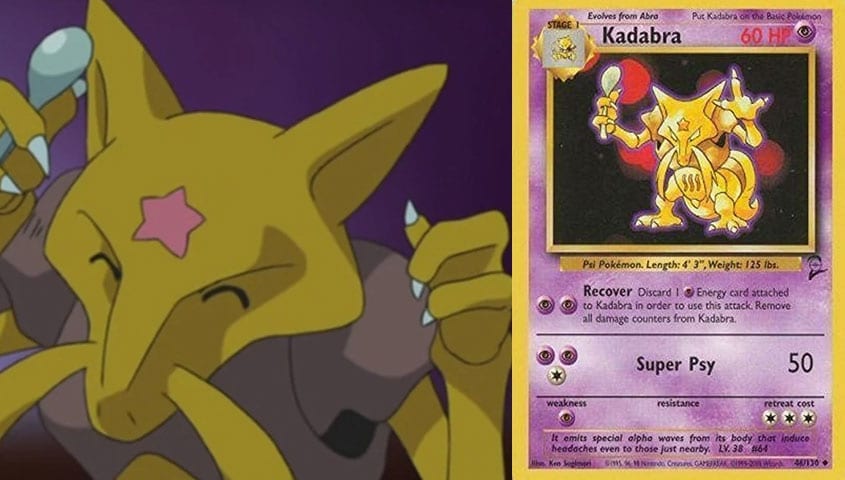 After a 20-year dispute with Nintendo, magician Uri Geller has given the company permission to once again print Kadabra Pokémon cards.

Confused? Let’s back up a minute. Uri Geller is an Israeli-British self-proclaimed psychic as well as a magician and TV personality. Geller is perhaps best known for his spoon-bending antics, which he purportedly achieves with his mind. Whether you believe in his “abilities” is debatable.

So what does Uri Geller have to do with Nintendo and the psychic Pokémon Kadabra? Well, Kadabra is the evolution form following Abra, who can eventually evolve into Alakazam. It is alleged that Kadabra’s Japanese name – Yungerer – when spoken aloud sounds quite familiar to the name of Uri Geller, which caused a bit of an uproar 20 years ago.

The Pokémon cards that were printed 20 years ago featured the Pokémon wielding spoons in hand, and of course Kadabra’s type is psychic. These supposed similarities to the brand and name of Uri Geller caught the star’s attention, and he took issue with Nintendo.

Geller sued Nintendo, and since that moment no Pokémon cards featuring the original form of Kadabra have been printed. The psychic Pokémon did appear in other forms such as the Dark Kadabra of Team Rocket.

Thankfully now, in 2020, the tides have turned for Kadabra, with Geller giving permission for Nintendo to once again use Kadabra on trading cards.

Geller reportedly received many emails from Pokémon fans asking the illusionist to reconsider his dispute with Nintendo and allow the company to print Kadabra in his original form on the cards [via TheGamer].

Uri Geller not only reached out to Nintendo, but also issued an apology on social media.

“It will probably be one of the rarest cards now! Much energy and love to all!” concluded the magician.

And so ends the 20-year-long dispute between Uri Geller and Nintendo. All’s well that ends well, I suppose! Will you be happy to see the return of Kadabra in its original form to the Pokémon card deck? Let us know by reacting to our Emoji’s below.