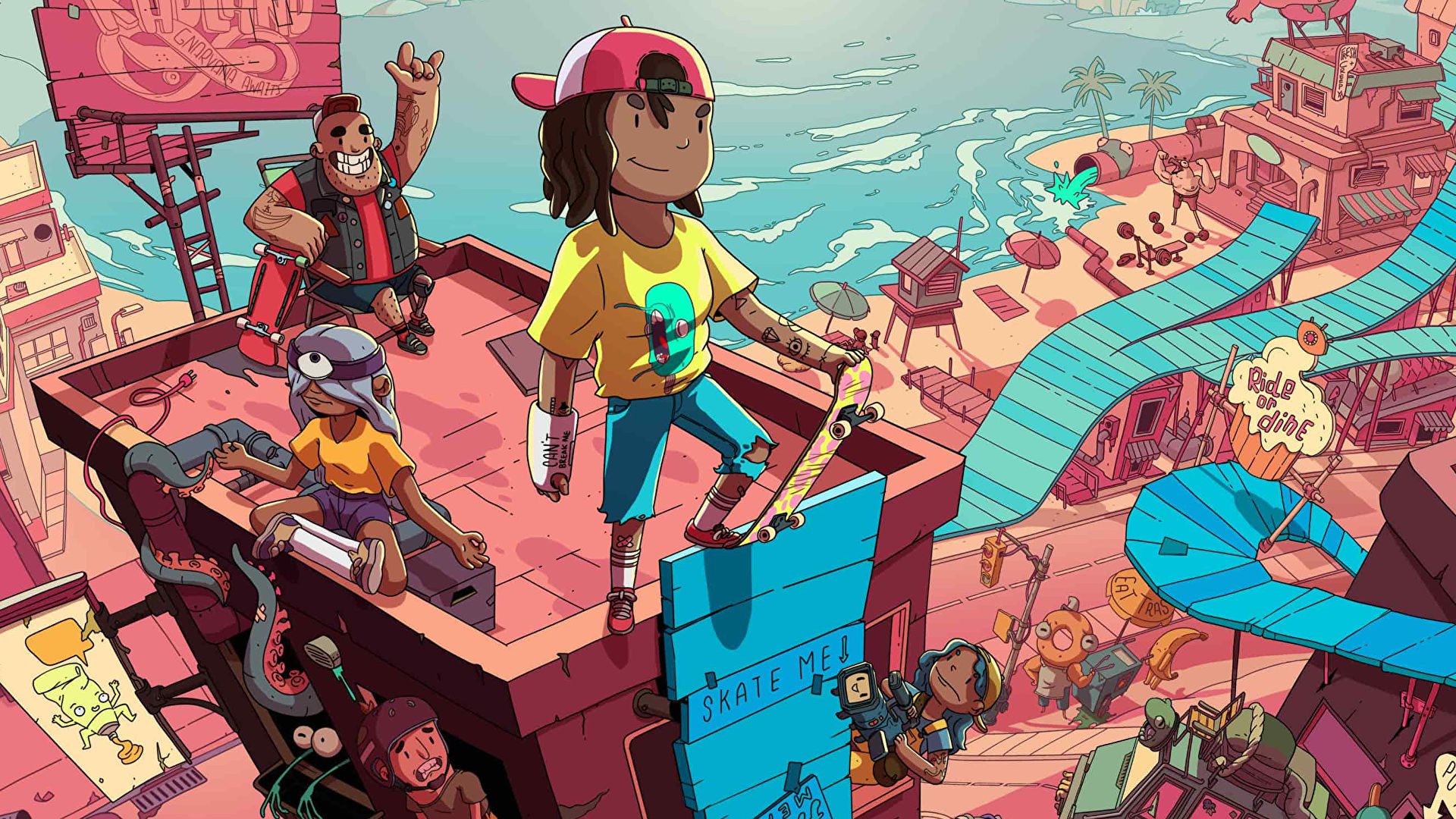 As far as platformers go, the original OlliOlli skateboarding games have become somewhat forgotten in recent memories. Reasonably fun for their time, it was clear that a redraft was necessary in order to revive the series for a modern audience.

We’ve spent the last week playing OlliOlli World, the third and latest entry to the series, and we have some thoughts on it.

Upon first opening OlliOlli World, you’re greeted by a character customisation screen. Here you can create your own skater, tweaking their hair, face, body, clothing and skating style. The number of options the game offers you here right off the bat is extensive, allowing you to truly create a skate hero unique to your own style, personality, and appearance. Of course, as the most generic-looking dude in real life, I used this as an opportunity to create an avatar that was a little more interesting.

OlliOlli World takes you through five zones of increasing difficulty in the world of Radlandia, introducing you to new moves and characters along the way. Here you meet Suze, Dad, Gnarly Mike and Chiffon, the four skaters who accompany you on your quest to discover the mystical skate gods and find ‘Gnarvana’.

The game takes you through a Super Mario World style series of levels, where you face increasingly challenging 2D skateboarding stages. It’s similar in presentation to the older OlliOlli games, except with a switch to a hand-drawn art style rather than the pixel-art aesthetics of the originals.

OlliOlli World also features a multiplayer mode, as well as an asynchronous roguelite multiplayer mode called the Gnarvana Portal. This features different events that are procedurally generated each day, allowing for a seemingly endless amount of content as you log in each day to try and beat other players’ scores. As these features will only naturally unfold when the game launches in February, we’ll have more impressions on this next month.

ACCESSIBLE FOR A NEW AUDIENCE

One of the biggest focuses in development for OlliOlli World was ensuring the game would be more accessible to newcomers while still retaining the skillful gameplay of its predecessors. As a newbie to the series myself, I found the initial onboarding tutorial and early levels to be highly accessible.

The first hour of the game takes its time to explain every move to you, going through a series of simple lessons and smaller levels that help you get to grips with the combos while also making you feel like a skateboarding badass. Meanwhile, the inclusion of each mechanic such as rails to grind on, ramps to launch from and walls to ride across, are made wholly easy to understand. The controls are as simple as flicking your thumbstick in a certain direction and makes travelling from point A to B an easy affair.

Despite the ease of access, combining interesting moves and racking up a high score is also a challenging part of OlliOlli World’s charm. By grabbing, flipping and grinding, you can come up with all manners of combos that make your runs as interesting as possible. And if you want to appear high up on the leaderboards, finding ways to flip effortlessly between each of these moves is crucial.

This is where OlliOlli World’s steeper difficulty curve comes into play. While each stage can certainly be beaten without utilising these more challenging moves, the metagame of trying to reach high scores and unlock new cosmetic items is more appealing to players who aren’t afraid to try new things and have faster reaction times.

But regardless, OlliOlli World is completely playable without worrying about all of that. Whether you’re a new player looking to pull off some sick moves, or a veteran of skateboarding games that needs a break from Pro Skater, this might just be the game for you.