Cosplaying used to be one of those lame hobbies that nobody really wanted to admit to unless they were looking to become social outcasts. Now things are different. Yes, it’s still not the most popular of hobbies, but it isn’t just the stereotypical virginal nerds and size-30 girls that are into it. In fact, it’s all but a staple for all kinds of people that are interested in anime, manga, games and more.

We also did a list of cosplaying dogs which are just as cute!

This led to some…interesting results. Around big competitions like ComicCon, pictures of adorable toddlers in fancy outfits flood the Internet…and now it’s time for those kiddies to step aside because there’s a new pussy in town – okay that joke didn’t turn out the way we were hoping it would.

Thankfully, pictures of cats can make a lot of things better, and bad jokes are one of them. Here are some pictures of some of the best cosplaying cats ever!

Cats are inherently evil, everyone knows that, but these two are a league above. Why? Well, the owners somehow succeeded in getting headpieces on them and then managed to take a photo – that alone is impressive. The fact that these two’s personality is so obviously a great fit makes it even better.

Bat-cat is skeptical, brooding and not above blowing up the house you’re in to avenge something it loves (it’s honour of course). Now Jo-kitty is nothing like that. He/She will straight up stab you in the eyeball while madly giggling. Do not mess with Jo-kitty and whatever you do, don’t leave your door unlocked.

No but seriously, the one on the left probably murdered its owners the night after this picture was taken. 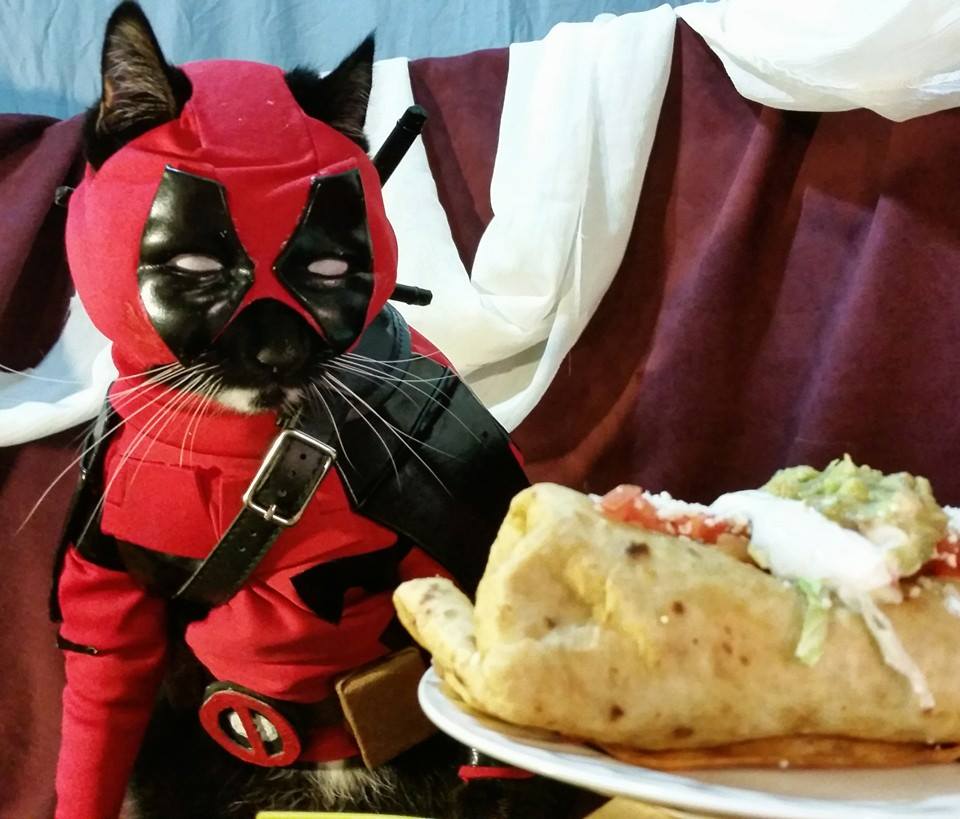 Everyone who has ever tried to put so much as a cape on their cat probably knows that that is a quick way to get hurt. Cats just aren’t up for that nonsense – usually anyway. Dogs may be cool with all sorts of outfits, but cats aren’t.

The reason Deadkay agreed to this is pretty obvious – the cat can’t even see and it is still looking straight at the money. One way or another though, the owner of this little kitty has forever earned a spot in the hall of fame, if only for getting that hat on the cat. Well done, you! 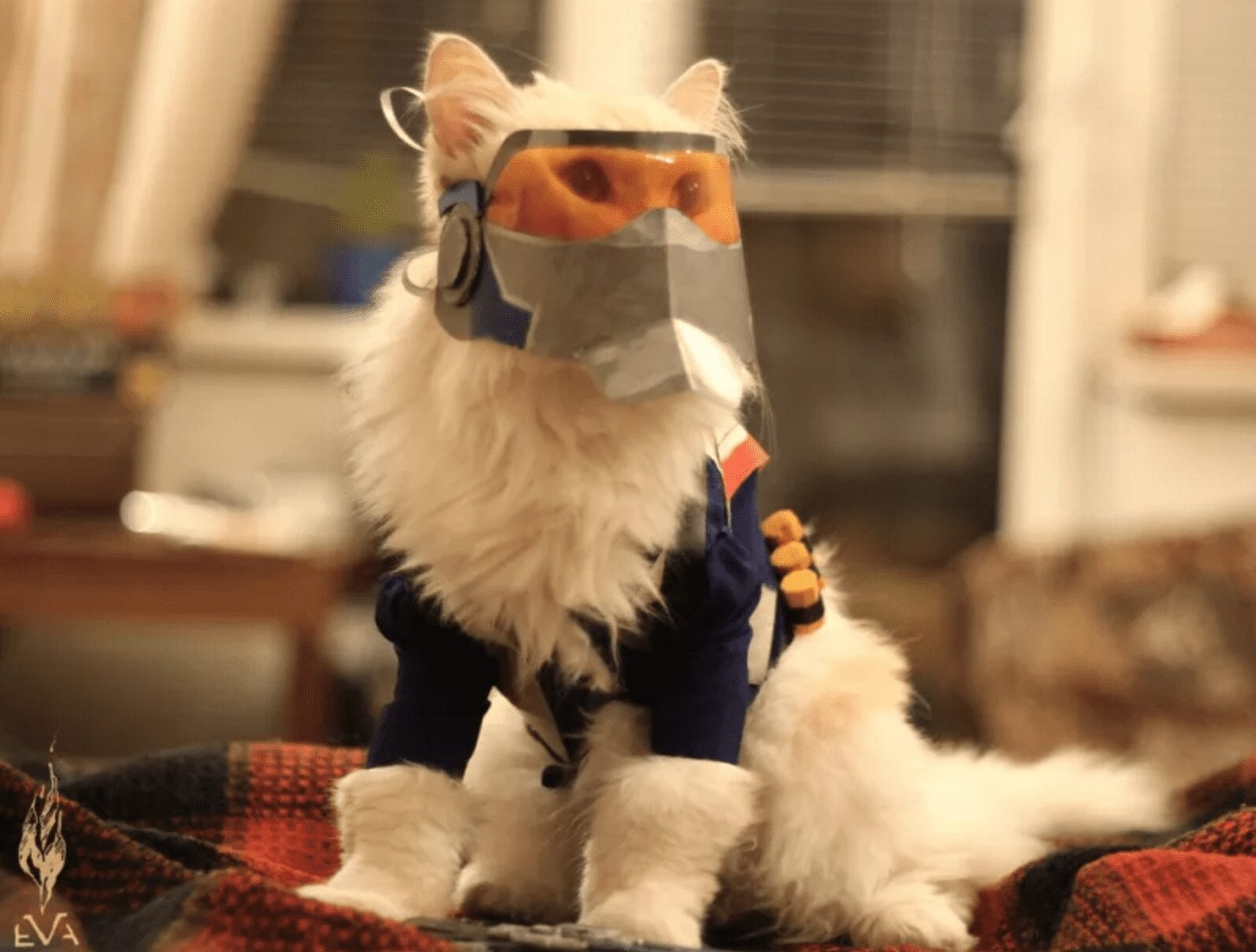 This kitty went for a more unusual look – a headpiece with a visor and an a coat. Bold style choice for sure, this Tracer-themed kitty isn’t quite up there when it comes to striking poses, but the fuzzy boots this pretty kitty has more than make up for this. 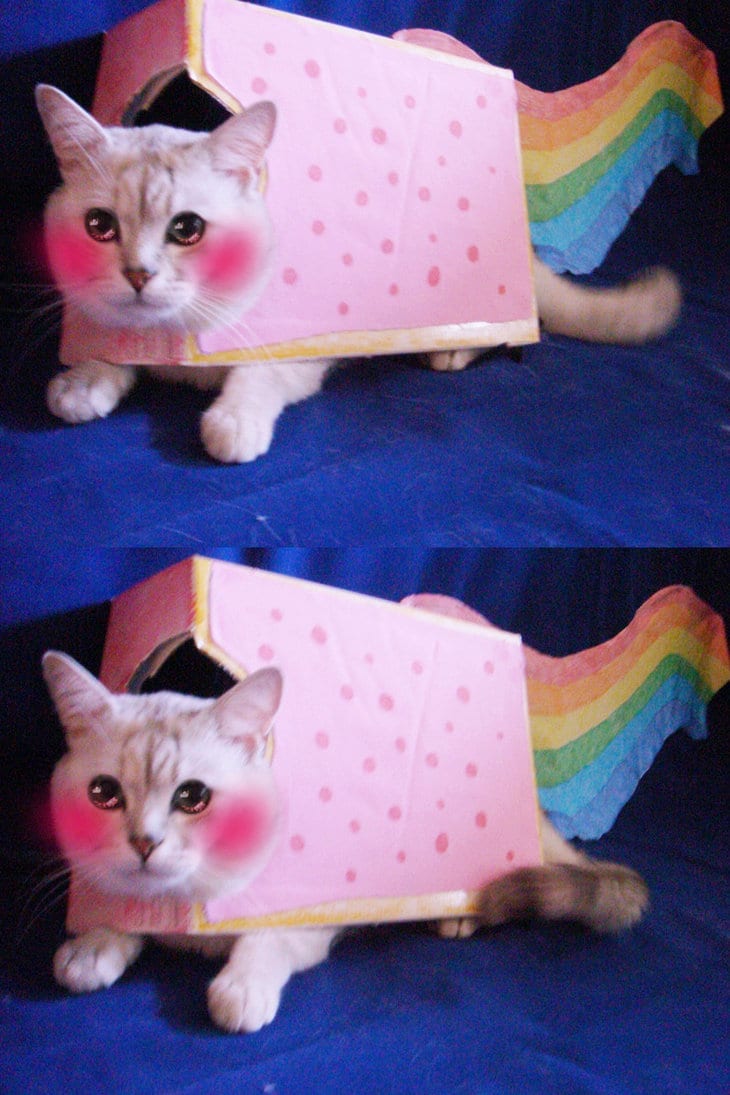 Okay, okay this cat has clearly had some work done – Photoshop work that is. You just don’t get that sort of hard angle and box shape naturally… we’re done joking now. Probably. Nyan-cat-cat is of course super-ironic and totally not 2006, no matter what anyone says. The cosplay itself is a little shabby, but the simplicity is actually very similar to the original 8bit cat, so Nyan-cat-cat definitely gets additional points for that! 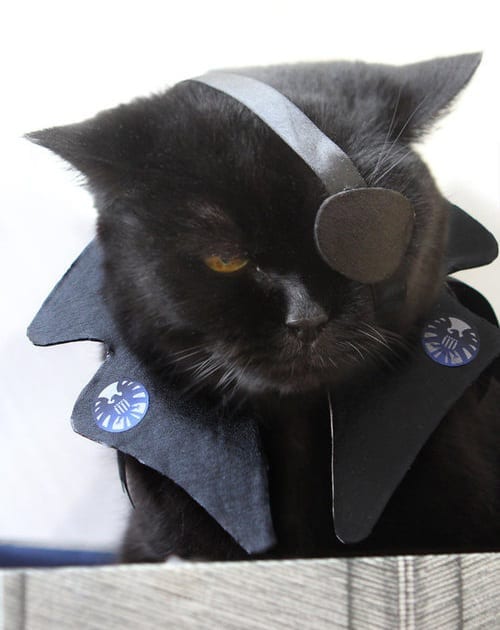 It’s always great when the animal’s personality matches the outfit the owners puts on. Nickitty Fury definitely has this down – he is not up for any of your crap and he is definitely going to get revenge for the stupid eye-patch, thank you very much.

Nickitty Fury looks like he is a little too old for whatever is about to go down and he would much rather kick back with a nice tub of tuna and watch Nyan-cat-cat do his thing but hey, what are you gonna do – the world isn’t gonna save itself. 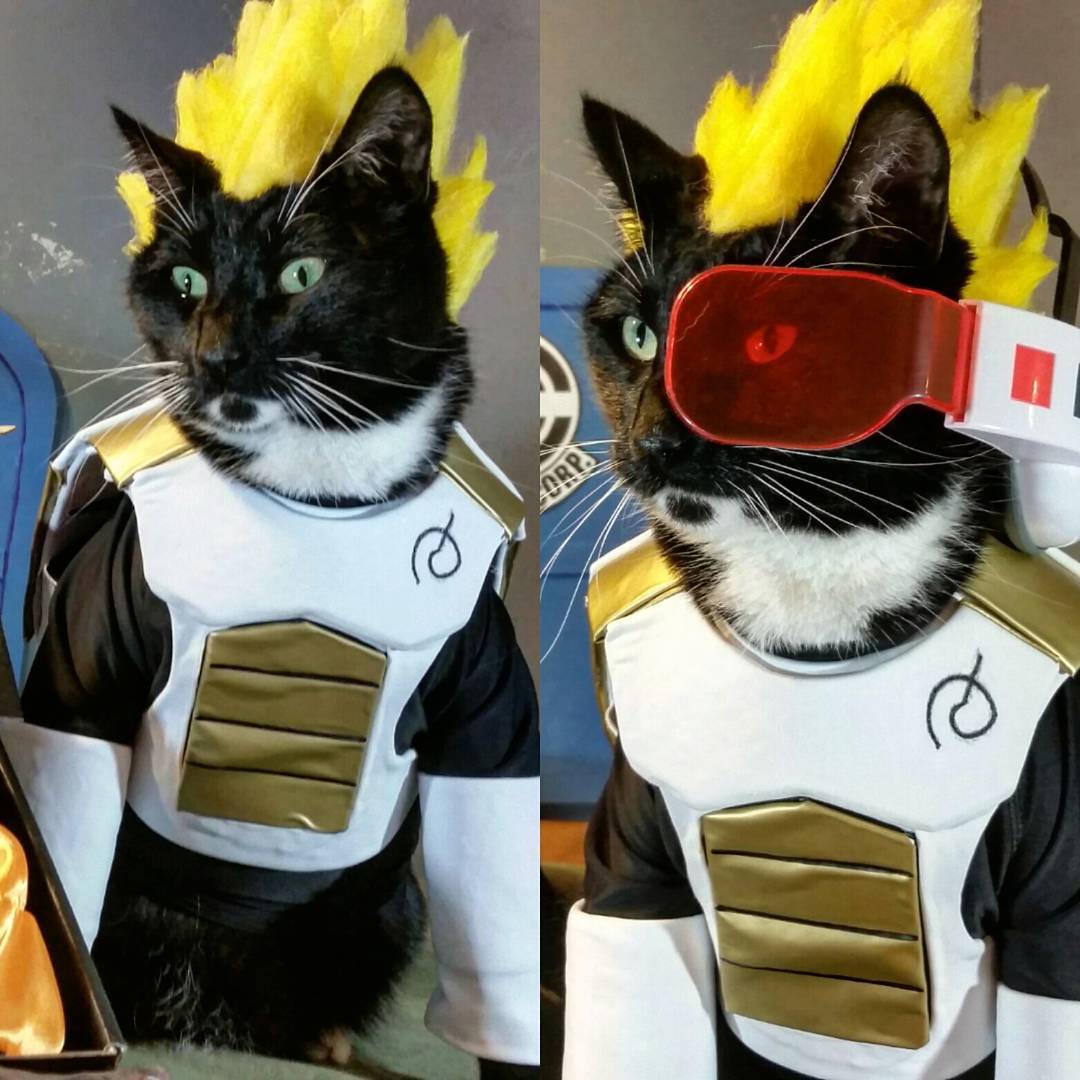 This cat is pretty impressive and it’s not even in its final form yet. Once again, an owner has done a bang-up job to not only get his cat into an outfit, but also to get that fancy hairdo on and then a visor on top of that.

Great attention to detail, we can practically feel the righteous power that fills this cat and lets it destroy its enemies with extreme prejudice! 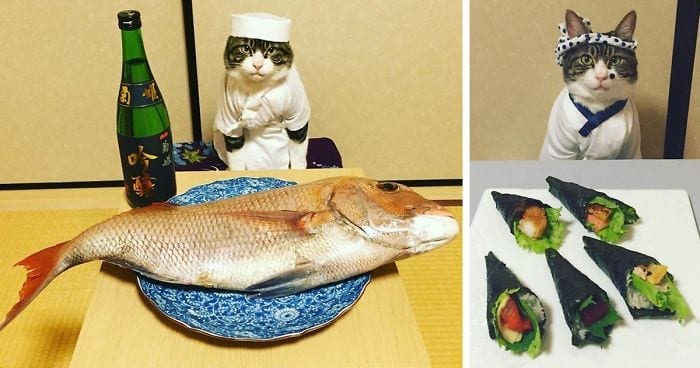 This cat isn’t cosplaying as a character from a game or show…but in a way, he’s more accomplished than any of the other cats on this list. Why? Well, not only does this owner clearly do this fairly frequently, but he somehow trained his cat not to go berserk on the giant fish in front of him. That’s more self-control than we have ever seen in a cat, and it deserves recognition.

Sushi-chef cat is just as impressive, leaving alone the tuna, salmon and butterfish sushi right in front of it. Honestly, we’re not even sure WE could have resisted that, so go Chef Cat! 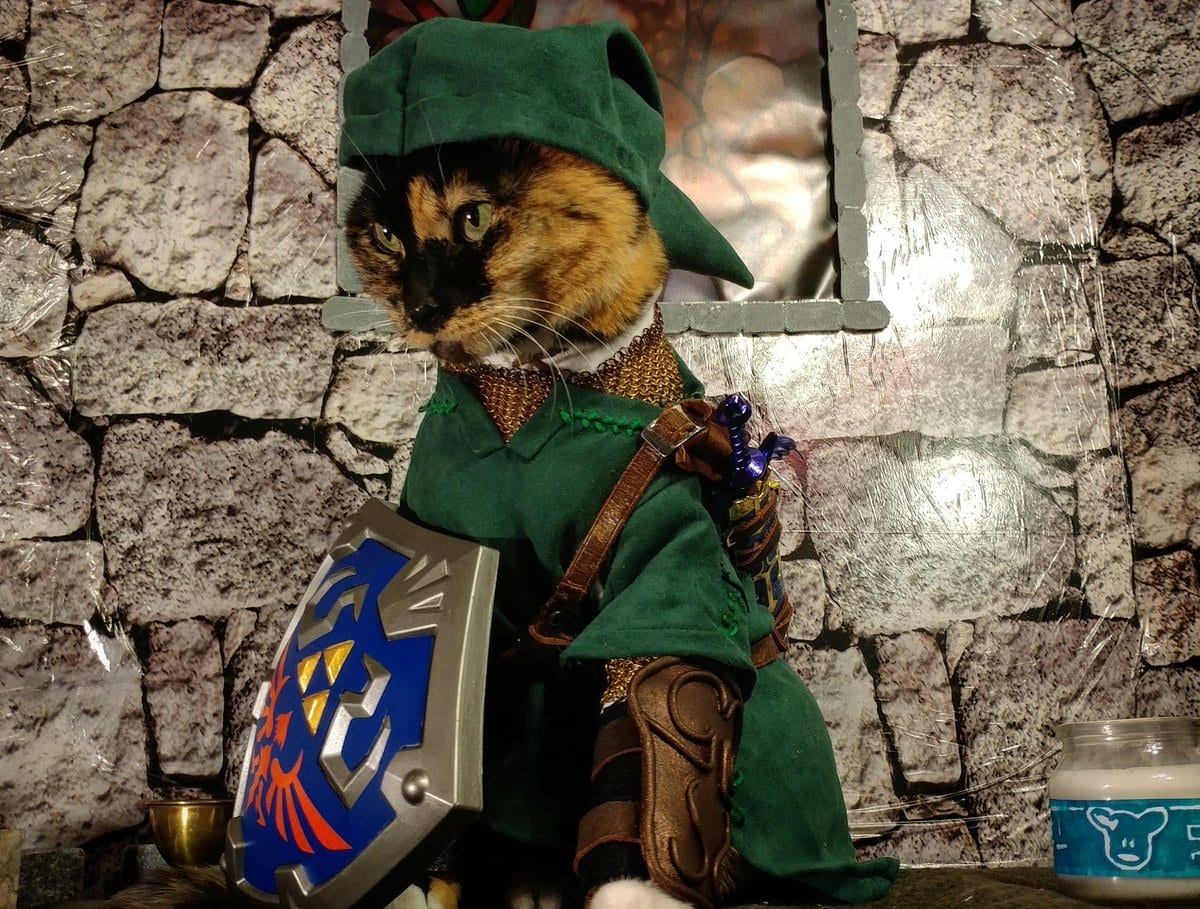 For those precious few who still don’t get this – Link is the name of the hero, Zelda is the name of the Princess he’s forever trying to rescue – unless he’s side-tracked by something else again of course. This Link has the determination and heroism we like to see in our game-heroes, and he’s kitted out well – clearly, the owner put some thought into this! 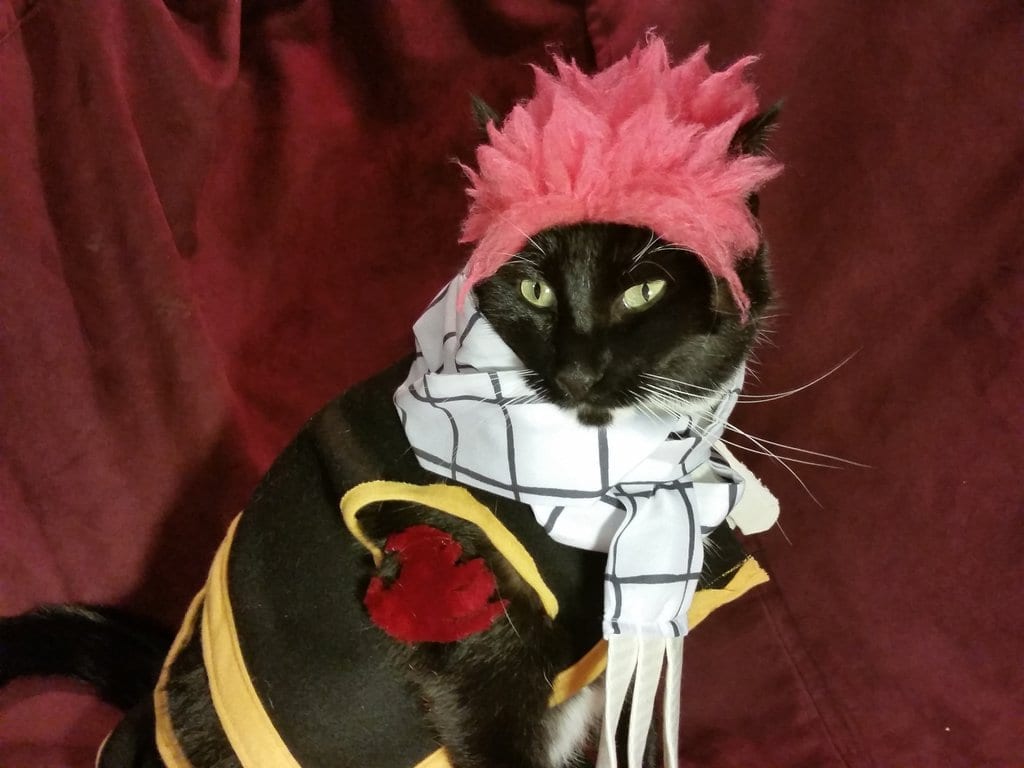 Another cat with a very impressive do – this little guy has the broody, determined look that a character from Fairy Tail, in this case Katsu Dragneel, needs. Fairy Tail is obviously the perfect choice for all kinds of furry puns, so we are going to spare you them. You’re welcome.