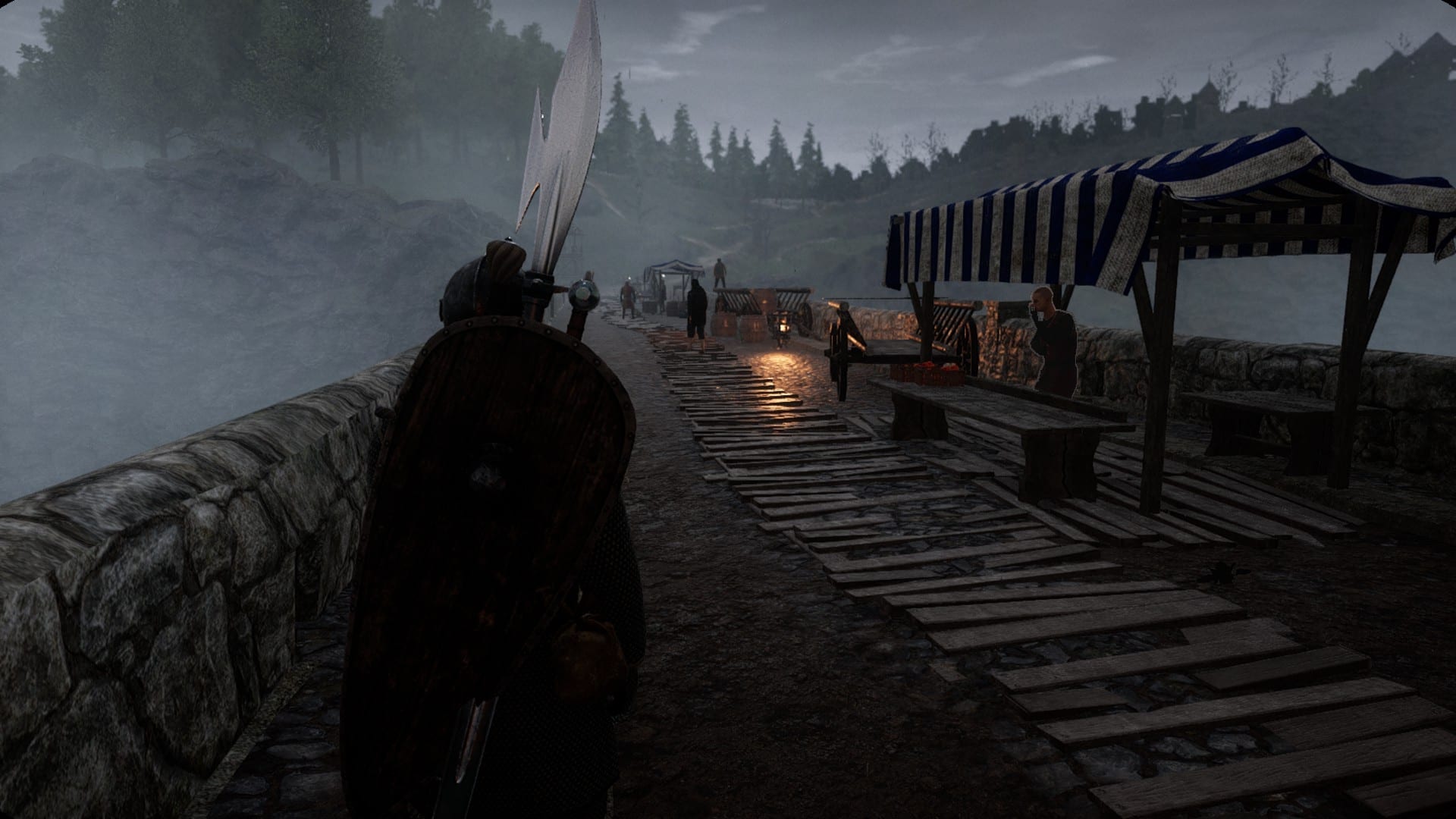 The Black Death is an Excellent Survival Game That Features Base Building, PVP & Meaningful Progression

The Black Death is a new survival game that takes inspiration from the middle ages and incorporates the deadly black death plague into the mix. It’s already been in early access for 2 years, but somehow it slipped under my radar until now.

It’s surprising I didn’t notice The Black Death sooner, because despite still being actively in development with new content updates regularly each month, the game in its current state hits the mark on so many areas that other survival games missed terribly with.

Imagine the base building mechanics seen in games like Rust and ARK, then add combat that’s somewhat similar to Mount & Blade. Then, add a skill system that actually has a very meaningful impact on gameplay.

Finally, add the black death, a plague that the developers are turning into a unique, evolving gameplay feature.

Should You Buy The Black Death? – Reasons To Pick It Up
ADVERT
ADVERT 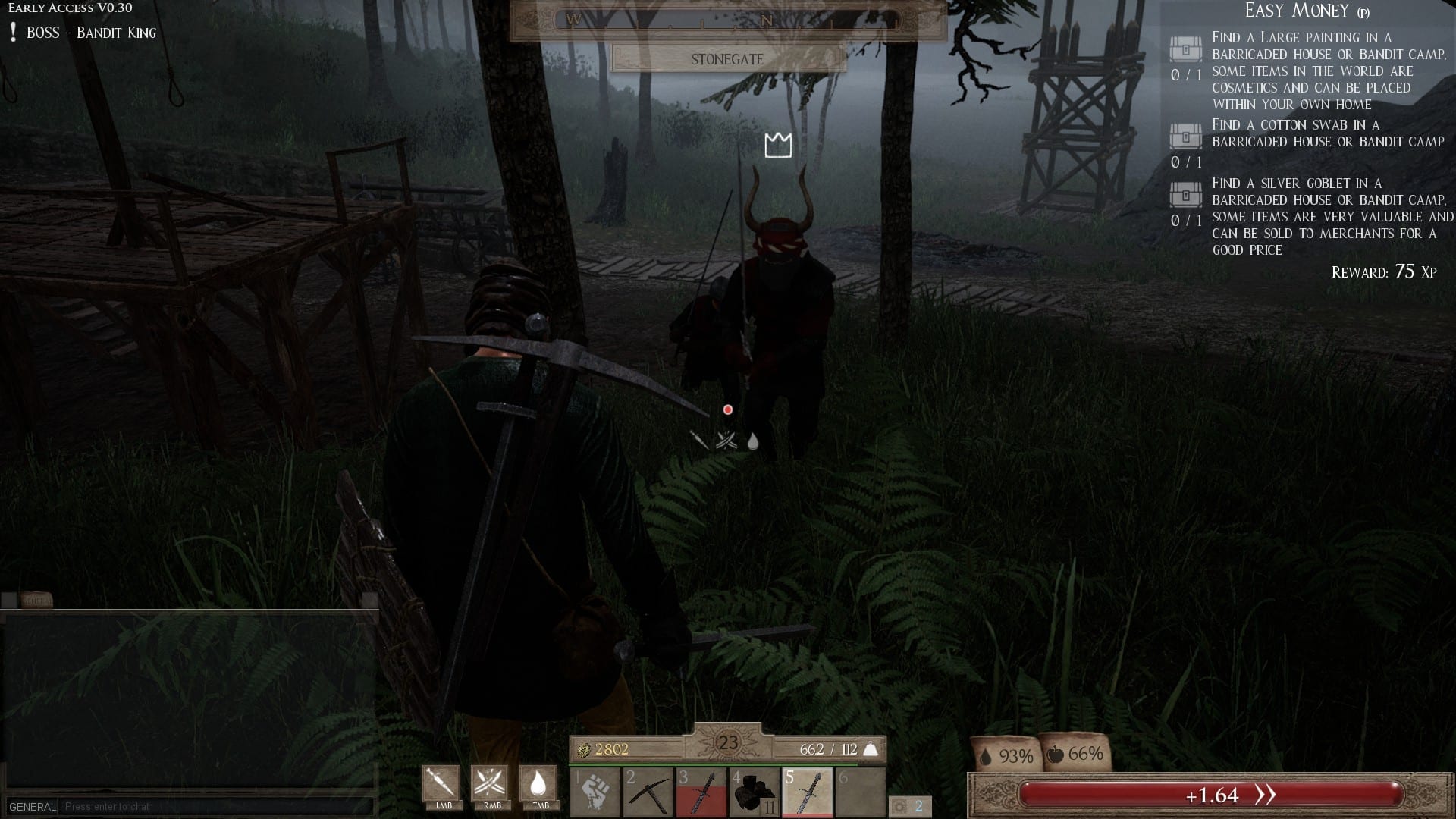 The Black Death pads out the overall resource gathering with a variety of meaningful gameplay elements. There’s also some great PVP elements, and surprisingly, good PVE, too, which is usually rare in these types of games.

Here’s an overview of what’s to like about The Black Death. 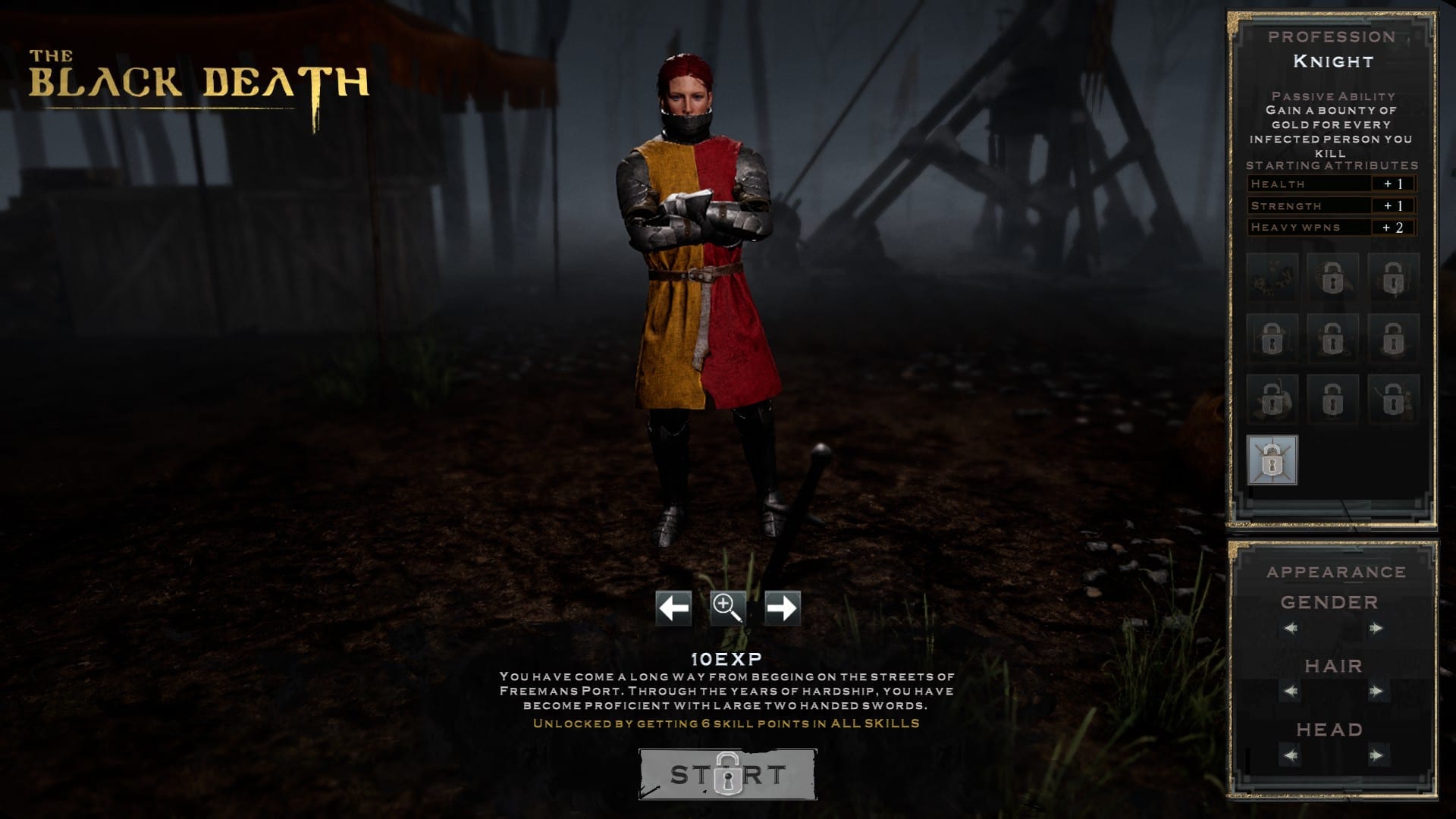 Here’s a quick overview of The Black Death’s progression

You earn experience for everything from collecting sticks to killing bandits and templars. You can then use this experience to progress through different classes. There’s medical, masonry, blacksmithing, banditry, survivalist, farming, cooking, artistry, and more.

It takes time and effort to level into the higher levels of each of these classes and it’s here where you’ll unlock better equipment or buildings to craft. Because of the huge diversity of skills, I found that it was good to get my friends involved and have everybody specialize in a different skill to begin with.

The Black Death ends up being a very social experience. You have to work with each other, or maybe even strangers on the server to build up the skills you need to build bases, weapons, and farms to be self-sufficient. 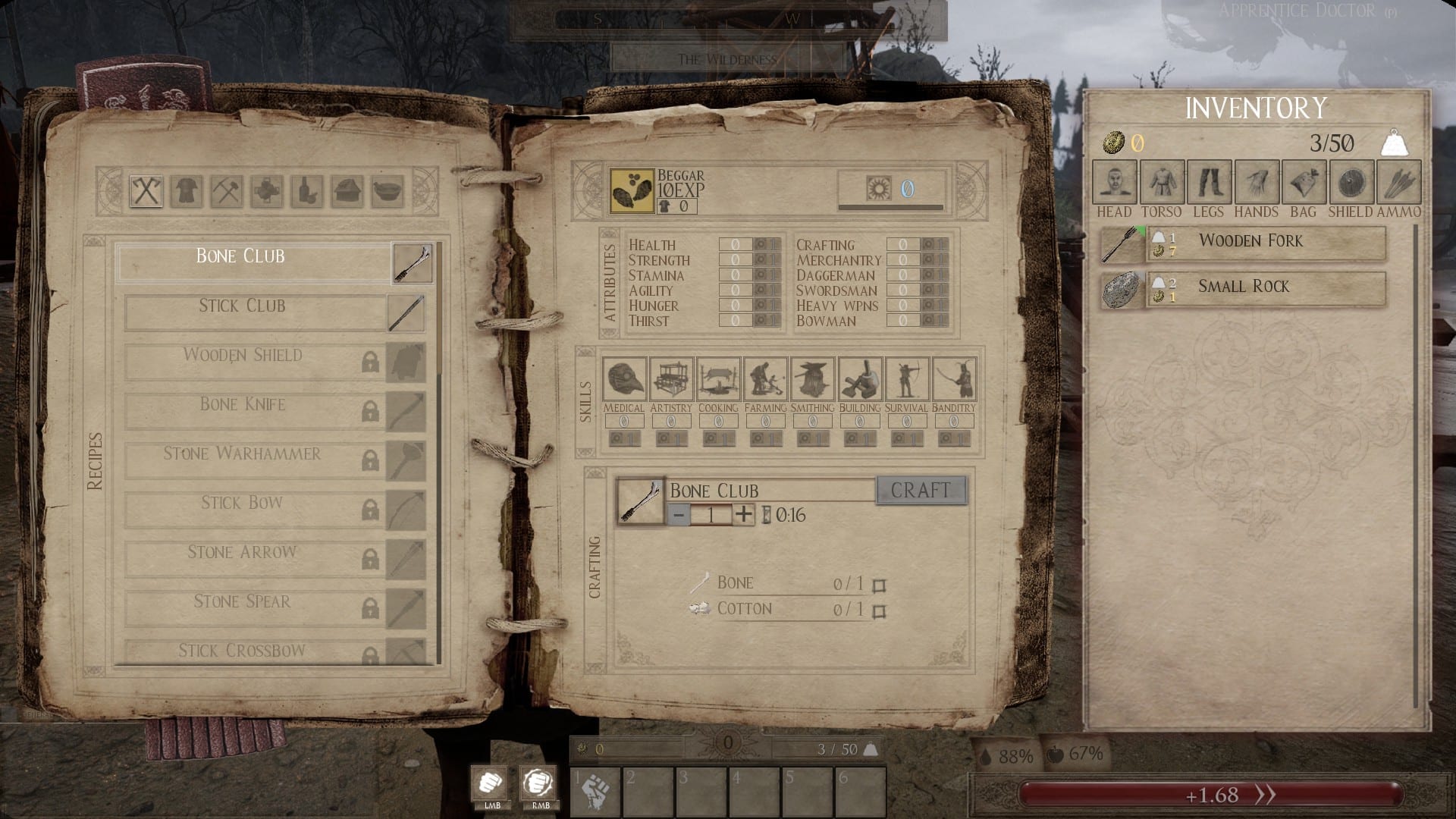 You can eventually level up all of your class skills on your own, so playing solo is still an option.

Eventually, leveling your skills becomes more difficult, but progression doesn’t stop there. You can then start to level up attributes such as health, stamina, strength, and crafting. Level these to get better stats and the ability to craft better materials.

There’s some risk to this, though. If you die, you lose your attributes. Your class skills, however, remain after death.

This puts a risk on death, even if you’ve locked all your good gear in your base. To make death even scarier, you get wages and experience for surviving each in-game day.

Survive more days and you’ll get increasingly more money and experience per day. If you die, you’ll lose those wages and will have to start from scratch.

Finally, if you reach level 5 in a respective class, you can then respawn as that class type, which will come with unique traits. The farmer, for example, gets extra resources when gathering. 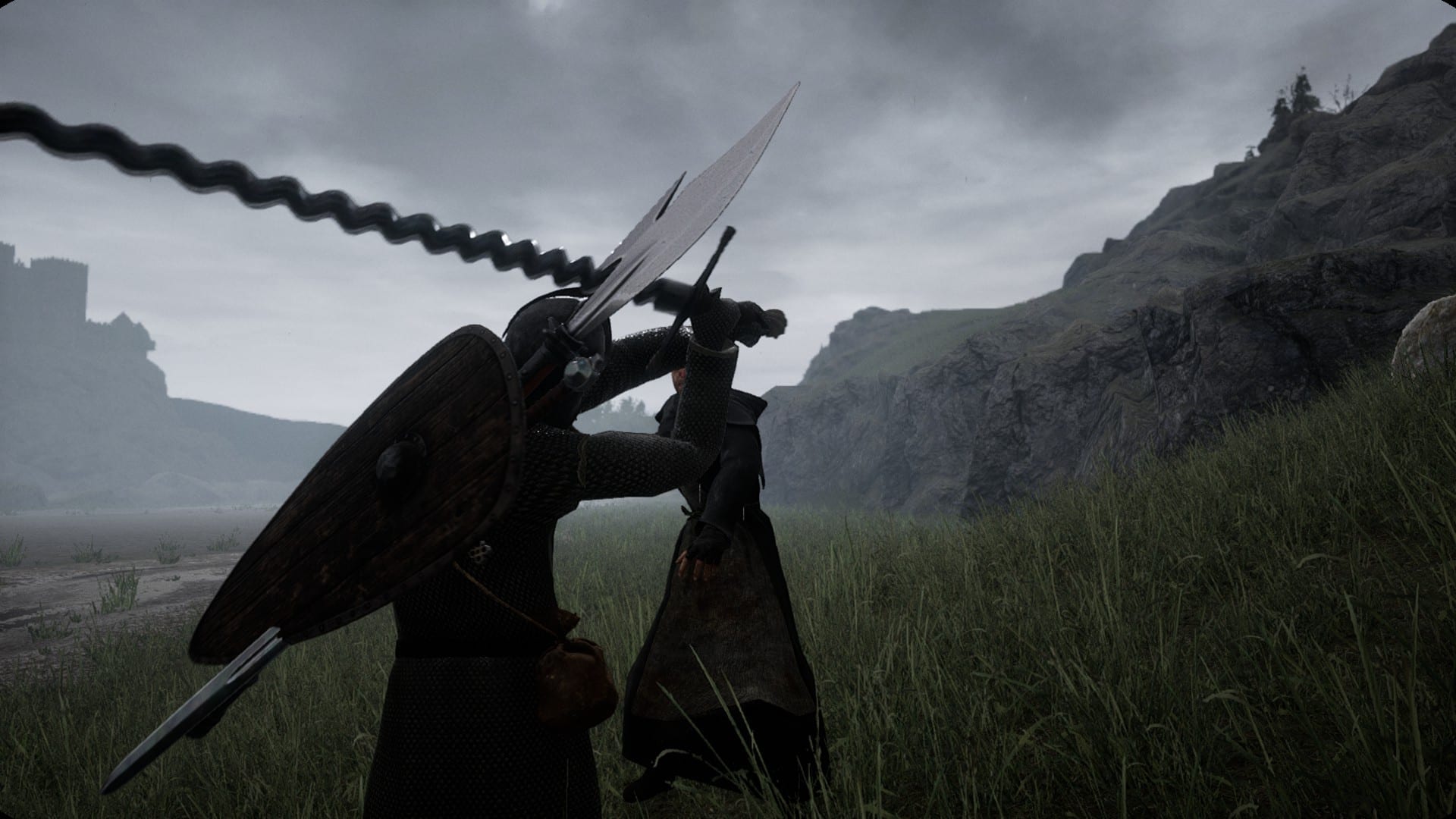 Base building is a core part of the Black Death experience. Like most survival games, you’ll start with the ability to craft a little shack and a campfire and will eventually progress to giant bases.

The more effort you put into gathering resources, the bigger and better your base will be. You can also complete PVE missions to get gold which can be used to purchase workers to automate gathering wood and stone. 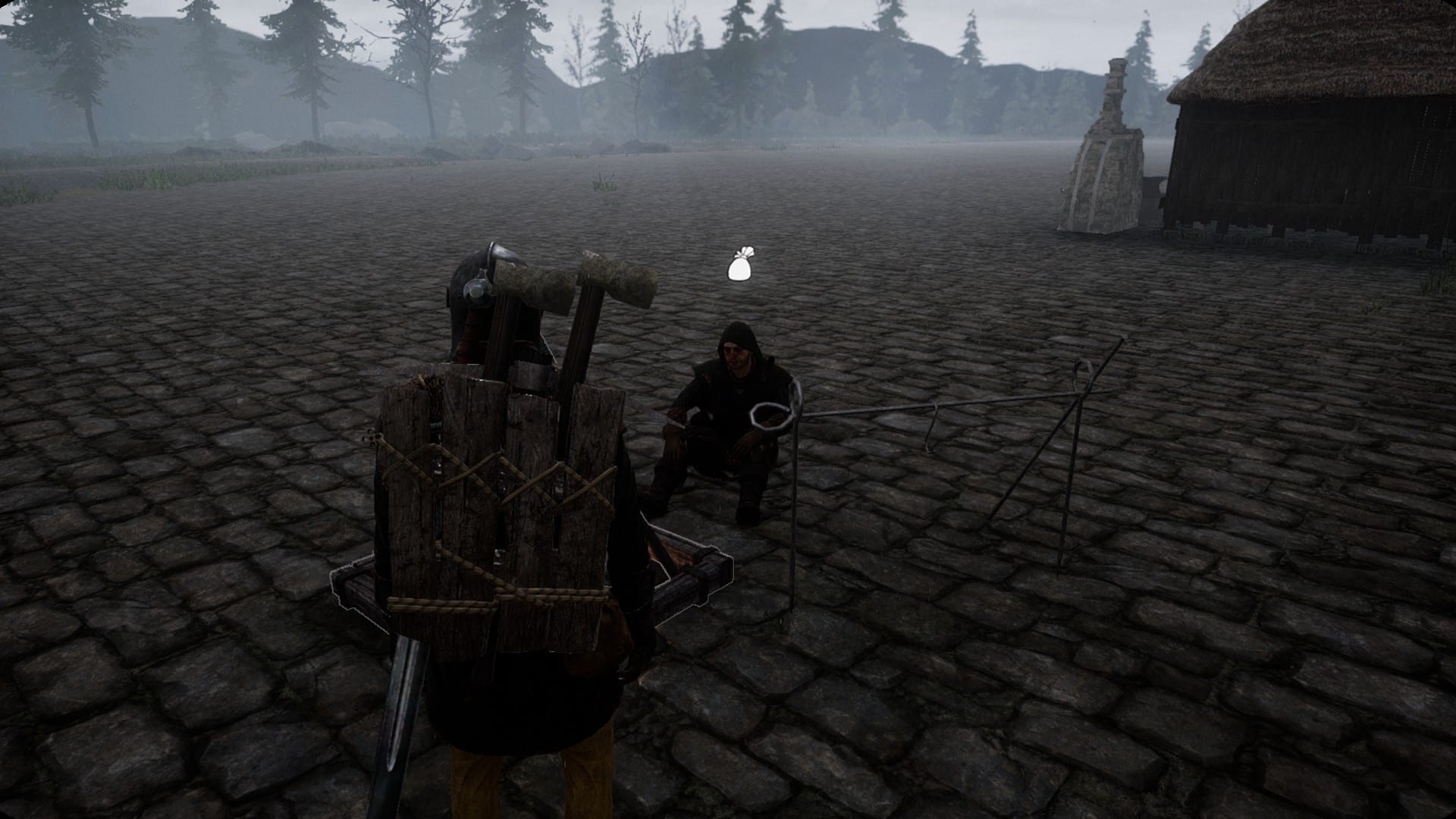 There are specific building areas on the map – these are large open flat spaces and you must purchase a land claim to build there. The concept of this feature is that there are limited spaces to build and guilds on each server should fight to get the best spots.

The map shows which guild is ‘winning’, which essentially means which guild has the most owned building spots on the map.

You can ‘declare war’ on other guilds, which is just a friendly way of saying ‘hey, we’re coming to blow your base up’. 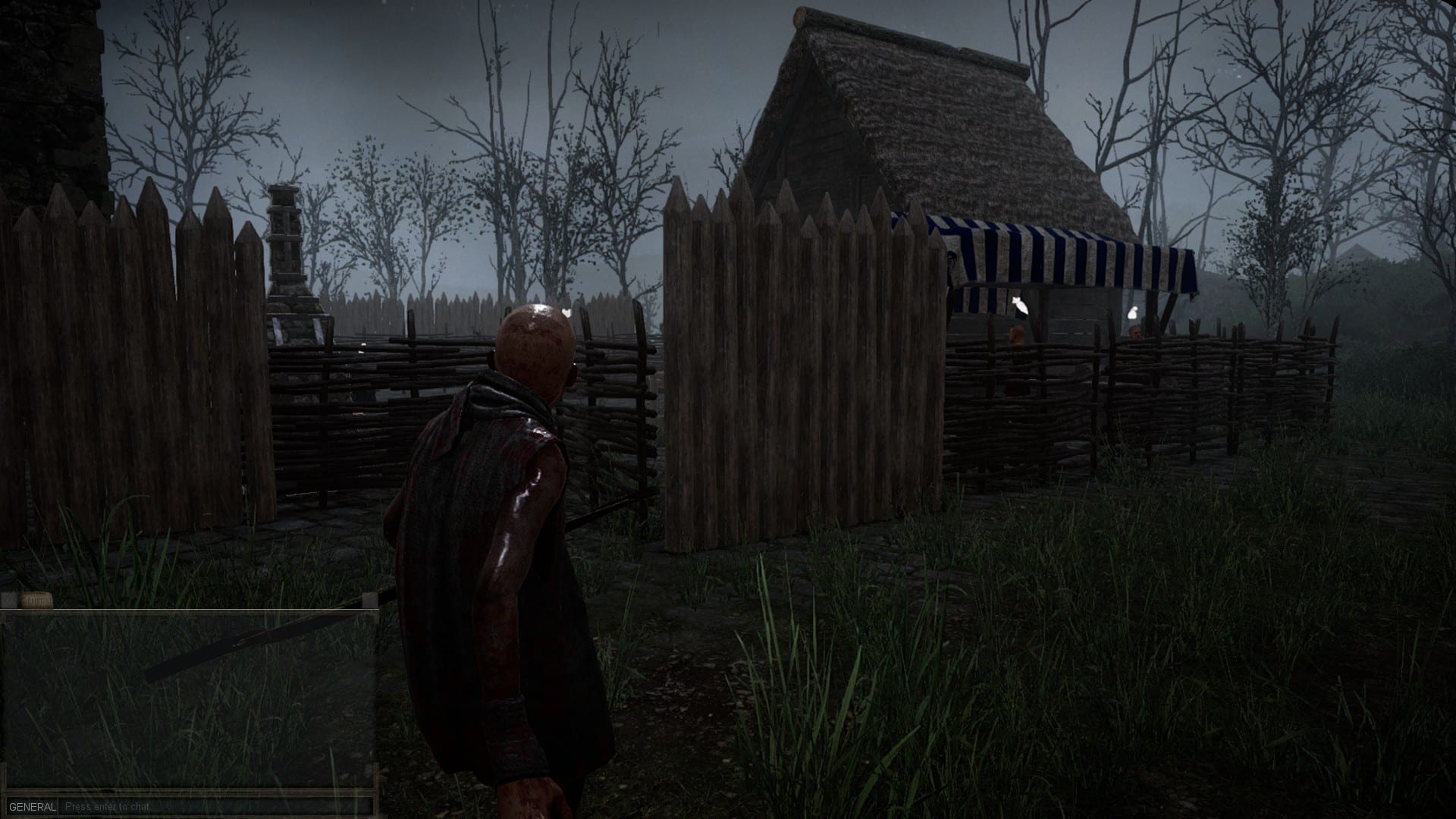 Thankfully, raiding in The Black Death is well balanced. For new players, it’s a little tricky because basic shacks and wood doors can be broken into with swords and a bit of time and effort.

Once you get past that and move onto wooden houses and reinforced doors, the only way a player is going to get in is through using siege equipment. Siege equipment is expensive to build and requires high level skills in both masonry and blacksmithing.

PVP and PVE in Black Death 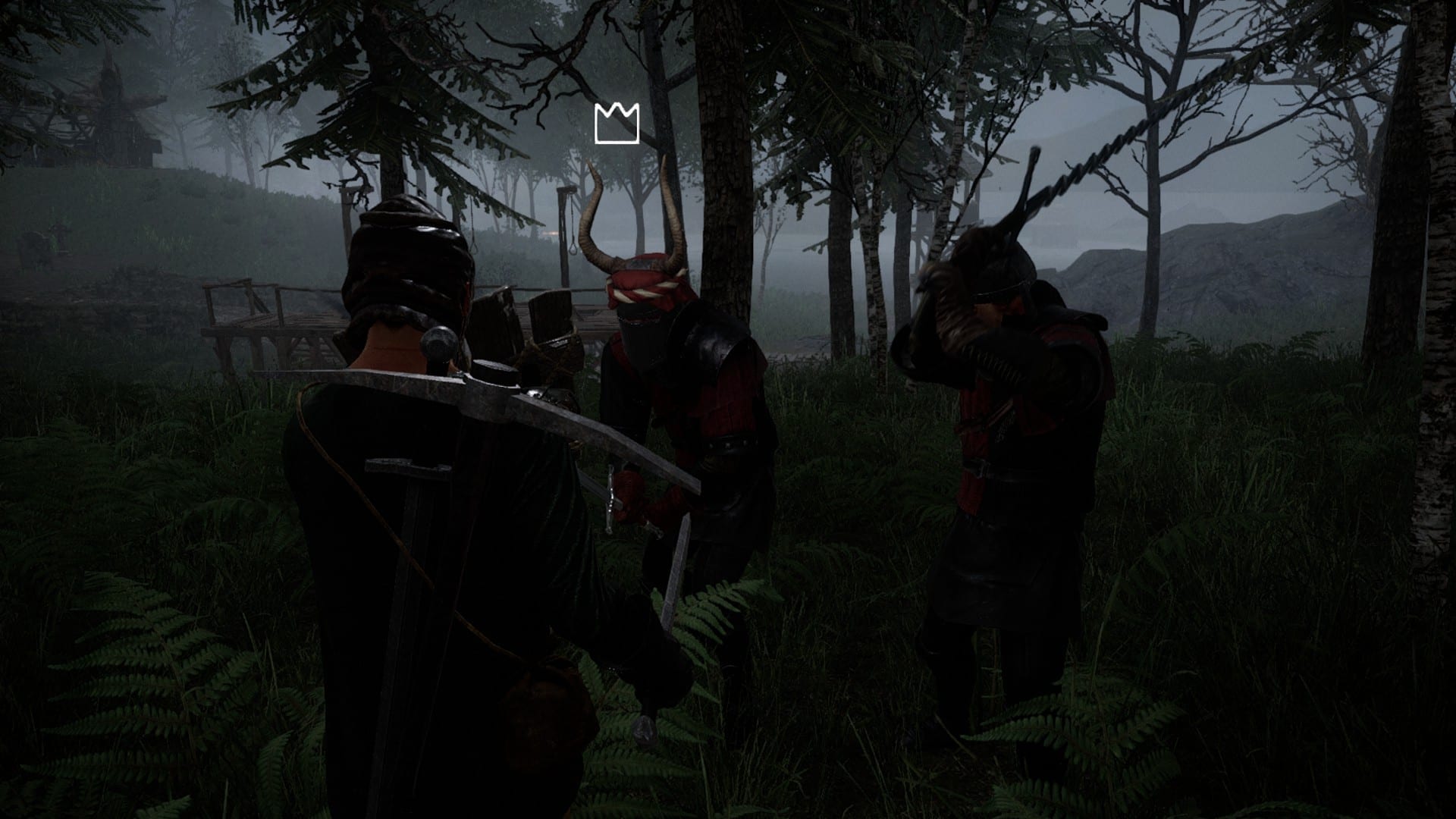 You’ll spend the majority of your encounters in The Black Death fighting against bandits. They are spread throughout the world and will attack anybody that gets close to them. From what I’ve found this is the most efficient way to gain experience.

There are also PVE missions that spawn periodically. These are just small areas marked on the map that have a crowd of tougher AI enemies and some kind of item reward in the middle of them all. When servers get populated, you’ll usually find other players fighting for the reward, so it can be a fun mix of PVE and PVP. 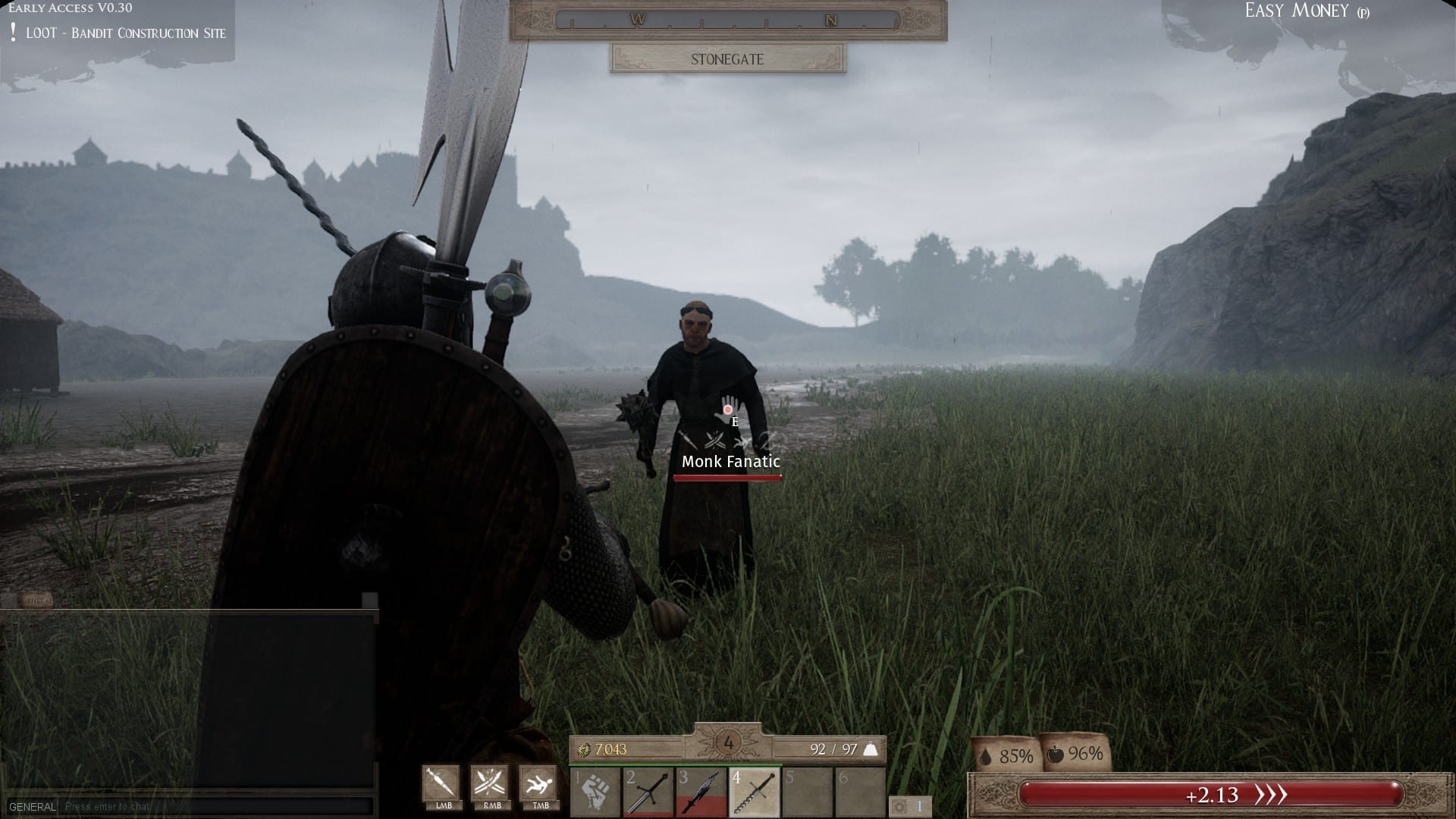 So, there’s a lot of PVP and PVE content involved, but how does it actually feel? It can do with some work, but in its current state it shows promise. Combat is as simple as if your sword hits another person, it’ll do damage.

As a result, PVP usually involves outplaying your opponent by moving to dodge hits, blocking, and timing heavy hits to stagger the other player. The actual combat feels very fluid, but there’s occasionally latency issues, so I’d highly suggest picking a server with the lowest ping possible.

It somewhat resembles the combat seen in Mount & Blade. There’s some skill to it and whilst owning heavy armor and better weapons will help, there’s nothing stopping a good player from taking down a geared enemy with just a bone club and wooden shield.

Should You Buy The Black Death? – Reasons To Pass On It 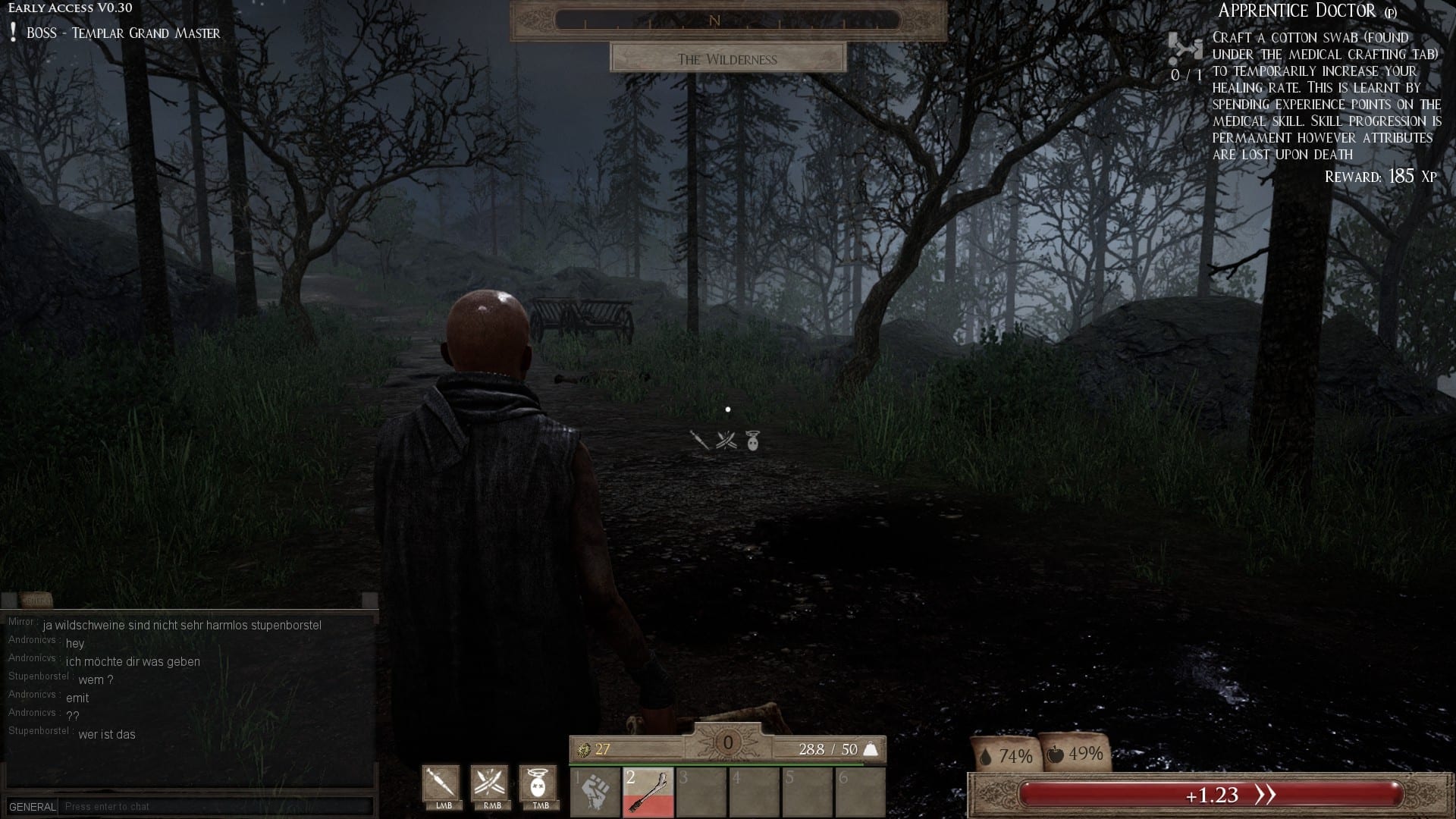 In my opinion, The Black Death is a great game and for such a cheap price, it shouldn’t be passed on. There are, however, some reasons that may make you want to pass on the game. I’ve highlighted each of these below.

What are your thoughts on the Black Death? If you’re looking for a cheap game to play to keep you occupied before Fallout 76, I think this is a good shout. You’ll easily get a few dozen hours of fun out of it.