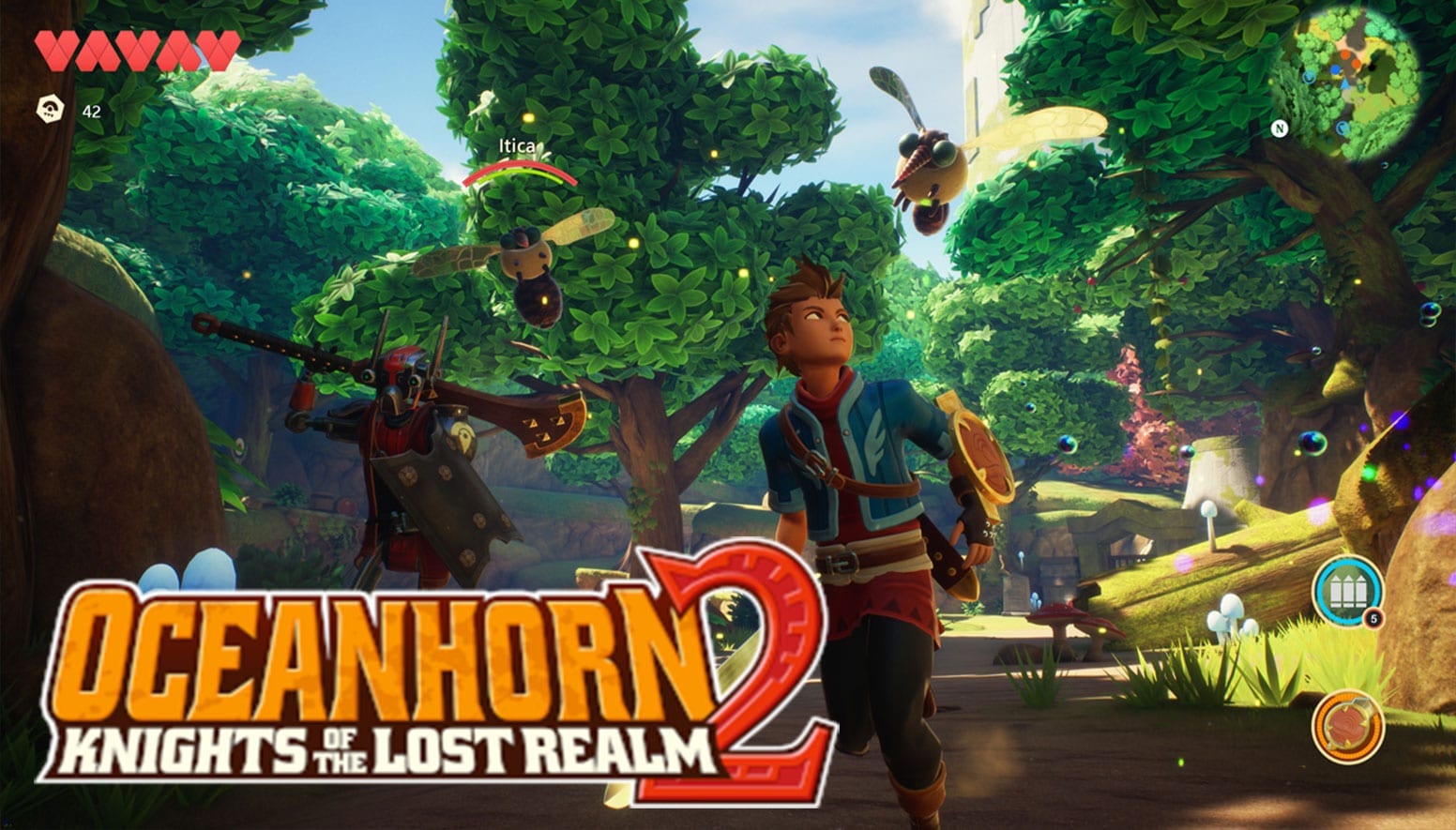 Oceanhorn 2: Knights of the Lost Realm has been one of the most enjoyable games I’ve played this year, and despite its relatively quiet release, it’s a game which definitely needs to be in your Nintendo Switch library. GameByte had the chance to speak with Tommaso De Benetti, Communications Director at Cornfox & Bros, to talk about the newly-released game and what fans can expect from the studio’s latest Switch launch.

Oceanhorn 2: Knights of the Lost Realm is the fresh new release from Cornfox & Bros, coming off the back of the 2013’s Oceanhorn: Monster of Uncharted Seas. This time around we’re treated to a prequel which takes place 1000 years before the first game in the series. Saving humankind in the bright, mythical and expansive world of Gaia, this is an adventure which definitely grabbed my attention from the get-go. With its solid combat, challenging puzzles, and its call-backs to RPG greats like The Legend of Zelda, Oceanhorn 2 definitely feels at home on Nintendo Switch after initially releasing on Apple Arcade in 2019.

“The Switch version of the game includes all the improvements and additional content we released on Apple Arcade,” explains De Benetti.  “The main quest will keep people busy for 15 to 20 hours: it will take our Hero from his humble beginnings as a Knight to become the only hope against Mesmeroth’s Dark Army.

“Players will get acquainted with Arcadia’s cities, villages, and characters, and both the Owrus and the Submerians, keepers of two of the Emblems. During the journey, the party will welcome new members, and Hero will discover that there’s plenty about Gaia’s history, the world where the adventure is set, that doesn’t appear in the official records. Players will also have plenty of side things to do, like collecting Bloodstones, the Knight’s Order Daggers, bring to justice rogue minibosses, and explore optional dungeons. We think it’s a great package!”

The original Oceanhorn game amassed a lot of love from players, and still boasts a Steam user rating of 9/10. When asked to describe each of the two games in just three words, De Benetti says Monster of Uncharted Seas is “1000 years later,” while Knights of the Lost Realm is more of a “All begins here” game. With such big shoes to fill, we wanted to know if there were any challenges in creating the sequel.

“In a way, we decided on the challenges ourselves,” explains De Benetti. “We could have done the easy thing and do a sequel with the same engine and more or less the same format, but we changed completely the way the game is played, moving from an isometric view to a full third-person 3D environment.

“That meant rethinking all interactions in the game, from combat to moving on the map, etc. We also changed the engine in the process, as Oceanhorn 2 was developed on Unreal 4, while the first one was an in-house engine.”

The Oceanhorn series has often been compared to Zelda games both in its style and gameplay. Where the first game was more reminiscent of early Zelda titles, Oceanhorn 2 feels distinctly more Breath of the Wild-like. We wanted to know how it feels to have your game compared to such a series.

“It’s one of our favorite series of all time, and I think I can speak for the whole team,” says De Benetti. “In our blog, we went over a few titles that have inspired Oceanhorn, and things don’t start and end with Zelda.

“That said, we believe that hasty comparisons leave out a lot of unique elements we’re offering with Oceanhorn 2: Knights of the Lost Realm, such as the party system, more emphasis on the lore, XPs, gunplay, and more that we think people will discover by themselves.”

Speaking of new features in the game, Oceanhorn 2 is packed full of new mechanics and gameplay elements missing from the first title, and they’re a very welcome addition to the game world.

“We wanted to provide players with new ways to discover Arcadia, and one of the main reasons for switching to a 3rd person gameplay was to get the camera closer to the game world,” says De Benetti.

“In Oceanhorn 2, you can explore the world by crawling under the houses or inside dead tree trunks, or go and explore the world under the waves in numerous locations by equipping the diving helmet. There are plenty of treasures and collectibles to be found!”

It’s not just the new mechanics that make the world feel more alive than ever before – a lot of it comes down to the upgrade to Unreal Engine 4.

“It took us a while to get going with Unreal, coming from our proprietary engine, and the technical challenges were plenty, but we conquered them all,” says De Benetti on the graphical upheaval of Oceanhorn 2. “You can read more about the specific port on Switch on the Unreal blog (it gets very technical).”

Speaking of the new gameplay, De Benetti teases the potential of perhaps a fully underwater game next, saying: “One implementation we were incredibly proud of was the first person mode players switch to when underwater. It was the last thing we added to the game, and it feels very natural. It gives us ideas, you know ;)!”

Making a game with such a devoted fanbase comes with many pitfalls, one of which is taking player feedback into account. Finding the line between giving players what they want while still preserving your original vision is hard – especially when you consider the technical limitations of game development. We wanted to know how the Oceanhorn games are influenced by their players.

“We always read feedback and take it into account,” says De Benetti. “Sometimes we get some suggestions that are hard to implement, or that would completely break the way the game works, and those cases are not always obvious from the outside. Whenever possible, though, we make notes of what fans ask and either develop new content in that direction or make notes for the upcoming projects. Sometimes it makes more sense to say, ‘we can have this in the next game.’”

Speaking of “the next game,” we couldn’t help but ask what Cornfox & Bros has up its sleeve for the future of the Oceanhorn series…and it’s sounding pretty hopeful!

“I’m under an oath of secrecy, but there is plenty of mythology to be covered. Make of that what you will!” teases De Benetti.

Oceanhorn 2: Knights of the Lost Realm is out now on Nintendo Switch. Check out our review of the game right here!