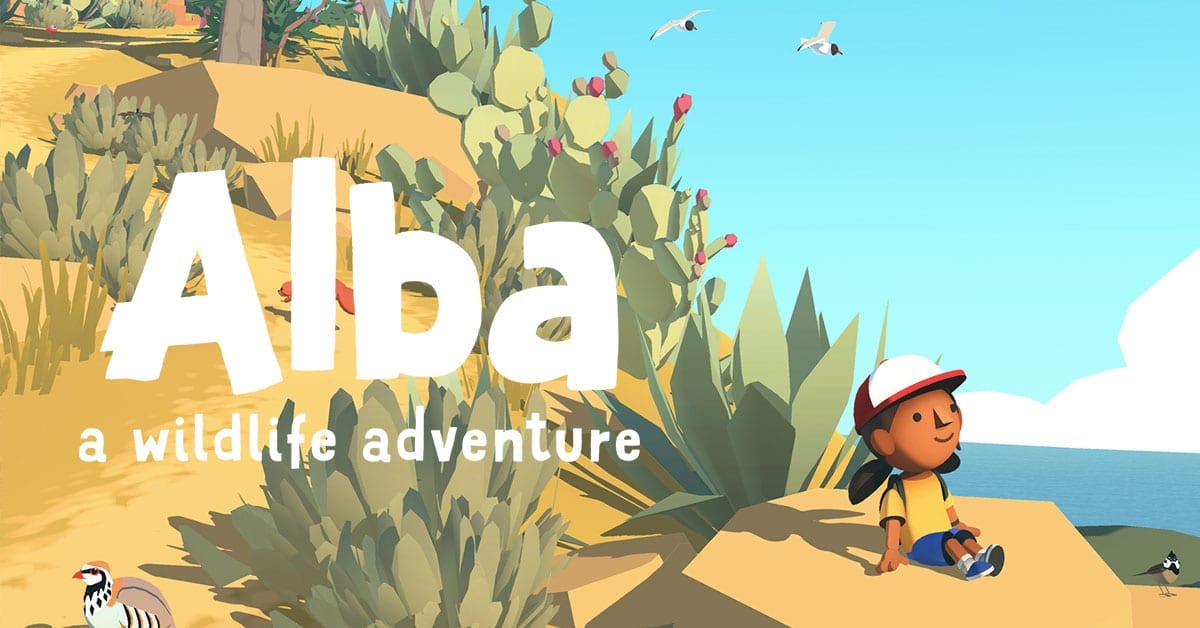 The recently-released Alba: A Wildlife Adventure has received high praise for its relaxing and inviting approach to game design and narrative. A title created with visions of peace, tranquility and a whole load of animals in mind, Alba: A Wildlife Adventure has already inspired countless gamers since it launched on PC earlier this year. GameByte spoke with Creative Director David Fernández Huerta and Lead Programmer Manesh Mistry to find out more about Alba and its development.

For those who aren’t familiar with the new release, Alba is a game which transports the player to a Mediterranean island where they must explore and photograph local wildlife in order to aid both the animals and their environment. A title very much designed to inspire nostalgia and childlike wonder, Alba: A Wildlife Adventure is the perfect game to whisk you away to a happier place.

We wanted to know what games inspired the development team at ustwo games throughout the creation of Alba.

“Many games,” laughs Lead Programmer and Director of Alba, David Fernández Huerta. “Manesh was playing the original The Legend of Zelda in the studio a while ago, and that was about the time when I thought ‘this bird photography game idea, this could be like a Zelda game!’ I think the first time I thought of a game about bird photography was playing Diablo 3.”

“A bunch of us had been playing Breath of the Wild, and so that definitely has been one we talked about a lot,” says Lead Programmer Manesh Mistry. “But we went back to play the original Legend of Zelda  and just saw how much of the original design was present in that game and how you could strip back so many things and have the core of the game still be exact. That was something we thought about: what can you strip back that still maintains the core of whatever the idea is.”

Much of Alba’s world has been inspired by the childhood homes of a number of the game’s developers, especially David’s. Even for those members of the team who grew up in the UK (where ustwo games is located), there still seems to be a sense of nostalgia and wonder associated with the world which has been so carefully curated for Alba.

“The authenticity comes across right from the beginning,” says Manesh. “I haven’t been to these parts [of the world] before, but I get the feeling of nostalgia. I haven’t been there, so why do I feel nostalgic?

“The authenticity hits you so deep – and that’s what I feel we’ve been aiming to achieve. Part of it is drawing upon your experience, but part of it is the diligence of team members saying ‘right, i’m going to walk around Google Street View and make sure I capture the important things about this, without needing to go photorealistic.’ There’s a lot you can convey through solid art direction and focusing on the right details.”

Working on a new IP always comes with its own set of challenges to overcome, and we wanted to know what difficulties Alba faced on its journey to release.

“The technology behind creating an open world, with a game that is multi-platform [was a challenge],” explains David. “We want the game to feel the same and be as good on every platform, and we come from a mobile background, so it’s very important to us that a mobile platform is as good as the consoles and desktop.”

As always, a new IP has to appeal to the fans – something which is arguably harder to achieve in slower-paced exploration games.

“We try to take risks in the games that we make and if it turns out that people really do like this chill, take-pictures-of-animals, spend some time with nature thing, that feels like ‘okay, if we like it, hopefully that inspires other people to make games that are more about nature, more about being in touch with the world around you,’” says Manesh. “That’s not to say there’s anything wrong with violent games, we enjoy that kind of stuff too, it’s not that we don’t want to have those games exist in the world! We just think there’s also room for games like this too.”

Those weren’t the only challenges faced by the team though, as creating an open world in which the main aim is taking photos posed a problem in itself. How does a player measure their success when the game is as open-ended and freeing as Alba is?

“We don’t make violent games and there is a reason why people have combat in their games – because it works!” laughs David. “It’s really easy to understand, it’s fun, it’s easy to measure your success. But when you want to create an open-ended adventure like ours, without such black-and-white ‘wind conditions,’ we have to really explore what players can do, what players are feeling at every moment and try to give them something to do without it being the typical thing.”

With accessibility becoming a more and more important part of game design, we wanted to know how ustwo games approached accessibility to make Alba playable for as many gamers as possible.

“Our overall approach is that we want our games to exclude as few people as possible, to be as inclusive as we possibly can for anyone to be able to pick it up and play it,” David tells us. “We certainly think about the readability of certain animals. We’ve gone for a slightly more realistic animal silhouette, and we talked about things like trying to make them easier to look at for someone who’s colourblind for example, or people with vision impairments.

“Touchscreen controls give you more opportunities to play with accessibility in the sense of how you lay out the controls on screen – where is this button, how long does it take to press this button, how often do you press that button? Can you play one-handed? Do you need to play two-handed? We’ve considered those things.”

Sound design has also been implemented to enable as wide an audience as possible, something which was quite important for the primarily mobile developer.

“Coming from a mobile background, we’re kind of used to the fact that we have to make a game that can be played without sound,” explains Manesh. “Every kind of mechanic or puzzle in this game, none of it requires sound to interact with it. For things where it’s important that a sound happens behind the player, we’ll show something on the screen, and it doesn’t feel like [we’re compensating] it feels like ‘oh that’s a cool visualisation to show that an animal called behind me.’ It’s making sure that nobody feels like they’re getting an inferior experience because they either aren’t playing with sound or they can’t play with sound.”

Alba: A Wildlife Adventure doesn’t just want to make players feel welcome through its controls though, as it also aims to represent people of colour and people of different cultures.

“On a creative level, we’ve made sure we have a very diverse cast of characters so that everyone can feel…not necessarily represented themselves, but that they see people that are real people from the real world, and there’s a variety of people there,” says Manesh. “We live in London, we can’t make a game that’s not diverse and be happy about it!”

Seeing such a wonderful reception to Alba has been a joy for the team, but their own personal successes and pride go much deeper than that. We wanted to know what the duo’s stand-out personal achievements are with Alba.

“As you go through development and the game is changing and evolving, you get worried – ‘are we going to achieve what we originally aimed to?’” says Manesh. “And for me, the biggest thing is that I think we did. I’ll play the game now and think ‘This is what we set out to make,’ and it makes me feel really proud that we actually managed to do that.”

For David, Alba: A Wildlife Adventure is a personal story on many levels, which means he’s proud of the release for a myriad of different reasons.

“I think for me it’s a game that’s very personal to me; some of the characters are modelled after members of my family. It’s the landscapes of my childhood,” says David. “It also has a very clear message in the sense of ‘this is what we stand for.’

“I’ve always believed that games can be a force for positive change in the world, and I feel really proud [of Alba]. I can be 100% sure that I can show this game to anyone and not be embarrassed about any of it. This is what I believe, and this is what I believe games can do. And it’s a bit meta, it’s not necessarily something that’s in the game, but to me it’s what the game represents.”

Alba: A Wildlife Adventure doesn’t just aim to challenge the expectation of what a video game should be, but it also works to make our own real world a little better too. Developer ustwo games has partnered with climate change pioneers Ecologi and Count Us In to improve our planet with the help of Alba. We wanted to know more about what that partnership looks like, and what the aim is.

“Count Us In is an initiative from UN Life, which is a branch of the UN that has a focus on encouraging young people to be in touch with nature, ecology and saving the planet,” explains David. “They have a few actions that they recommend people do, like cycling to work for example.

“What we’ve made is a page on their platform, and we’ve [tweaked] their 16 actions, adding a couple of our own that feel like they go with the spirit of Alba. Through social media we’re going to be inviting people to join and do their bit and have a concrete way of taking action in the world, as you do as the character in the game.

“With Ecologi, we have a pledge of planting one tree per copy of Alba that we sell (or for each unique player on Apple Arcade), so we’re going to make an initial contribution of 100,000 trees ourselves as a company. Then for every new user we’ll add one tree. We have a goal to plant one million trees – hopefully we’ll achieve it!!”

Alba is well on its way to achieving its goal, with over 250,000 trees planted at the time of writing. You can find out more about Alba’s Forest and Ecologi right here.

If you’re looking for a relaxing and inspiring adventure, Alba: A Wildlife Adventure might just be the game for you. Check out our review here!

Alba: A Wildlife Adventure is out now on PC and Apple Arcade. The game will be heading to Nintendo Switch in 2021.