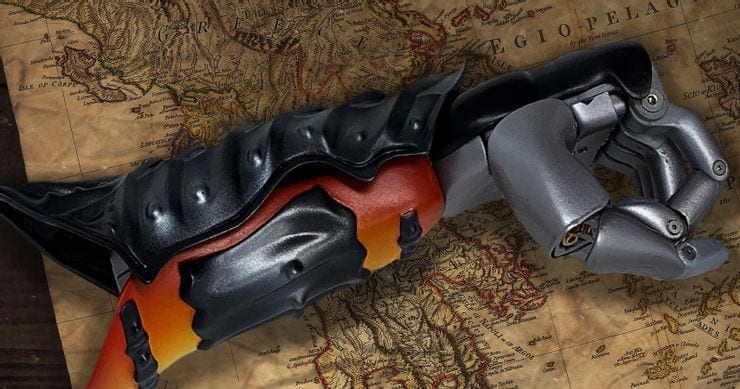 In collaboration with Ubisoft, Limbitless Solutions is developing a special Assassin’s Creed Odyssey prosthetic arm sleeve inspired by one of the game’s heroes.

You may remember back in November the story regarding the amazing Metal Gear Solid prosthetic arm created in collaboration with Open Bionics and Konami.

The Assassin’s Creed Odyssey prosthetic arm is inspired by the one of two playable protagonists in the game, Kassandra, and the prosthetic arm will be created for both adults and children.

I won’t give any spoilers away for 2018’s Assassin’s Creed Odyssey just in case you haven’t played it, but Hades is a god that original God of War fans should be very familiar with.

In a press release from the brilliantly-named company Limbitless Solutions, talented designer of the prosthetic arm sleeve Remy Marasa said that she wanted to: “bring a design that connects the game experience into real-life“.

The growing trend of video game prosthetic arms is one that I hope continues to expand as more publishers jump onboard.

We’ve already had the brilliant prosthetic arm inspired by Venom Snake’s arm in Metal Gear Solid V: The Phantom Pain and now the Assassin’s Creed Odyssey arm inspired by the Bracers of the Underworld.

This is not Limbitless Solutions’ first venture into developing prosthetic arms based upon video games as they’ve already begun development of an arm inspired by Cyberpunk 2077 character Johnny Silverhand, played by the ‘breathtaking’ Keanu Reeves.

I think it’s only a matter of time until we get something inspired from the N7 armour of the Mass Effect series!

What further video game and prosthetics collaborations would you like to see in the future? Let us know across our social media channels.