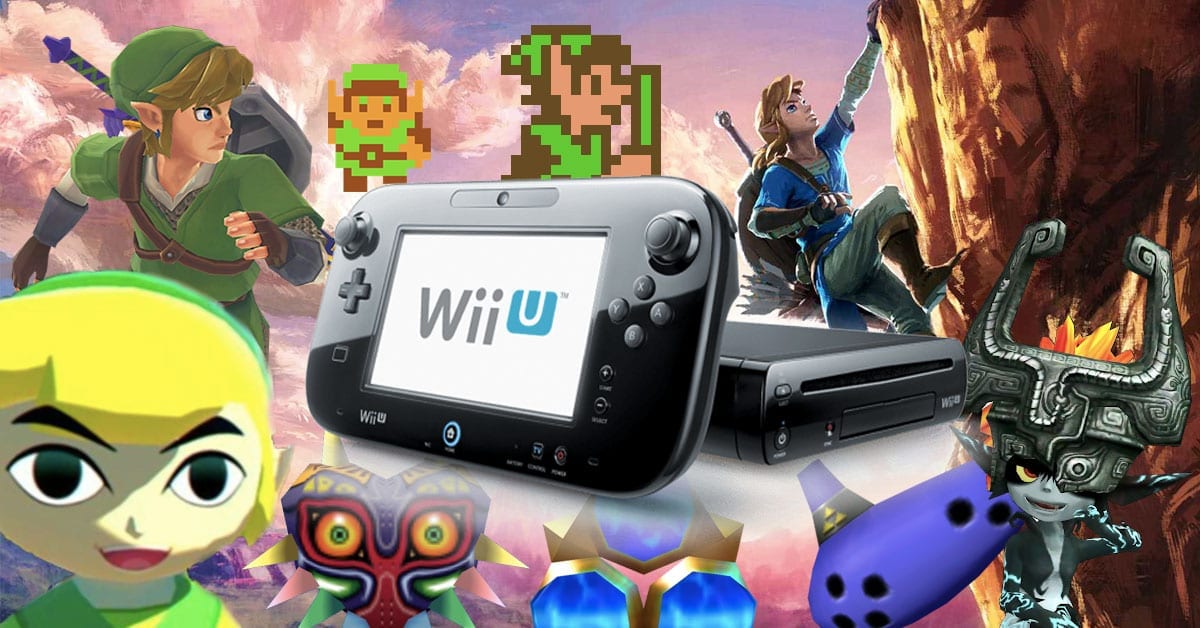 2021 marks the 35th anniversary of The Legend of Zelda, and Nintendo is (hopefully) gearing up to celebrate the big event. Unfortunately, the Nintendo Switch is severely lacking in Zelda titles, with classics like Ocarina of Time and Wind Waker being entirely absent from the console. This is something that fans hoped would be remedied in the form of some sort of collection, similar to Mario’s 3D All-Stars compilation.

Alas, anything of the sort has yet to be announced. February’s Nintendo Direct event graced us with the news of a Skyward Sword HD remaster but was otherwise lacking when it comes to the Hyrule fantasy. However, there is actually a way to play almost every single Zelda game on one Nintendo console. This will sound slightly unorthodox to any Nintendo fan, but hear me out: it involves getting hold of a Wii U.

The Wii U is a complete anomaly. As a console, it lives in the shadow of the immensely popular Wii while often being mistaken for its predecessor. The console’s design is also something of an enigma, featuring an unwieldy controller that also acts as a display screen. The Wii U was dead on arrival, doomed by its ageing Wii branding and dismal sales figures. Despite this, the Wii U facilitates some of the best Nintendo games of the modern era, many of which have since been ported to the Switch. It’s also home to a comprehensive collection of retro games, thanks to the Nintendo eShop’s expansive Virtual Console library.

The Nintendo eShop is an entirely different beast on Wii U compared to the Switch. The eShop’s secret weapon, the Virtual Console, allowed the Wii U and 3DS to retain years of Nintendo classics under one storefront. This has been omitted from the likes of the Switch, which operates under an entirely different ecosystem. Unfortunately, this means that the Switch’s back catalogue access is extremely limited, lacking even the most obvious classics. Nintendo has tried to fill this gap with its online service perks in the form of NES and SNES games, but there’s still a lot to be desired.

The Virtual Console capabilities might be tied to the Wii’s antiquated legacy, but this is precisely what makes it so great. When it comes to Zelda games, the Wii U can play almost all of them, thanks to the eShop’s legacy support. From the original NES, SNES and N64 classics to even more obscure titles like the Nintendo DS’s Phantom Hourglass and Spirit Tracks, the eShop allows users to simply buy, download and play a large chunk of Zelda’s legacy. Playing these titles has never been easier, especially since hooking up old consoles to new TVs is more complicated than ever before.

While access to games like Majora’s Mask might be coveted for some, others might be in search of a way to play modern Zelda classics. Thankfully, the Wii U has this covered in the form of HD remasters. The Wii U was lucky to receive HD versions of both Wind Waker and Twilight Princess, both of which are available physically or via the eShop.

Featuring HD graphics and rejuvenated textures, these games have never looked better. Twilight Princess, in particular, is based on the GameCube release of the game and not the Wii version. This means players are no longer confined to using motion controls. Of course, motion controls are always an option, and the Wii version of the game is actually also playable, thanks to backwards compatibility.

Speaking of backwards compatibility, this fabled feature was once pride of place within Nintendo consoles. Fortunately, the Wii U takes full advantage of Wii compatibility, meaning we can also play games like Skyward Sword. Playing Wii games on the Wii U comes with some upscaling benefits and a cleaner video signal over HDMI, but the experience is otherwise the same as on the Wii. Providing you’ve got a Wii Motion Plus controller, you can add Skyward Sword to the Wii U’s board range of Zelda titles.

Remember Link’s Crossbow Training? Of course, you do! It’s a Wii exclusive that featured a range of target practising mini-games. The game plays like a lightgun game, with the back of its box recommending the use of a Wii Zapper attachment (because saying “gun” is bad, mmkay?). The fact that you can play this obscure spinoff in conjunction with the rest of the series on the one console really hammers home the experience the Wii U can offer to Zelda fans.

It’s worth mentioning that Breath of the Wild on the Wii U isn’t the best way to play in terms of performance, but it is practically still the same game. Initially, the Wii U version was supposed to have Gamepad capabilities, such as an onscreen map and potentially Sheikah Slate functionality. Ultimately, this was stripped from the Wii U version to keep both versions consistent, which is a pity. Still, it’s incredible that the game managed to make its way onto the Wii U library.

Most of the games mentioned above can be played using either the Wii’s classic controller or a GameCube controller utilising an adapter. It’s a small gesture, but it’s one that makes all the difference when it comes to Zelda games. Playing most of the series using a GameCube controller feels special, especially brought up with Nintendo’s infamous cube. Having a variety of controllers available to use also means you don’t have to use the Wii U GamePad, which is an ergonomic risk waiting to happen.

There are, of course, a few Zelda games that didn’t make it to the Wii U. While most of the Zelda series is playable on the console, quite a few games are 3DS exclusives. This is largely down to their 3D capabilities, as games like A Link Between Worlds have been designed with this in mind. There are also various Game Boy classics, like Link’s Awakening, and Oracle of Ages/Seasons, which are all exclusive to the handheld. This means that if you want to have every Zelda game at your disposal, it could be worth picking up at 3DS while you shop for that pre-owned Wii U.

Let’s face it; the Wii U has been consigned to history by Nintendo and gamers alike. Nevertheless, the Wii U provides the most comprehensive Zelda experience out of any console to date. Sure, sometimes authentic is best, but if you just want hassle-free access to the Zelda series, then Nintendo’s ugly duckling is where it’s at. Who knows, maybe Nintendo is working on bringing all the Zelda games to the Switch as we speak. But why wait? I’d personally download and buy the Wii U’s back catalogue of Zelda games before Nintendo shuts it all down.

The Wii U is now no longer in production, but you can pick one up second-hand from wherever you prefer to buy your second-hand tech.

For reference, here’s a list of every Zelda game that’s playable via the Wii U: