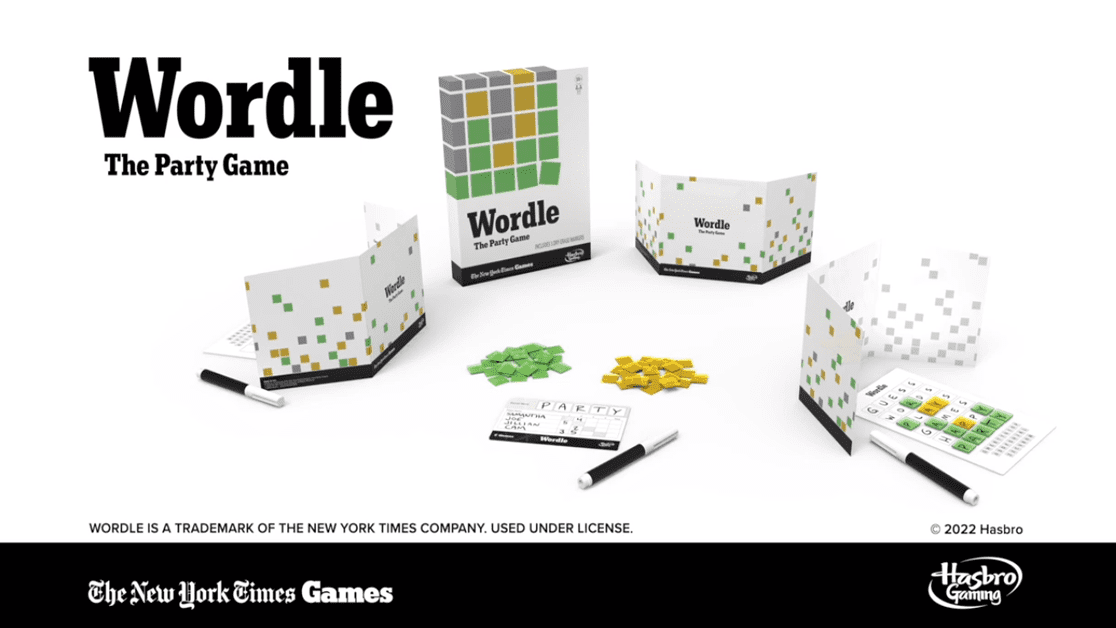 Hasbro and New York Times Gaming have collaborated to release a physical version of Wordle, releasing this October.

If you’ve ever wanted to see your friends and family’s reactions to your Wordle skills in person, instead of just gloating on social media, now you can! Hasbro and the New York Times Games have collaborated to release the 5-letter word guessing game as a physical board game.

At the start of 2022, it was announced that the New York Times had bought Wordle, which originally appeared on an ad-free website in October of last year. Many feared what would come after the acquisition. Especially as the New York Times uses paywalls for its articles, while part of the main attraction to playing World is because it’s free, and therefore more accessible.

Instead of forcing people to pay to keep playing Worlde, hijacking the Wordle website with a myriad of ads, they chose to first team up with Hasbro to create a physical board game.

‘Wordle: The Party Game’, will be a brand-new board game, inspired by the popular digital version from New York Times Games.

“Since Wordle burst onto the scene, it’s undoubtedly been a staple in social and pop culture vocabulary,” noted Adam Biehl, the SVP and General Manager of Hasbro Gaming, in the Wordle: The Party Game press release.

“We’re beyond thrilled to work with New York Times Games to bring our gaming worlds together and extend Wordle in new ways.”

Pokemon Wordle Is Now A Thing, Thanks To New Fan-Made Game

How does a physical Wordle work?

Normally, when playing Wordle online, you have six tries to guess a five-letter word. Every time you make a guess, you’re told if any of the letters you’ve chosen are part of the word and if they’re in the correct place or not.

In Wordle: The Party Game you designate a player as the Wordle Host. They’ll be in charge of picking and writing down the ‘secret word’ for the game.

The physical version of the game comes with a dry-erase board and markers, so you can play repeatedly. And includes different play-style options, classic play, fast, timed or teams.

When playing Wordle online, the game will automatically light up letters yellow or green, to indicate if they’re part of the word you’re trying to guess. For the board game, there are small transparent squares in yellow and green that the host will have to physically place on a place’s dry-erase board over the letters.

You could argue that a physical version of Worlde goes against part of the reason behind the popularity of the game in the first place.

The original game is highly accessible and works from a web browser. You don’t even need to try and find space on your phone to download an app. Just a simple visit to New York Times’s Wordle page and you can play.

The original Wordle also allows you to share your progress each day through social media. Which for many is a huge draw to the game overall.

Or so I assume with how often my social media timelines would be nothing but green and yellow blocks.

That aspect will be lacking with the physical board game version. Unless you want to be awkward and take constant photos during a family board game night.

If the premise of a physical version of Wordle still interests you, Wordle: The Party Game releases on October 1st and can be pre-ordered right now.