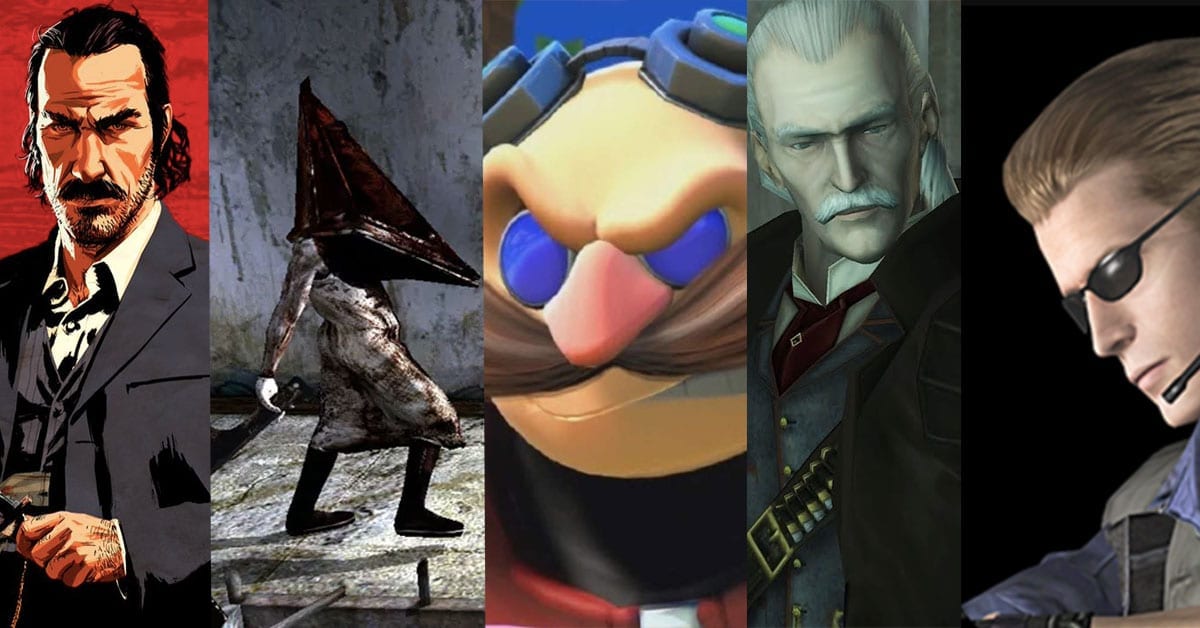 I’ve already discussed my favourite kick-ass male and women heroes, as well as the most badass women villains in video games. Now we’re topping off the series with the most badass male villains we all love!

As with my previous features, I’ve limited this article to just six characters and I’ll be sticking to just one character per franchise. So with that said, here are my favourite badass male villains in video games.

Known as Bowser, King Koopa, or Daimaō a.k.a the “Great Demon King”, this villain has been a constant mainstay in the Super Mario series since the 1980s.

When Super Mario launched for the NES back in 1985, due to console limitations, Bowser was simply a large spiked turtle-thing that camped on a bridge. At the end of each level Mario has to jump over him and plonk him in a pool of lava.

However, over the years Bowser evolved. Much like Godzilla he grew larger and more powerful with every release of the Super Mario franchise. He’s now practically a Mega-Evolved form of Bowser in the 2021 hit, Super Mario 3D World + Bowser’s Fury.

On the surface Bowser might not be the most sinister of villains in video game history, though he is certainly one of the most iconic. However, he does have a thing about kidnapping Princess Peach. At some stage Bowser, that’s got to stop, ok?

Dr Robotnik (or Dr. Eggman depending on where you’re from) is up there with Bowser as one of the most iconic villains in video game history. Robotnik made his first appearance in the original Sonic the Hedgehog for the SEGA Mega Drive (or Genesis) back in 1991.

Robotnik has appeared in just about every Sonic the Hedgehog game there has ever been, and other than the surprisingly decent 2020 movie, his appearance and motives have largely remained the same. Robotnik is a mad, genius scientist that has plans to take over the world with his loyal machines often dubbed the “Badniks”.

Thankfully however, everyone’s favourite speedy, blue hedgehog is always on the case and remains a constant thorn in Robotnik’s side.

Moving away from iconic mascots of Nintendo and SEGA, we’re now moving into the territory of the more sinister villains, beginning with the one and only Albert Wesker from Resident Evil.

This quote from Resident Evil 5 pretty much sums up Albert Wesker: “Let me clarify something for you, Chris. I don’t think of myself as a King. No, I am a god! And even Kings bow down to Gods.”

We first met Wesker in the original Resident Evil from 1996, and while the iconic villain has not featured in every game in the series, when he’s appeared he’s always left a lasting impression.

A high–ranking Umbrella scientist and a double-agent at S.T.A.R.S, Wesker is responsible for most of the bad things that have happened in the Resident Evil series. His worst criminal act? Making us believe, even for a split-second, that the lovable Barry Burton might have been a bad guy. Damn you Albert Wesker, damn you!

Dutch van der Linde was the antagonist in the original Red Dead Redemption in 2010, and was merely the bad guy to help progress the story of protagonist John Marston. It wasn’t until the 2018 prequel (despite having a name of a sequel) that we learned a lot more about Dutch.

In Red Dead Redemption 2 you play as Arthur Morgan, Dutch’s right-hand man. We see Dutch evolve from a lovable father figure that would seemingly take a bullet for his family of misfits, to something more ghastly.

When Micah Bell is introduced into the group, we slowly see Dutch evolve into an angry, bitter, cruel and paranoid man. Micah could have easily made this list instead of Dutch, but watching the character of Dutch slowly becoming one of the most heart-wrenching villains I’ve ever encountered, he had to make this list.

In my personal opinion, Revolver Ocelot is the most complex villain on this list. From the first Ocelot encounter in the original Metal Gear Solid in 1998, to MGS2 (2001) and MGS4 (2008), there was no question to me that he was a bad guy.

He’s equally as charismatic as he was before and has a mean side, but he also does plenty of good things. He’s also the loyal friend and companion of Venom Snake. Oh, and he loves Spaghetti Westerns! By the time MGS5 arrived I was so confused, I am supposed to like or hate this guy?

His constant desires to cause a world war, and his role as a master manipulator definitely plant him in the “villain” camp. If it came down to achieving his goal of changing the world to his vision, Revolver Ocelot would probably stab his closest family and friends in the back. So yeah, I might love this guy, but make no mistake, he’s a bad guy for sure.

Red Pyramid Thing is better known as Pyramid Head. This horrific humanoid monster first terrorised our nightmares in one of the greatest horror video games of all time, Silent Hill 2 (2001).

Pyramid Head was a manifestation of protagonist James Sunderland’s inner guilt, serving as a torturous reminder of what James is and what he’s done. Said to be around 7ft tall, Pyramid Head wears a red, rusty, bloodstained helmet and butcher-inspired attire which is said to resemble that of the executioner in Silent Hill historty. Pyramid Head drags a giant weapon known as the Great Knife, and when you hear that loud screech and scratch, you know that you’re in big trouble.

In Silent Hill 2, Pyramid Head quickly becomes an iconic villain and will go down as one of the greatest monsters in video game history.

This is why developers and writers have since found any excuse to include him in later Silent Hill games and the two movies, despite being intended to be unique to James Sunderland.  Silent Hill: Homecoming even had its own Pyramid Head-style villain named “The Bogeyman”.

I’ll give him a pass in the 2006 Silent Hill movie, not because the movie was particularly good, but out of curiosity of what Pyramid Head might look like in a live-action movie. Still, it doesn’t matter when, how, or why Pyramid Head makes an appearance, because he’ll forever be the creature of your worst nightmares.