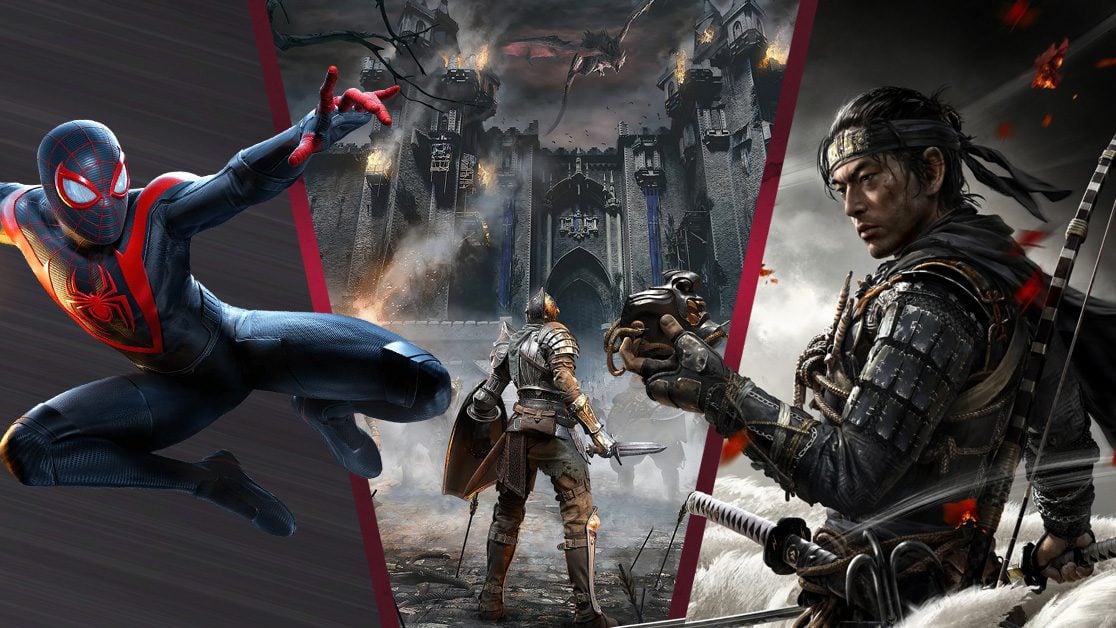 If you’re looking for the leading games among a particular genre, why not check out the best platformers to play right now? Or how about this year’s games that are still to come? In that case, you can check on the video game release dates for 2022.

Although cross-platform, Marvel’s Spider-Man Miles Morales swung in hard as a best-selling PS5 launch game. This game remains one of the best on PS5 today and it’s not hard to see why.

A sequel to 2018’s Marvel’s Spider-Man, Miles Morales sees its namesake protagonist try to establish his own take on the Spider-Man mantle – whilst discovering his own unique set of powers on the way. An exciting set of gameplay tweaks combined with its own tighter-yet-touching narrative. Miles Morales remains a unique experience for both newcomers and those who played Insomniac’s first game.

In addition to upgraded visuals and haptic feedback on the DualSense controller, Marvel’s Spider-Man: Miles Morales comes with a choice of visual modes depending on your preference. Originally having to choose between 60FPS and 4K raytracing, a post-launch patch introduced a Performance RT mode – aiming for 60FPS at a 1440p resolution.

Marvel’s Spider-Man: Miles Morales on PS5 is available to buy at the GameByte Shop from £34.95.

Another hit from Insomniac Games. A sequel to 2016’s Ratchet and Clank, Rift Apart stands on its own as an absolute blast. Back with the series’ wholesome and lovable titular duo, you’re set on a cross-dimensional journey to thwart an evil robotic emperor – because video games. A PS5 exclusive, this third-person platformer is a demonstration of what the console is capable of.

A fun, colourful, and well-written adventure in its own right, the PlayStation 5’s high speed SSD fuels rapid load times kick in during Rift Apart’s near-instantaneous shifts to other dimensions, adding to the breathtaking gameplay at your disposal. At Rift Apart’s core, not much new has been added following the first game; it’s just honed in and improved on what made it already perfect.

Ratchet & Clank: Rift Apart is available to buy at the GameByte Shop for £46.95.

Not for the casual gamer, but that’s part of what’s made Blue Point’s Demon’s Souls one of the best launch titles for a PlayStation console in recent memory. Even if you’re a seasoned pro at the original developer FromSoftware’s Soulsborne games, this magnificently crafted remake crafted from the ground up delivers both some of the most intense battles and best visuals possible. Demon’s Souls is a gruelling, challenging adventure – making victory feel all the more rewarding.

Like its plot and the deliciously weird world Bugsnax is set in, there’s a lot more to this adventure game than meets the eye. In a land where you’re tasked with catching a buffet’s worth of sentient food-based lifeforms, you’re also assigned with solving the deep mystery of Snaxtooth Island and the events surrounding the small society established by its new inhabitants.

Meanwhile, the core gameplay itself is fascinatingly Pokemon-esque, forcing you to utilise strategy and the tools at your disposal to collect them all in a scrumptious safari. Bugsnax is the finest combination of goofy and dark you’ll find among the PS5 games on offer.

Bugsnax on PS5 is available to buy at the GameByte Shop for £33.95.

Already a gorgeous spectacle of a game on PS4, Ghost of Tsushima: Director’s Cut is remarkably even better when playing on PS5. Superior load times, 60FPS, and 4K graphics are made all the sweeter by the upgrade’s added DualSense support. Feeling that extra pull when drawing your bow never gets old.

Together with its original campaign, the tale of a lone samurai on a revenge path against Mongol invaders, comes the Iki Island expansion. Adding a whole new land to explore, missions to triumph, an expanded story, and new enemies to slaughter, Ghost of Tsushima: Director’s Cut is one of the most epic games to play on PS5.

Ghost of Tsushima Director’s Cut on PS5 is available to buy at the GameByte Shop for £44.95.