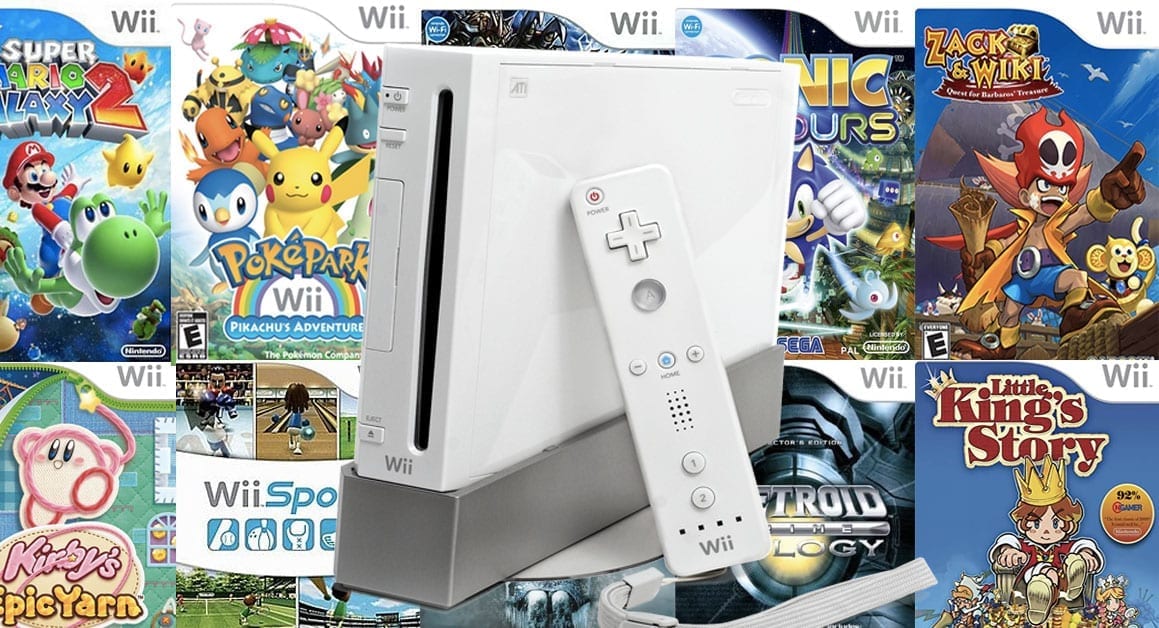 The Nintendo Wii was a veritable rollercoaster of quality when it came to the video games on offer. For every Super Mario Galaxy, you had 40 dreadful time-wasters like Ninjabread Man. With Nintendo now confirming that The Legend of Zelda Skyward Sword is headed to Nintendo Switch, my mind’s racing as to what other gems need a bit of tender loving care. Following on from my top 10 Nintendo DS choices, here are 10 Wii games that would be amazing for HD porting on the Nintendo Switch.

Wii Sports and Wii Sports Resort are needed on Nintendo Switch. Time is up Nintendo, the fans have spoken. The new Nintendo Ring Fit Adventure might be getting us out of our chairs already, but nothing feels better than hitting a home run and watching the awkward Mr Bean Mii you spent far too long perfecting running like the wind.

Seeing as Wii Sports became the flagship for family games of the Wii, popularising the console and the concept of making a Mii in the first place, it’s strange how little play they’ve had in the current era.

While the Nintendo Wii U and the Nintendo 3DS fully embraced the Mii, the Switch has shied away from the iconic character-making system somewhat. With the grand return of Miis in the upcoming port of Miitopia this could be a sign that Nintendo is ready to start playing around with these amazing little guys once more.

Zack and Wiki: Quest for Barbaros’ Treasure is a beautiful game. It can make you pull out all your hair while you’re failing a puzzle for the 30th time in a row, but you can’t deny how flipping pretty this game is.

If you like yourself a point-and-click, then grab a sword and jump aboard, as these adorable cel-shaded pirates hunt through a puzzle-infested island to find a mysterious treasure. The plot is as classic as you can get, with some cute visuals and a never-ending barrage of brainteasers.

Using the Wii remotes in strange ways, like for ringing bells and pulling ropes, it would be exciting to see Nintendo make use of the Joy Cons and their full range of options. The early 2000s really took this rich cel-shaded approach, and the game looks fantastic to this day, even on the Wii. Seeing these rich colours pop-out on the Switch would make this game a must-play for sure.

At the time, Sonic Colors was seen as a return to form for the titular mammal, cutting out the controversial gameplay styles of Sonic Unleashed and just going back to nothing but Sonic. While emotions do change with time (and the then-fresh writing may not have aged so well), I doubt many fans would complain about seeing the bright and beautiful world of Eggman’s Interstellar Amusement Park with something more than the Wii’s graphical capability.

Some of the criticism for the level structure of Sonic Colors comes from their short and snappy layouts. Instead of long and lavish levels, the team here decided to break down each act into several shorter levels, more akin to his rival Mario.

Making the change to the Switch could really lend itself to this level style, being able to do a little level while in a short car ride, or while getting the train. Who knows if the team would want to re-record any dialogue though, with the Colors’ voice actor recently departing from SEGA.

Did you think the Wii was only for children’s games? Au contraire! Hidden away in the Wii’s back catalogue we have some very dark gems. We saw one of the best adult Wii games already ported to Switch just a few months ago with the No More Heroes franchise, making these hard-to-find cult classics accessible to all. Clearly Nintendo still cares about its grown-ups gamers.

Silent Hill: Shattered Memories was that one creepy Wii game as a child that you always wondered whether you’d be brave enough to play, but secretly were glad that you didn’t have to find out.

This game, a very loose reimagining of the first Silent Hill game, is a masterpiece of suspense, taking actions that players might not even notice into account at all times. For example, did you stare too long at a naughty adult poster? Well, now your character is now progressing more down to a more sexualised path in the game.

It’s these subtle but impactful choices that really tailor your spooky experience. This is one that needs to be played to be appreciated fully, and a lick of fresh HD attention could really take the horror to the next level.

Remember that Nintendo announced Metroid Prime 4 back in 2017? I’d almost forgotten too, because we’ve heard next-to-nothing, except for game-development hiccups that are slowing it down. The developers have to come out and talk about it again eventually, and what better way to sweeten the news than by dropping an amazing port of the Metroid Prime Trilogy alongside?

Comprised of the two original Nintendo GameCube remasters and the third Wii-exclusive addition, this trilogy is near-and-dear to the hearts of many a Nintendo fan.

While we have so many amazing indie games hitting the classic Metroidvania genre perfectly, it would be nice to see a return to the 3D-style that is much less recreated. Give us Metroid Prime: Trilogy on Switch ASAP!

Mario games tend to look amazing, have tight controls and bring fun for all the family. But would you ever associate the word “cool” with Mario? No? Then you clearly haven’t played Mario Strikers Charged Football.

The Mario Strikers series are hyper-aggressive football games featuring your favourite characters from the Mushroom Kingdom. Why? Why not!

Following on from the original on the Nintendo GameCube, Charged takes the gameplay and style up-to-11. Every character has their own unique themes and surprisingly stellar animations. Waluigi crotch thrusts, Bowser Jr. kicks up a tantrum like a baby and Daisy literally motions to put a cigarette out on her bum.

When even Mario Golf is getting the HD superstar treatment, it’s mind-boggling that the sports game that actually bothered to go the extra mile hasn’t gotten any love since 2007. Good news though, with Nintendo purchasing Next Level Games, the studio behind the Strikers series, we may be closer to this now than ever before.

Pokemon spin-offs are probably up there with Mario in terms of bold new directions we didn’t see coming. Whether you’re launching Beyblades in Pokemon Ranger or spelunking with the Mystery Dungeon series, Generations 3 and 4 saw some really creative shake-ups to the series.

While recent new projects are still coming, it would be nice to see some love for the weird and wonderful projects that have gone by.

PokePark Wii: Pikachu’s Adventure and the sequel PokePark 2: Wonders Beyond are maybe the most adorable games the franchise has gotten so far. Pikachu and the gang explore a mini-game packed world that is brimming with life and charm.

You can swing through vines as Infernape, race through the water as Feraligatr, and enjoy man other cute party games. While there might not quite be enough meat on the bones for a full-price re-release, package these two together and might just have a solid little bundle on your hands.

Combining the gameplay of Pikmin with a quest to conquer the world, Little King’s Story is a strange game indeed, and all the better for it! Take the reigns of a child with a magic crown that forces people to obey his orders, with a party of questionable advisors influencing you. As you brain-control more citizens to expand your little kingdom, you’re suddenly forced to make your world-leader debut as the neighbouring kingdoms declare war on you one-by-one.

This game screams charm, from the cutesy character designs to the trance-inducing soundtrack. Never has war been so child-friendly! You can even get married, collecting various princesses from each of the kingdoms you conquer.

I’m not sure what a child needs from their own harem, but it’s just another quirky feature of this often overlooked classic. Bring it to Switch, damn you!

Kirby’s Epic Yarn game is very cute. While I suppose almost all Kirby games hit that mark pretty well, this game took it to a new level back in 2010, overhauling the entire Kirby aesthetic into an adorable arts-and-crafts adventure.

While Nintendo has dipped back into the same style for Yoshi’s Woolly World in 2015, nothing hits quite as well as Kirby’s fist epic outing.

Nintendo already gave this game a bit of extra love back in 2019 when they ported Kirby’s Extra Epic Yarn to 3DS, but with the DS family long-retired now it’s about time we got to experience this yarn in HD. Come on Nintendo, we deserve this classic Wii game on Switch!

Super Mario Galaxy 2 not being included in the Super Mario 3D All-Stars collection was a strange decision for many, being as beloved (if not more) than the original title. This game builds upon the strong points of the original, throwing in more levels, shiny-new power-ups and even bringing back the fan-favourite Yoshi.

With the huge sale rates of this trilogy, another set of ports have to come eventually. While it may be cynical to think that Nintendo would remaster Galaxy 2 as a full-priced stand-alone title on the Switch store, I think more people would prefer it as a cheaper DLC add-on to the previous set.

We can only cross our fingers and hope it doesn’t take another 35 years to play Throwback Galaxy in glorious HD!

Can you think of any other classic Nintendo Wii games deserving of a Switch port? Then why not check us out on Facebook and on YouTube, and let us know what you think!