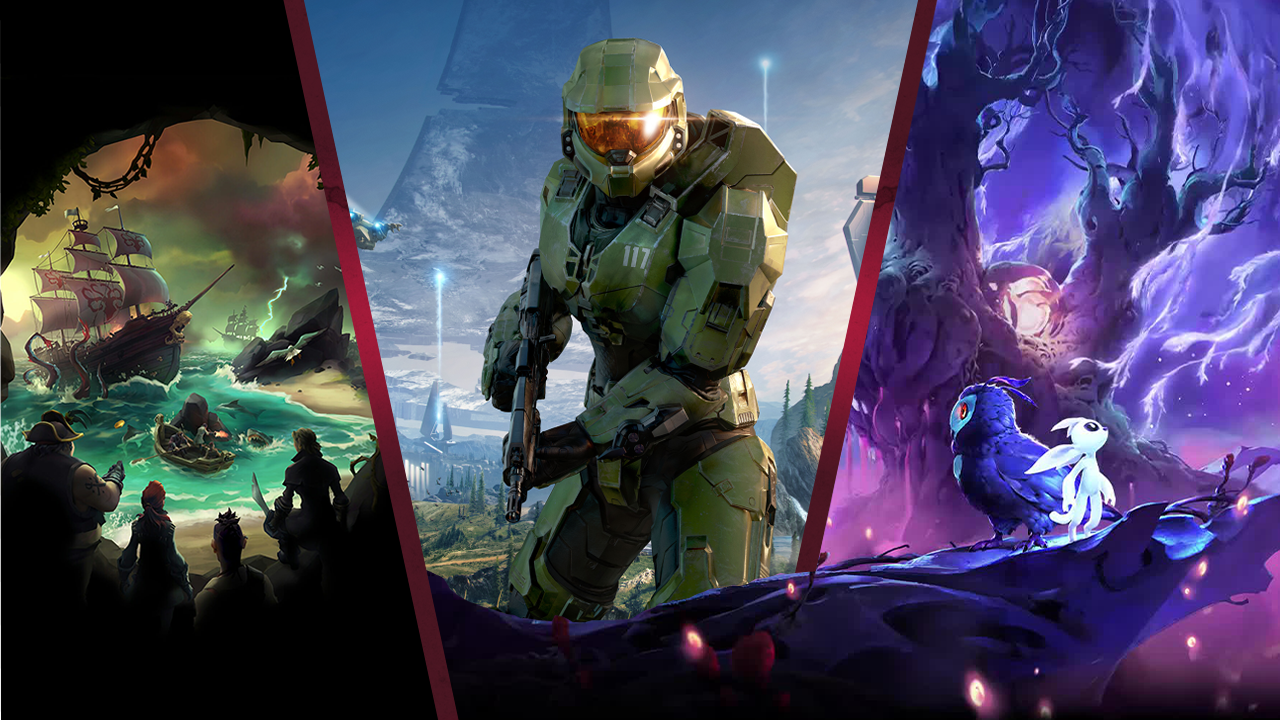 Although having a rough start to the Xbox One generation, Microsoft seems to have redeemed itself as a gaming brand. Thanks to high-value services like Game Pass and the technical prowess of its new consoles, the Series X and S, Xbox has truly re-established itself as a gaming platform. Among the many exquisite titles available in its catalogue, from first-to-third party titles, here are the 7 best Xbox Series X and S games you can play right now.

Many of the latest and greatest games for Xbox Series X are available to buy at the GameByte Shop. On any games you buy, including the biggest new titles like Elden Ring and LEGO Star Wars: The Skywalker Saga, you’ll be able to sign up and earn GameByte Loyalty Points for epic discounts.

Looking for one of the upcoming 2022 Xbox games? Checkout out our 2022 video game release schedule.

A collaboration with Game of Thrones’ Song of Fire and Ice author, George R. R. Martin, FromSoftware’s Elden Ring is even greater than the sum of the minds that brought it together.

From the developer who brought us Dark Souls and Bloodbourne, the adventure in the Lands Between feels like the natural and triumphant next step both in terms of gameplay and story. Under that same scope, even though Elden Ring is the most approachable for non-Soulsbourne players, this action RPG is just as challenging and even punishing for Tarnished who aren’t used to having little-to-no room for error.

Nevertheless, even in a massive dark fantasy world, that same sense of harrowing difficulty feels earned. Further to that, it’s what makes Elden Ring so fantastic. By raising the bar for victory, at the same time immersing you in the game’s dense universe and lore, every win – even those which took dozens of tries to achieve – feels simply euphoric. If you’re looking for that perfect mix of gameplay and story, Elden Ring is the best FromSoftware game yet.

Elden Ring is available to buy now at the GameByte Shop from £42.95.

What do you think is the best game to play on Xbox Series X/S? Let us know across our socials, like our Twitter or our Discord.

The latest in developer The Coalition’s iconic third-person shooter gaming series, Gears 5 is a sure-fire go-to for scratching that heavy itch one might have for gore and intense action. Whilst Gears of War 4 felt like a transition – bridging its story and gameplay between the old and new – Gears 5 is the culmination of that next step forward.

For Gears of War players old and new, Gears 5 is a perfect entry point in terms of story, visuals and performance. Focusing on Gears of War 4 cast member, Kait Diaz, as the new protagonist, Gears 5 takes the opportunity to be an excellent start for those who’ve never played a Gears game.

Meanwhile, Gears 5 has been optimised exquisitely for the Xbox Series X – sporting native 4K graphics and 60FPS performance. For those lucky few who own a supportable 4K TV, there’s even a 120hz performance mode, adding ultra-fast responsiveness to the experience.

Whether you prefer to just enjoy the single-player campaign, or three-player split screen and online co-op with your friends, Gears 5 is a must-play.

Ori and the Will of the wisps

Among the most breath-taking Metroidvanias in years, Ori and the Blind Forest seemed hard to top. Critically acclaimed in its own right, its sequel, Ori and the Will of the Wisps, surpassed that preconception. Once again journeying as Ori through a whimsical fantasy realm, Will of the Wisp’s jaw-dropping art blends with its engaging platform mechanics, enchanting score, and wondrous world often populated by creepy foes.

The result – a gem that shines even brighter when paired with the Xbox Series X and S’ optimised upgrades. Utilising the Xbox Series X/S’ Smart Delivery, Ori and the Will of the Wisps runs up to a super-smooth 120FPS. Combined with 4K and HDR, this magical platform adventure feels like you’re playing a storybook come to life.

Speeding in after a 3-year wait since the last game in the Forza series, Forza Horizon 5 is an open-world demonstration of what the Xbox Series X is capable of – along with that of racing games itself.

Playground Games looked to develop a new game in which the scale was far bigger than those that came before. Set in Mexico, Forza Horizon 5 achieves just that with not only a massive range of landscapes, tracks, and cars to drive them in – but all are showcased in superbly impeccable detail.

Furthermore, with sublime levels of realism in its gameplay – the way each car handles in conjunction with smooth and responsive controls – the thrill that comes with those first few driving experiences never gets old. Forza Horizon 5 is a contender for one of the greatest racing games yet.

Forza Horizon 5 is available to buy now at the GameByte Shop for £48.95.

Gaming is among the most flexible mediums for innovation. Where that comes from, however, can be in the most surprising places. Most recently, that change to the formula comes from Unpacking: a hi-res pixel art puzzle game where actions speaking far louder than words.

Starting from the year 1997, each level puts you in the varied homes over the years of a woman’s life – tasking you with unpacking her possessions and finding the right spot for each. With no dialogue whatsoever, it’s the simple gameplay itself that tells a powerful story in a unique, captivating way.

For Xbox games you can play in one night, Unpacking sits among the elite.

Following a rough 2018 voyage into Xbox’s first-party line-up, Rare’s Sea of Thieves found its bearings and beyond as an open-world action-adventure experience. Continuously updated with new content over the years, Sea of Thieves has really steered into its co-operative seafaring strengths to make it one of the most fun multiplayer games to enjoy online with your friends.

Adding to its added epic storylines, sea combat, and raids, is that delightful 4K and 60FPS performance via Smart Delivery. Among the co-op multiplayer games to play on Xbox Series X/S, Sea of Thieves is one of the best.

Sea of Thieves is available to buy now at the GameByte Shop for £24.95.

From establishing a Viking settlement and travelling and raiding across a vast map in your longship, to the game’s multi-layered yet brutal combat, Valhalla is medieval fantasy combat at its finest.

With several delays putting off Halo Infinite’s release, the quality of its final product was up in the air. Thankfully, 343 Industries’ long-awaited first-person shooter is the return to form fans were looking for, and the best the series has been in years.

Going back to the series’ roots, Halo Infinite brings what made the first games so beloved to the modern era – along with some fantastic additions for traversal and combat like the grappling hook. Of course, you’ll be getting more than the action-packed cinematic campaign in a semi-open world. With the multiplayer bringing ground-breaking and exciting modes like Arena or Big Team Battle, you’ll have endless creative combat possibilities at your disposal.

If you’re keen to check out some of our other lists, such as the best PS5 games and best Nintendo Switch games to play right now.